“It doesn’t make sense! None of this makes any sense!” 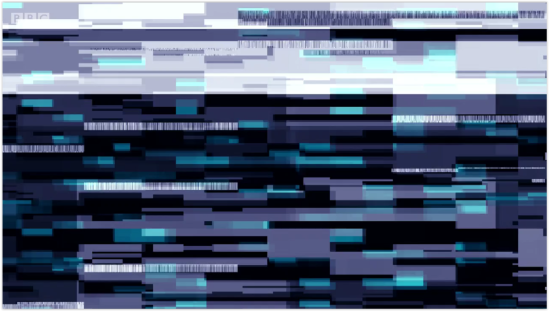 It’s good that Doctor Who has, since its revival, not been afraid to experiment with narrative form and structure. I know it’s divisive, but I really enjoyed Love and Monsters, the first ‘Doctor-lite’ episode, and that format has generally worked well – Blink, Turn Left and so on. However, when the plot starts to serve your narrative gimmick rather than the other way round, you’ll get problems.

The show’s previous attempt at lifting high-concept conceits from Hollywood, ‘real-time thriller’ 42, wasn’t exactly a roaring success. And, sad to say, neither is Sleep No More, which wastes an intriguing premise and some good sci-fi ideas in its eagerness to adhere to the rather done to death ‘found footage’ format now so tiresomely prevalent in all low-budget horror films.

The found footage style has both opportunities and problems, both of which stem from the limitations in perspective. Most TV drama stories have an ‘omniscient narrator’ – that is to say, we can see events from whichever perspective the writer deems necessary for the reaction s/he’s trying to instil in the audience.

Found footage, though, necessarily presents each shot from the perspective of just one character, with the further complication that (as in this case) the compiler of the footage may have his/her own agenda in how it’s presented. Done well, this can be an interesting exercise in unreliable narration. Done badly – as it felt like here – and you get a confusing mess that doesn’t make a lot of sense. And having the Doctor point that out doesn’t excuse it.

To a certain extent, I feel some sympathy for Mark Gatiss, a talented writer and lifelong Doctor Who fan who, for some reason, has never been able to write an actual episode of the show that really works. The closest he came was the genuinely enjoyable Crimson Horror, which played to his strengths of grand guignol exaggerated to the point of black humour.

Sadly though, his exercises in trying to come up with actual, straight-faced horror have been far less successful. To some extent, that’s not his fault in this case. One of the problems I had with the episode in general was a sense of over-familiarity, which is due as much to other stories this year as to any fault of the writer. The base under siege, the corridors, the sliding doors, the system failures threatening imminent destruction – we saw all of this only a few weeks ago, in Toby Whithouse’s equally trad but much better Under the Lake/Before the Flood two-parter. Not to mention Aliens, which the show seems to have ripped off dozens of times by now.

To give Gatiss his due, there are some genuinely interesting, imaginative concepts in play here. The central concept, of a machine that can “compress sleep” to keep you working more of the day, is truly original – and I was glad to see that Clara’s reaction to the idea was one of revulsion, a view shared by neo-Luddite holdout Chopra. I have the horrible feeling that a number of CEOs thought it was a brilliant idea, and wouldn’t be surprised to find some tech company starting work on it this week. 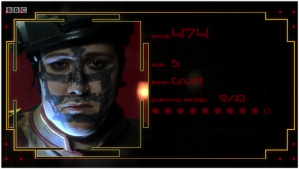 Also on the ethical front (though rather less original), there was some well-expressed disgust (again from Clara) at the idea of the military deliberately ‘breeding’ high-strength, low-intelligence humans purely to be used as expendable weapons. Standup comic Bethany Black gave a marvellously sympathetic performance as ‘Grunt 474’, and one of Gatiss’ better ideas was to split up the characters and pair her off with techno-sceptic Chopra (played well by the genuinely “pretty” Neet Mohan). His thawing towards his artificially created comrade was a good character arc, especially when she actually sacrificed herself to save him. Which didn’t work, sadly.

I also enjoyed the fleeting references to monumental future events such as “the Great Catastrophe”, which somehow tectonically “joined” India and Japan (best not to think about the science on that one). There was a real feel of diversity to the casting of the rescue team, with only the ‘Grunt’ being played by a Caucasian; and it was refreshing to have the nominally Japanese character (Elaine Tan’s Nagata) speaking with what sounded like a Geordie accent. 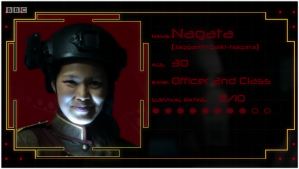 Reading all the above, I realise it sounds like I quite liked the episode. Unfortunately, even with all these good points, it came across to me as a jumbled, incoherent mess. There are a few reasons I felt that way; the first of which is Gatiss’ self-avowed desire to imitate his writing idol Steven Moffat, in coming up with a high concept monster that plays on the primal fears of children.

Trouble is, the monstrous ‘Sandmen’ (sensibly kept to fleeting glimpses by director Justin Molotnikov), reminded me of nothing so much as the burned ‘time zombies’ in Journey to the Centre of the TARDIS. And as every schoolboy knows, that stuff that congeals in the corners of your eyes when you’re asleep is actually mucus. So what Gatiss gave us here was the less-than-terrifying idea of monsters made out of snot; that feels more like an idea suited to Red Dwarf, which once presented us with a monster made out of mutton vindaloo. Which was actually scarier.

Then there was the pacing of the thing. Apparently this was originally intended as another of this year’s many two-parters, but was then pared down to a standalone episode. I don’t know whether that was because its original form had too much padding; but compressing it to what we got here felt frenzied and rushed. I don’t like excessive exposition, but what little there was here as breathlessly gabbled out with such speed it was impossible to take in, which didn’t help a narrative that was already very lacking in logic. It may be as much down to the editing as the scripting and direction, but at no point did it feel particularly clear what was going on.

I suspect that was actually intentional, as a buildup to that final twist in the story – that the footage itself had been interlaced with the Morpheus signal, and structured by Reece Shearmsith’s oddly-played Rassmussen as a thriller to keep you watching while it burned into your brain. The trouble is, a twist like that should have actually clarified the preceding events, but here it actually made them even more nonsensical. What we’d been told about the Sandmen previously didn’t make a lot of sense; we were then hit with the ‘revelation’ that it was all a lie anyway, and left with nothing at all in the way of explanation. 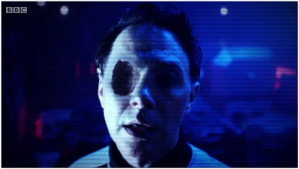 I like deliberate ambiguity in a story, as in Moffat’s Listen last year; but this just felt like Gatiss hadn’t even bothered to think through how his concept might work. Yes, the shot of Rassmussen rubbing his eye for half his face to disintegrate into dust was a memorable horror image, reminiscent of that ‘melting face’ effect at the end of Dragonfire – trouble is, in context it just didn’t make any sense. Having your central villain pop up at the end of the story to tell you how implausible the previous events were, then offering you with nothing in the way of an alternative explanation, feels like trying to have your cake and eat it.

So, despite some interesting, satirical ideas and some good performances, for me this was definitely the worst ep so far this year. Yes, The Zygon Invasion was clumsy and unsubtle, but it was at least redeemed by a passionately written and played second part that worked far better. This one has no such excuse. Gatiss has said that he intended the story to be “open-ended”, but on the basis of what we saw here, I could definitely live without a return visit from the monsters made out of snot.