“She was eating them!”

There’s a fundamental problem with prequels, which is that you know how they’re going to end. Along the way, you often have to contort your story to make it fit with the pre-existing outcomes (“have the protocol droid’s memory wiped”). Of course, knowing broadly how a story will end doesn’t mean it can’t be enjoyable – otherwise nobody would have gone to see Titanic (SPOILER – the ship sinks). The challenge is to get your audience invested in the characters living through what you already know is going to happen, and hopefully show some spectacle along the way. 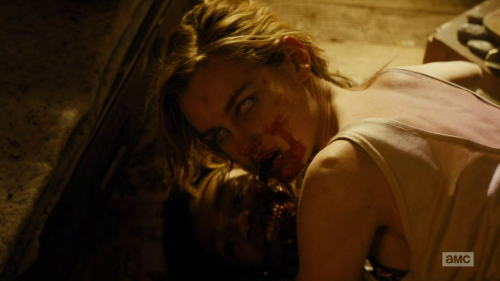 And let’s face it, the collapse of civilisation has the potential to have quite a bit of spectacle. Fear the Walking Dead, AMC’s perhaps inevitable spinoff from their ratings juggernaut, catapults the viewer to the very beginning of the zombie holocaust that Rick Grimes had the good fortune to sleep through. Where the original show plunged us straight into a world in which all the old certainties were gone, this one shows us a world (well, Los Angeles) where people still worry about the cost of plumbing and which shoes go with which jacket.

That’s necessarily less interesting, at least at first, so Robert Kirkman and Dave Erickson’s script wisely gives us a bit of zombie action right up front, as hapless junkie Nick awakes to find his girlfriend chowing down on his fellow addicts. This being the very start of things, Gloria is far from the decomposing horrors we’ve become used to; in fact she’s kind of good looking. Well, except for all the blood and the knife stuck into her.

It’s a pretty good opening, but that one zombie has to go a long way to keep you satisfied; you’ll barely see another till the extra-length episode’s end. In the mean time, the show takes a deliberately slow (some might say “boring”) pace to show a gathering sense of unease as things slowly start to slip apart. The terrific pre-credits sequence of Zach Snyder’s 2004 Dawn of the Dead remake shows a world turned to chaos literally overnight; this one, though, has six episodes to string it out over (not to mention the fifteen episodes AMC has already committed to for a second season). It will, therefore, necessarily be slower in pace, leaving you to get to know the characters you’re going to be living through this with.

That’s the real make-or-break for the show. The original Walking Dead has very strong characters (think Carol and Daryl, or the Governor), though it’s fair to say they took a season or so to grow into themselves. So I’m not (yet) going to dismiss this bunch on the basis that the two adults seem almost impossibly saintly, or that most of the rest of the characters seem to be implausibly attractive but annoying teenagers who might be more at home in a CW show.

There is a reason for that last, which is that the show’s two main characters both work at an LA high school, though the cynic in me wonders if AMC ordered Kirkman to pitch for a younger demographic. Plainly the ‘main’ character (a la Rick) is Madison Clark (Kim Dickens), a guidance counsellor with a heart of gold who’s happy to cover up for a nerdy student carrying a knife (she thinks) for protection from bullies. Madison is accompanied by her fiancé Travis (Cliff Curtis), a divorced dad who’s also an English teacher with a heart of gold, capable of engaging the surliest of students in the works of Jack London while helping his intended deal with her junkie son.

There are some other adult characters; we briefly see Travis’ ex-wife, and there’s that folksy high school principal. But most of the show’s time is spent on the teenagers, chief among them Madison’s son Nick and daughter Alicia. Nick is played as a fairly convincing junkie by Frank Dillane, son of Stephen (aka Stannis Baratheon), who pulls off a reasonable SoCal accent. He’s also pretty easy on the eye, which is presumably why he spends the exciting pre-credit sequence bare chested – shades of the CW again. His shaggy hair seems to be a continuity nightmare though, forever shifting position from shot to shot. 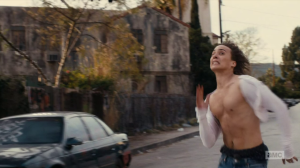 Nick is believable in the sense that, as a junkie, he’s hard to like. Presumably his overachieving sister Alicia (Alycia Debnam-Carey) is meant to balance that out. Trouble is, she comes across as a whining brat, desperate to “get out of this place as soon as I can” (I sympathise, I don’t much care for LA either). I would assume this is going to be a dramatic choice, so that the end of civilisation might make her think about things other than herself – if it doesn’t, I shall be most disappointed.

The ep spends most of its time on this soap opera, also introducing us to Alicia’s arty boyfriend Matt (who has now disappeared, so don’t expect to see him alive again) and Travis’ resentful son Chris. But in between this 90210-style stuff, Kirkman and Erickson’s script artfully works in a mounting sense of disquiet, as things start to go weird; slowly at first, but gathering momentum. A growing number of kids are off sick from the school; a huge bus turns up with only five students on it. Madison and Travis are stuck in traffic on a freeway off-ramp; not that unusual, but a grainy YouTube video shows the cause – a frenzied assailant who wouldn’t stop coming no matter how many bullets were pumped into him.

The pilot has some assured direction from Adam Davidson, making the most of the Los Angeles locations. The smog-shrouded skyline visible in so many shots contributes to a real sense of foreboding, and the ep’s climax (which took rather a long time coming) took place in those gigantic concrete storm drains that will be familiar to anyone who’s seen Terminator 2 – you’d think it would be harder than that to just drive into them, but apparently not. With the parent show so firmly set in rural Georgia, LA gives this spinoff a very different feel – it’s just a shame that every ep after this will apparently be shot in Vancouver.

Davidson throws in a couple of nice references too. Just as the original Walking Dead opens with a homage to the hospital opening of 28 Days Later (itself a homage to Day of the Triffids), the derelict church in the opening here is inescapably reminiscent of the one where Cillian Murphy first encounters the Infected in that movie. And I may be wrong, but wasn’t one of those teenage graffiti artists wearing Rick Grimes’ coat? 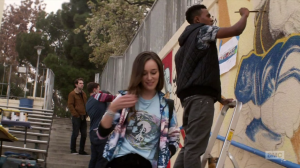 Not much as yet, unsurprisingly given the general dearth of zombies. Still, Gloria’s victim at the church looked well-chewed:

Though the prize from a limited field has to go to what remained of Nick’s undead dealer after he’d been run over by a truck. Twice. 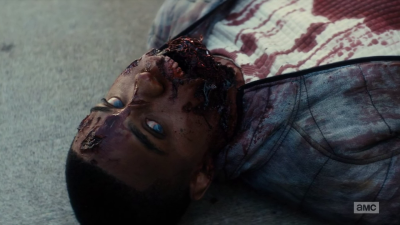 This is all done with considerable aplomb, but it’s nothing we haven’t seen before – most recently in FX’s rather more imaginative vampire apocalypse thriller The Strain, now in its second season. You’d expect a little more from a pilot hoping to grab the audience’s attention. Possibly AMC and Kirkman are hoping for a slow burn, relying on the parent show’s popularity to pull it off – if so, they probably have a point. Still, while I will undoubtedly carry on watching – and blogging – I can’t help wondering if we could do with a break from the undead right now. Z Nation is back in a couple of weeks too…