“We’re safe inside the fence. Outside, everything’s dead. Everything’s gone.” 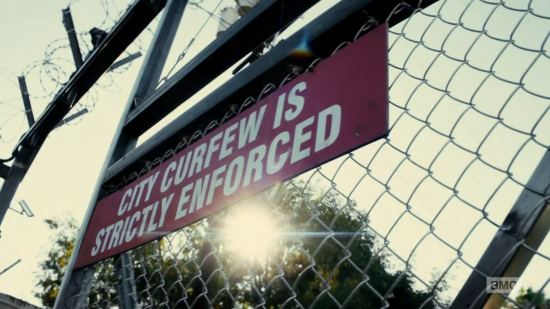 As a neophyte, fledgling series coasting on the coat tails of its phenomenally successful parent series, Fear the Walking Dead has thus far been wildly uneven in terms of tone, style and pacing. And yet episode 4 feels like the first time the show has properly realised its USP. It’s the most unsettling ep yet – despite the fact that, for the first time in the run, there wasn’t a single zombie to be seen.

“Fight the dead, fear the living” is a constant mantra of the original show, building on the central theme of George Romero’s original Dead movies that, while the hungry dead might be a pervasive threat, the real problem is the venal, selfish living. Nowhere is that better encapsulated than in the third movie of the series, Day of the Dead, in which the menace of the zombies is almost secondary to that of the deranged, power-hungry military and the unrestrained, sadistic experiments of scientists freed from any humanitarian considerations.

This fourth episode of the show, abandoning the pseudo-real time format of the previous two, went for that in spades, with the Clarks’ comfortable suburb now firmly under the outwardly genial martial law of the US military. Trouble is, in this post-Abu Ghraib world, the presence of the military is far less reassuring than it might once have been. And with the fences, the curfew, and the vague descriptions of survivors being “resettled” somewhere “in the East” this ep played heavily on that. The cavalry aren’t here; but the secret police is. 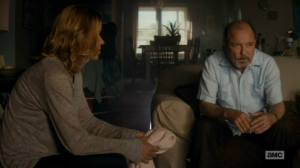 Perhaps unnecessarily, that point was hammered home by Daniel Salazar’s anecdote about the ‘disappeared’ of El Salvador under the rule of the military junta during the civil war. And yet, with Rubén Blades delivering it, the monologue carried some weight (it’s also worth noting that his father, Miguel Salazar, has the same name as one of the major characters in Day of the Dead).

So yes, the fenced off ‘safe zone’ that the Clarks’ suburb has become felt like nothing of the kind, despite the superficial normality of Travis jogging and Nick relaxing in the pool (always nice to see Frank Dillane not wearing very much). Meaghan Oppenheimer’s script cleverly built up the sense of unease from the first, with the still annoying but forthright Chris witnessing Morse Code signals from the area outside the ‘safe zone’,  in which the military had assured everyone there were no survivors.

From there, the military rule became more and more unsettling, with disappearances just like in El Salvador, and a shady doctor deciding who had to be sent to the less than reassuring hospital facility “just fifteen minutes away”. As nervy neighbour Doug was disappeared overnight, and congestive heart disease patient Hector quietly removed from the neighbourhood, the outwardly congenial Lt Moyers started to seem less like a reassuring authority figure and more like an unaccountable dictator. It can’t be a coincidence that when the protesting Travis came to object to his ‘abduction’ of Doug, he was just outside the fence playing golf – just as the Governor did in Woodbury. Also – doesn’t one of the military’s unsuspecting victims look uncannily like Carl Grimes? 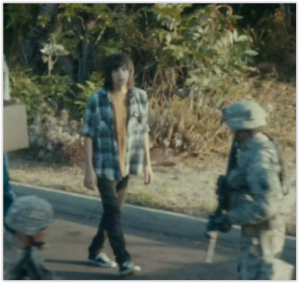 Outside of that though, we got Ofelia Salazar forming a close (as in sexual) bond with Guardsman Adams (Shawn Hatosy) which is surely going to be tested by the military’s unceremonious removal of her mother. And Alicia found Susan Tran’s suicide note, addressed to the mysteriously disappeared Patrick; Susan, unfortunately, not having realised that anyone who dies for whatever reason will come back.

Maddie’s trip outside the fence served to confirm the viewer’s worst fears. The National Guard aren’t so much there to help as to contain. Those they deem to be clear of infection are being kept ‘safe’, and the rest of the populace summarily killed. That was amply demonstrated by the nasty sequence of her discovering corpse after corpse of those apparently uninfected (though everybody is), then having to hide from a patrol plainly intent on exterminating everyone outside the zone they controlled. If any doubt was left, it was surely dispelled by the ep’s climax, when Travis finally saw the lights he’d scoffed at his son for reporting – only for them to be followed up by the harsh light and sound of machine gun fire. It may be one of the most pessimistic views of American authority I’ve ever seen, in the sense that it most closely resembled Spielberg’s vision of the clearing of the Cracow ghetto in Schindler’s List. 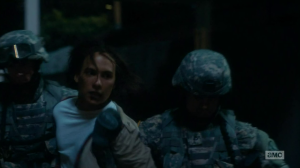 By the end, it was no surprise to see Griselda Salazar being ‘helped’ out by the military, with her husband not allowed to accompany her; while the admittedly dubious Nick, also scheduled for removal to the ‘hospital’, was dragged out restrained by plastic handcuffs. Alicia, thankfully no longer the self-obsessed LA teen we first met, grasped it instantly – her hissed advice to Nick being simply, “run”.

Yes, Fear the Walking Dead has been a slow-burning – some might say ‘boring’ – series thus far. But this ep, set nine days after the last, felt like all that lengthy set up was starting to pay off. It helps that we’re now recognisably in the middle of an apocalypse; interestingly, both the graffiti on the Safe Zone fence and that on the wall of missing people both referenced Revelation 21:4, a verse I always thought of as optimistic: “And God shall wipe away all tears from their eyes; and there shall be no more death, neither sorrow, nor crying, neither shall there be any more pain: for the former things are passed away”. 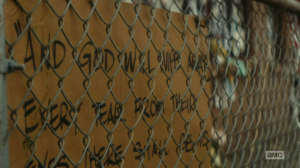 After three eps of somewhat artificially strung out tension (albeit with some very effective moments), it finally feels like Fear the Walking Dead might know where it’s going. And like its parent show, that’s a place with nothing good to say about humanity. Two more eps to go of this season (and fifteen of the already-confirmed second) and after a shaky start it’s started to become compulsive viewing. And all it took was an ep with no zombies whatsoever.

One thought on “Fear the Walking Dead: Season 1, Episode 4 – Not Fade Away”