“We know exactly what this is. We don’t shy from it. We live. We have to kill them all.”

There’s an old military maxim, coined in the 19th century, that no plan survives contact with the enemy. Switching gear from Western to war movie again, this week’s ep of The Walking Dead was a textbook demonstration of that, as we followed Rick and his meticulous planning to lead the gang to Savior HQ, with the ultimate objective of killing them all in their sleep. 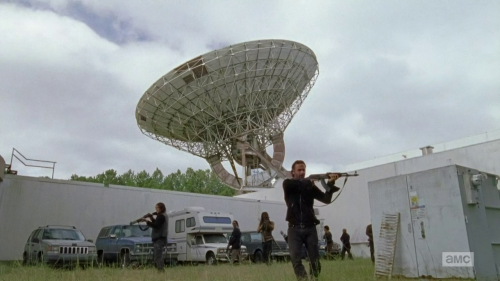 Yes, you read that right. We’ve seen the gang be pretty ruthless before – heck, we even saw Rick tear a man’s throat out with his teeth. But we’ve never seen them decide to pre-emptively murder people they’ve never been personally threatened by, let alone even met. Yes, the Saviors are not nice people; they’ve demanded Gregory’s head just to leave the Hilltop alone. But, while it’s strategically justified for survival, Rick and co are being every bit as nasty. It felt like that recurring question from last season was raising its head again – are we the baddies?

From the look on Glenn’s face as he plunged a knife into the head of his first victim, the question had occurred to him too. We’ve seen Glenn kill people before in fair fights (and even unfair ones), but he’s never had to kill someone in cold blood, helpless as they slept. It looked like it didn’t sit well with his conscience.

That big question aside, this was an exciting but fairly conventional episode. Seth Hoffman’s script eschewed the fancy narrative tricks of more inventive episodes in favour of a linear story, told very much in the style of a war movie – not that that’s a bad thing. Hence, we followed the meticulous planning of the operation, followed by its execution, in a lean script with good pacing. Character development was plenty in play early on, but gradually diminished as the action increased. Proper war movie stuff. Build up your characters into people the audience care about – then kill them.

OK, none of our heroes have actually died – yet. But they seemed to spend the early part of the episode saying the sort of things that, in a war movie, guarantee your doom. Tara promised Denise she’d come back, Maggie insisted on going along despite Carol’s opinion that it was a terrible idea to take a pregnant woman on a commando raid, Aaron swore that he couldn’t wait it out, clearly still haunted by his guilt over inadvertently revealing their location to the Wolves… The only thing missing was somebody saying that he only had two weeks of his tour and couldn’t wait to see his sweetheart again. 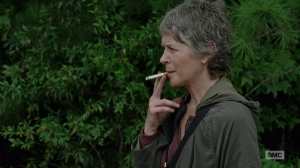 As it’s the characters that keep us coming back as much as the undead, Hoffman spent some time weaving their development into the plot. In particular, it was a very Carol-centric episode, with many of the others’ appearances framed in terms of how they related to her. Hence, her attempt to persuade Maggie not to go on the mission was as a former mother who wanted to protect a future mother. Morgan popped up, briefly, to express surprise that Carol hadn’t tattled on him to Rick about the captive Wolf and their fight. And while Carol spent the teaser playing den mother and distributing cookies, it was notable that she left one of them on little Sam’s grave. Just grief – or guilt?

Melissa McBride was superb as ever in the part. Carol’s obviously at a pretty low ebb, signified as much as anything by the fact that she’s properly taken up smoking, a habit she previously despised. It may have seemed odd for somebody to take up such an addictive habit after the fall of civilisation, when the dwindling supply of cigarettes must eventually run out. But maybe Carol’s no longer looking at the long term. After all, for a while now she’s been acting like somebody who thinks her death is imminent and inevitable. Maybe it is – I don’t know if the gang are going to get out of this without losing at least one well-loved character. Besides, even in a depression deep enough for her to start listing her own personal death toll, Carol still found time for what seemed like a burgeoning romance with Tobin – just in time to head out and risk her life again.

Also going through the wringer was Abraham, deciding to leave rather than make the hard choice between Rosita and Sasha. I suppose leaving rather than staying with either one of them might have seemed the most compassionate choice; but it also felt like a coward’s way out. And Rosita may even be developing a character of her own, as the previously hardass soldier burst into inconsolable tears. I’m not sure if Abraham’s curt dismissal of her, saying that “when we met, I thought you were the last woman in the world”, was meant to hurt her or make it easier for her to give him up. Either way, it seemed pretty harsh. And with all that on both their minds, what better time than to go on a horrendously risky raid?

Rick’s plan was, on the face of it, a pretty good one. But then, so was his equally meticulous plan for ‘Operation Get Them Somewhere Else’ in the first part of the season, and look how well that turned out. It’s actually surprising that the Alexandrians trust him to plan anything after that one. 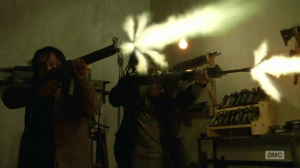 Actually it did seem to go pretty well, at first. True, there was that minor glitch when one of the Saviors sounded the alarm, and what was meant to be a stealthy assassination raid turned into a pretty exciting firefight. But even then, it seemed like our heroes won – which was when the script cleverly pulled the rug out from under them, with the revelation that they were covered by snipers and Carol and Maggie were hostages. Another great plan from Rick Grimes gangs agley…

Despite the violence of the raid on Savior HQ, most of the onscreen brutality this week was directed against the Walkers. One of them had plainly suffered a bit already, being, as he was, without any hands:

Not even being properly killed was the end of it, as Rick had to ‘modify’ a severed head to look more like Hilltop leader Gregory:

But perhaps most ominous was the Saviors’ photo collection. Face after face, obviously stove in with something rather more brutal than a mere bullet. Hints of what’s to come? 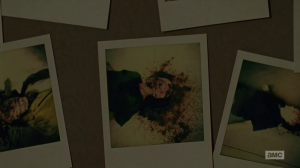 With defeat snatched from the jaws of victory for Rick and co once again, the end of this one made things look very dicey. Justified or not, Rick has essentially fired the opening shot in a war with some very nasty people – and it looks like they may have far more men than he thought. Nobody may have died this week, but next week it looks like all bets may be off for our motley crew of commandoes.

One thought on “The Walking Dead: Season 6, Episode 12 – Not Tomorrow Yet”