“The real war isn’t between squabbling Houses. It’s between the living and the dead.”

With Bryan Cogman on scripting duties again, this week’s ep of Game of Thrones had an apt but ambiguous title. Broken men of all stripes were here in spades – Theon Greyjoy, Edmure Tully, even Jaime Lannister. But to which of them was the title referring?

The answer, at least to my mind, was Sandor Clegane, aka the Hound, making a long-awaited but not entirely surprising return. The books have been dragging out the mystery of whether he survived for what seems like aeons, and to be fair it’s been a while in the show too. But I don’t think any of us ever doubted that he’d be back.

Both here and in the books, the Hound’s development from obedient killer to reluctant antihero has been one of the more interesting character arcs, and Rory McCann never disappointed at portraying that. His return this week, while played low key, was evidently so momentous that the show did something I don’t think it’s ever done before – a pre-credits teaser. And while other plotlines got as much screen time, it was clear that his return – and attempt at redemption – was the heart of the ep. 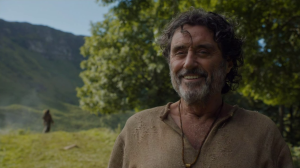 The writers clearly find the character as interesting as the fans do, and the Hound’s dwelling on his guilt and inner turmoil was the character highlight of the episode. Cogman’s script gave him a worthy role model/mirror in Ian McShane’s ex soldier turned Septon Brother Ray, who seemed (perhaps a little conveniently) tailor-made to understand what was going on in Clegane’s head.

McShane was as charismatic as ever in the part, though that hippie commune of his seemed a little optimistic given the usual standard of life in Westeros – nasty, brutish and short. It was hardly a surprise that they ended up wiped out by a group of stock brigands; only a surprise that it hadn’t happened earlier. But then we wouldn’t have got to see the Hound’s attempt to settle down into a ‘normal’ life, or how he was forced yet again into violence like a retired gunslinger in a Western. Rory McCann was as magnetic as ever, dominating the screen even when standing there saying nothing. I’ve no idea where he’ll go next, but it’s sure to be interesting. 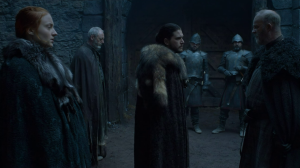 Perhaps, given his previous pairings with Sansa then Arya Stark, he’ll end up fighting for the North. This week showed us Jon and Sansa’s none-too-successful attempt to muster an army from the reluctant former Stark bannermen, with varying results. I loved Bella Ramsey’s imperious Lady Lyanna Mormont, who made quite an impression in only one scene. And I’m only surprised the show’s taken so long to get round to hiring Tim McInnerny, here to be seen as the contemptuous Lord Glover. At this point there aren’t many stalwart British character actors who haven’t been in the show.

There were more of them to be seen as Jaime Lannister rocked up to Riverrun, on the fool’s errand the High Sparrow had persuaded the King to send him on. I almost cheered to see Bronn again, his pithy humour a highlight as ever, along with the previously barely seen Brynden “Blackfish” Tully, incarnated by the legend that is Clive Russell. Both Jaime and the Blackfish seem to be a match for each other, unlike the Freys and their pathetic bluff in threatening Edmure’s life. Another antihero in a show full of them, Jaime still has tarnished sense of honour; if it weren’t for his unswerving devotion to his conniving sister, he’d probably be fighting on the side of right, along with the Blackfish and Jon Snow’s army.

Cersei, for her part, was still stewing over her failed attempt to depose the High Sparrow, who this week had set his heretic-torturing sights on the formidable Olenna Tyrell. That made sense, since she is plainly a more dangerous adversary than anyone else in King’s Landing. It was a shame that Jonathan Pryce and Diana Rigg didn’t actually get a scene together, but each got some good material with Natalie Dormer’s Margaery, whose loyalties are still uncertain. I would have preferred a little more ambiguity to her scene with Olenna; both Dormer and Rigg had perfectly successfully conveyed that Margaery was still loyal to her family, in a nicely subtle way so that the Scary Septa didn’t pick up on it. I don’t think we needed the little note with the Tyrell rose on it to underline the point.

With all that going on, the script wisely kept the other plotlines largely absent; but we did get a couple of significant snippets from over in Essos. It was no surprise to find Arya Stark cornered by the vengeful Waif – I wasn’t fooled for a minute by that old lady disguise. Still, despite a lot of stabbing and apparently having to hold in her own intestines, I don’t think we need to be too worried about Arya, whose survival skills are rarely in doubt. The suspense her is not whether she’ll survive her wounds so much as how. 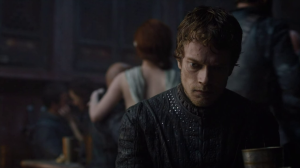 Also in Essos was another broken man – Theon Greyjoy, whose sister had rather cruelly decided to rub salt in the wound (as it were) of his unfortunate mutilation with a trip to the standard Game of Thrones Brothel TM. This seems to be Yara’s idea of therapy; they’re a tough lot, those Ironborn. Still, it seemed to work – at least Theon’s got his drinking head back on. How useful that’ll make him remains to be seen.

Something of a return to form on both counts for the show this week. The Volantis brothel was rife with that notorious Game of Thrones trope, naked and semi-naked female extras being used as set dressing. It did at least serve a plot point, to underline how uncomfortable Theon was in this setting:

And while much of the violence (such as the slaughter of the hippie commune) happened offscreen, that was again a nastily realistic close shot of the hanged corpse of Brother Ray. This show does hanging almost too well:

The High Sparrow, with the true fanatic’s outlook on sex as duty rather than pleasure: “Congress does not require desire on the woman’s part. Only patience.”

The ever-romantic Yara Greyjoy, a true sailor to the core: “Since it’s my last night ashore for a while, I’m going to fuck the tits off this one.”

And of course, Sandor Clegane, lost in the torment of his conscience: “If the gods are real, why haven’t they punished me?”

Despite being something of a filler episode after the tumultuous events of recent weeks, this nevertheless stood out for some sterling character work, particularly in the return of Sandor Clegane. Praise too must go to the always-watchable Ian McShane; he was so good I was rather disappointed that he only got one episode. While not much actually happened, plotwise, there was still plenty of scheming and manoeuvring going on, and it was never less than entertaining. And to be honest, the show pretty much had to slow down a bit after the high octane first half of the season. Don’t think of it as a lull; more as a breather.

One thought on “Game of Thrones: Season 6, Episode 7 – The Broken Man”