“All of us have to believe we’re decent, don’t we, to get to sleep at night? Tell me, how do you believe you’re decent, after everything you’ve done?”

Blimey, it’s fair rushed by, this season of Game of Thrones, hasn’t it? So much going on, so quickly, it’s hard to believe there’s only two more episodes left of this season. Yet again, there was loads going on this week, but what struck me most about this ep was the character work. Momentous decisions were made, dramatic plots redirected – and all because of who these people are. Benioff and Weiss, back on scripting duties this week, gave us an ep that plumbed the depths of all the characters, even those we didn’t actually see – and those characters may decide the fate not just of the Seven Kingdoms, but of all of humanity.

Again, there was a whole hell of a lot going on this week, but for me the ep’s heart was in three, character-based scenes. The first was that almost Preacher-like scene of Tyrion persuading Grey Worm and Missandei to lighten up and have a drink. The second was the bitter Sandor Clegane meeting up with the long-absent Beric Dondarrion and Thoros of Myr. But the third – and best – was a midnight chat between Jaime Lannister and the previously uninteresting Edmure Tully.

Jaime’s always been one of the show’s most interesting characters, a knight with a sense of honour that still remains, however tarnished, but haunted by the memory of the oath he broke to save the people by killing his king. Nikolaj Coster-Waldau has brought that memorably to life throughout, but it’s fair to say the character has been drifting somewhat of late. That lengthy dialogue scene with Edmure felt like a restatement of the character’s principles. He’s not really all that bad a guy; but what matters most to him is his sister/lover (never has incest seemed so sympathetic), and the genuine welfare of the people of Westeros.

That was a great scene, with Edmure suddenly gaining more of a personality than he’s had in three seasons (most of which he’s been absent for anyway). Tobias Menzies, who’s always typecast as sleazeballs, managed to give Catelyn Stark’s brother more of a character than “spineless wanker”; to the extent that his ultimate, apparent betrayal of his family, surrendering Riverrun, felt like a reasoned decision. 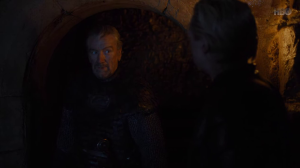 How much of one remains to be seen, but it was plain that Jaime had talked him round to, at the very least, trying to prevent bloodshed – something both he and Brienne had failed to persuade the Blackfish was a good idea. Reports of his death, I suspect, were greatly exaggerated; you don’t let a character as charismatic as that just die offscreen. I’ve a feeling we’ll be seeing Clive Russell again – hopefully.

But I do wonder whether Edmure – and perhaps Jaime – will do what the Blackfish wouldn’t and lend the now-supine Tully army (such as it is) to Sansa Stark. The shadow of Sansa fell heavily over the ep, even though she didn’t appear, and with good reason. Both Jaime and Brienne swore oaths to the late (?) Catelyn Stark to protect her daughter, and I doubt either has forgotten. Certainly that forlorn wave from Jaime to the departing Brienne and Pod suggested the two are still very much bonded, and that was the oath that bonded them in the first place.

Though it’s also fair to say (as Jaime did) that he’s impatient to get back to his sister’s aid. The other character casting a long shadow over the ep despite his absence was the High Sparrow, courtesy of his useful idiot King Tommen, who chose this week to declare that the trials of Cersei and Loras would not be conducted by combat but by a tribunal of seven septons, “as in the days of old”. Yes, because a jury of religious fanatics is a sure guarantee of justice being done. But Cersei, as ever, plainly has something up her sleeve. Just what is this mysterious rumour she and Maester Qyburn were alluding to?

Doubtless we’ll find out soon, as King’s Landing’s own Spanish Inquisition is a plotline that is getting rather stale in its lack of movement. Over in the Riverlands, though, an old plotline got kickstarted back into action with the unexpected reappearance of the Brotherhood Without Banners, in the shape of Lord Beric Dondarrion and drunken Red Priest Thoros of Myr.

It was undoubtedly brilliant to see Paul Kaye back as the dissolute priest suddenly finding himself serving a real deity, but their meeting with the disillusioned Sandor Clegane was undoubtedly a moment of some import. Alone among those this far south, they seem to be the only ones with an inkling of the real threat facing the Seven Kingdoms – that undead army Up North, commanded by unstoppable creatures of supernatural evil.

Sandor Clegane, though, is nothing if not an ordinary bloke, and his dismissal of this epic prophecy chimed perfectly with is established character. He knows that ordinary people, caught up in epic storylines, are the first ones to die; in that sense, he’s one of the most agreeable characters here. Rory McCann was as brilliant as usual, all curt disdain of lords and religious fanatics exhorting him to Join the Cause for the Good of All. He’s been there, and done that – “I tried joining. Didn’t work out for me”. I’ve a feeling though that, Han Solo-like, he’ll come through when it really matters. 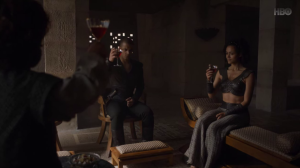 Tyrion Lannister, who is by no means an ordinary bloke, was this week brought face to face with the failure of his political scheming, as the Masters returned to Meereen with a vengeance (and a fleet full of ships with fiery siege engines). While we all love Tyrion, it’s sometimes nice to see this all-knowing smartarse brought down a peg or two; and his misjudgement of Essos politics was a great example.

Leave it to Dany Targaryen to unexpectedly turn up and save the day (I hope we get some explanation of her sudden reappearance next week). I’ll admit though, I thought the Masters’ fleet would be seen off by the arriving Ironborn – and I think it’s rather a shame that didn’t happen. Still, Dany’s sudden arrival was a definite punch the air moment, though to be fair we still don’t have a clue how she’ll solve the situation. Those dragons will probably be helpful though.

The final character whose destiny was redrawn this week got surprisingly little screen time, considering the title of the episode. Yes, to no one’s surprise, Arya not only turned out OK (with a little help from Lady Crane) but also saw off her sadistic nemesis the Waif after an enthralling chase sequence. The masterstroke was to have that final fight take place in darkness and offscreen, only to be revealed when the startled Jaqen found a new Face in his cellar.

As a result, it looks like (surprisingly) she might have escaped the ire of the Faceless Men (who if I’m honest now seem to consist of just Jaqen himself) by dint purely of earning his respect. Mind you though, I thought this cult of assassins made a virtue of never making their tasks personal. In that, surely the Waif failed every bit as much as Arya, with a genuine grudge against the newcomer. Still, I shall miss Faye Marsay in the part – she was almost as hissable a villain as Ramsay Bolton.

Well, no sex this week – when would anyone have found the time? Plenty of violence though, and not unexpectedly much of it was at the hands of the Clegane brothers. Ser Gregor, aka The Mountain, made perhaps unnecessary mincemeat of the overly demanding Faith Militant – which surprisingly didn’t get Cersei into even more trouble: 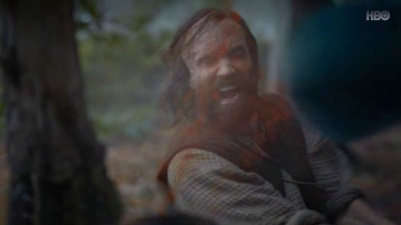 And I’m not sure exactly what the Waif did, but Lady Crane’s demise did not look comfortable:

Still, Arya made up for it with her removal of the Waif’s face: 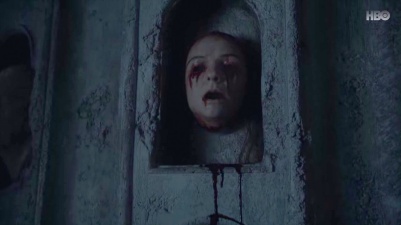 Sandor Clegane, perfectly summing up what happens when ordinary people get caught up in such momentous events: “Lots of horrible shit gets done in this world for something larger than ourselves.”

Bronn, disappointed at Podrick’s lack of ‘action’: “Come on, you’re the one with the magic cock!”

Jaime, discussing the women in his life with Edmure: “Catelyn and Cersei, they’d do anything for their babies. Start a war, burn a city to ash – free their enemies.”

And finally Sandor again, confronting a less than threatening archer with his memories of the estimable Arya Stark: “Drop that arrow, you bloody girl. Tougher girls than you have tried to kill me.”

Hard to believe, but there’s only two more eps left of this fast-paced season, which seems to have gained a new lease of life from outlasting the books it’s based on. Many questions remain unanswered, and if rumours are true there are only two more (shorter) seasons in which to answer them. But once again, this week had the feel of moving pieces into place for an endgame – while never neglecting that character detail and excellent dialogue that makes this show such a joy to watch even when not much is actually going on.