“Clock’s ticking, Rick. Think about what could still happen.”

All summer long, the question on every Walking Dead fan’s mind has been – who died? Having read the comic was no comfort – the TV version has deliberately misled comics readers before. This intense, emotionally gruelling season opener, scripted by showrunner Scott Gimple and directed by veteran Greg Nicotero, showed no mercy to those waiting for an answer. Every possible drop of tension was milked in a clever, non-linear narrative that set out to achieve two things – firstly, to keep us from knowing for as long as possible who was on the receiving end of Negan’s beloved baseball bat, and secondly, to break Rick more thoroughly than we imagined possible. 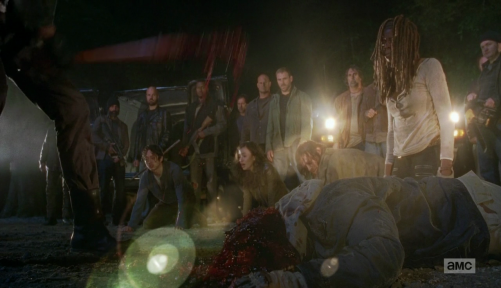 As to the first, I’ve read a few comments to the effect that eking out the revelation until about halfway through the ep was “condescending and arrogant”. Yet surely building tension is exactly what an episodic narrative should do? For me, I don’t think I’ve ever focused so intently on an episode of this show, which is surely some credit to the intention of its makers. From the post-death cold open, shot entirely in tight close up between Andrew Lincoln and the magnetic Jeffrey Dean Morgan as Negan, this was an ep that demanded your attention – and got it.

I did find myself holding my breath more than once, feeling that all bets were off – after all, characters in this show have even less job security than those in Game of Thrones. So it proved here, as two major cast members came back for this season opener only to get brutally killed about twenty minutes into it.

Gotta say, it was cleverly done. Comics readers, knowing the fate of Glenn, may have been lulled into a false sense of security when Abraham (long dead in the comics) was the recipient of Lucille’s loving attentions. But it was a brilliant bait-and-switch from Gimple and Nicotero to then have Negan off Glenn too, and in every bit as traumatic a way as in the comics. Which served a good dramatic purpose – by the time the sobbing Rick was begging Negan not to make him cut off the stoic Carl’s arm, you really believed it might happen. I was certainly holding my breath at that point. 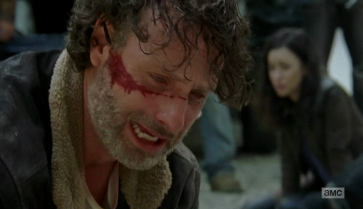 Major plot points aside though, this was an extremely tense, well done ep for something that, let’s face it, was 45 minutes of a bunch of people in a clearing (RV excursion notwithstanding). It had the advantage that all the viewers were waiting with bated breath to find out who died, and played that to the max with the eking out of tension. But more than that, it still paid attention to the characters and their development with the plot.

So, it was goodbye to Abraham, with a characteristically bizarre, AMC-friendly cuss – “suck my nuts”. I will miss Michael Cudlitz in the part, and he’s been great, but the show never got any further than the comics in dealing with the fact that, once Eugene’s Big Lie was revealed, the character really had nowhere to go. Yes, it may have been a bit cheap to use him just to put us off the scent of Glenn’s fate, but let’s face it – what else were they going to do with him? It’s a tribute to the character that at least his death was considered to be more devastating and meaningful than, say, Rosita or Aaron.

But finally – Glenn. Yes, comics readers knew this was where he bought it, although plenty of us were hoping the show would do its frequent thing of swerving in a different plot direction. But no, Glenn’s gone, finally after – let’s face it –  any number of scenarios where he should have died already. Some of them without even any explanation as to how he got out of them.

It’s a devastating moment in the comic, and deservedly so. With the show not having lost a major character for ages, it actually would have felt like a cheat for them to shy away from it. But it’s a tribute to how likeable Steven Yeun has been in the part for the last seven years that it still felt like a wrench. As Negan said, “it’s good to have a right hand man. Who’s yours? Unless I just… oh”.

Which brings me to Jeffrey Dean Morgan, a man who can chew the scenery even while making you utterly despise the character he’s playing. Along with Jackie Earle Haley as Rorschach, Morgan’s turn as the Comedian in Zach Snyder’s so-so adaptation of Watchmen was one of the movie’s highlights. He worked the same trick here, making Negan sort of likeable even though Rick (and, presumably, the viewer) would rather have him killed. In the comics, Negan’s the most interesting villain since the Governor, and arguably far more terrifying – he’s brutal, psychopathic, yet highly intelligent. Like Hannibal Lecter without the civility.

Clearly he’d thought this out – the whole thing was an exercise in breaking Rick to his will. And it worked, or seemed to – as it does in the comics. Andrew Lincoln did his usual sterling job, faced with the challenge of showing this man, who’s become almost feral in his defence of his own people over the years, seemingly yielding to a foe he has no hope of beating. As in the comics, it’s a new twist from the usual gung-ho “they’re fucking with the wrong people” approach. That’s’ much needed – at this point, if there’s to be any jeopardy in the show at all, Rick has to be shown to be beatable. By the end of this, you thoroughly believed it.

Honourable mention should probably go to the hapless hanging Walker that Rick used as a temporary safe haven, whose neck wasn’t as durable as he might have hoped:

Though the obvious runner up was the sad fate of Abraham:

And the obvious winner the wince-making, horrifying death of the ever-likeable Glenn, matching perfectly the events in the comic:

So ok – I get the objections from those who found the stringing out of the tension contrived and annoying. It’s a matter of taste. For me, this was a masterclass in how to play with viewer expectations in a long-running narrative drama, and as deservedly devastating as the equivalent scene in the comic. It wouldn’t work if the show hadn’t built up a viewer rapport with those characters.

And more than that- it’s restored a real sense of jeopardy to a show that was becoming in danger of elevating its lead character to an infallible superhero (albeit one of dubious morality). This restores some suspense to the show, but also allows us, for probably the first time in several years, to unambiguously consider the regulars as “the heroes”. Bolstered by Jeffrey Dean Morgan’s reliably awesome performance, I can’t wait to see where this series goes next. 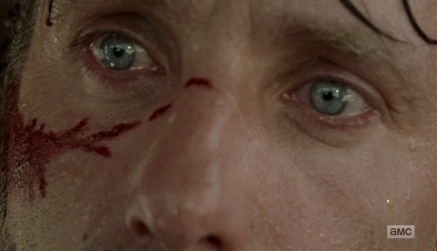