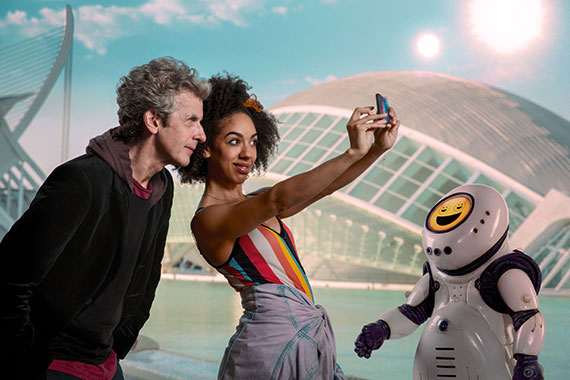 “They want to help you. Killing you is just a side effect.”

A couple of years ago, acclaimed writer Frank Cottrell Boyce penned his first script for Doctor Who, In the Forest of the Night.

Not because it wasn’t interesting, or imaginative; it was both. But what it wasn’t was a Doctor Who story. As a deconstruction of classic fairy tales, it would have stood a far better chance as a story unencumbered by the rules of the Doctor Who universe (such as they are), and the stranglehold of the Doctor/Clara/Danny angst fest that dominated that season. 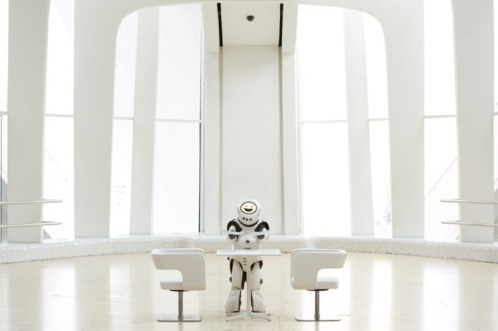 Perhaps Boyce realised all this, because his second script, this week’s Smile, is very much a Doctor Who story. So much so in fact that it seems informed by / ripped off from quite a variety of previous ones. The overall concept established in the teaser – stay happy or you die – is obviously from 1988’s The Happiness Patrol. The robots sent in advance to prepare for the arrival of human colonists are basically the Mechanoids from 1965’s The Chase, the pristine city that effectively ‘rejects’ its own creators would be the City of the Exxilons from 1974’s Death to the Daleks. And the cryogenically frozen last remnants of humanity were straight out of 1974’s The Ark in Space, even to the extent of one bearing the rank of ‘Medtech’.

That deliberate callback to The Ark in Space, along with the Doctor’s casual remark that he’d bumped into a few such colonies before, neatly tied the ep’s influences together while avoiding – just – potential accusations that this was more a ripoff than a homage. Tellingly, it also negated the very concept of Boyce’s previous story – if the evacuation of Earth was the same one as in Ark, ie because of massive solar flares, seems like no instant trees stepped in to protect Earth this time round. 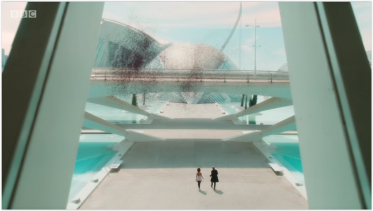 All that aside, this time round Boyce gave us what felt like a very trad Who story – Doctor takes new companion on a trip to the far future, gets embroiled in a pre-existing mystery, investigates and, as the tension mounts, ultimately saves the day, but only because said companion helps him realise when he’s got it wrong. If that sounds familiar, it should – it’s the basic plot outline of the early Eccleston/Piper stories. Like that era, it seems the new companion’s second trip, after the far future, will be Earth’s past. It’s all just a little bit like history repeating – presumably intentionally on Steven Moffat’s part.

Trad Who story it may have been, but in that regard I thought Smile worked rather well, particularly in showcasing the newly established chemistry between Capaldi’s Doctor and new companion Bill. As I said last week, Bill’s ordinariness is a refreshing change from ‘Impossible’ Girls ‘Who Wait’. 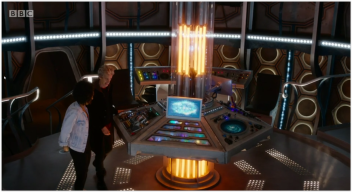 That carried on this week, with Pearl Mackie delivering some killer lines that punctured the Doctor’s dramatic pomposity while addressing the sort of questions usually only asked by the most pedantic of fans on Gallifrey Base. Yes – why doesn’t the Doctor move the seats nearer to the console so you can sit down while flying the TARDIS? That said, while it was amusing to have references to the TARDIS toilets last week, Bill’s query about using biologically implanted comms systems while “on the loo” seems like it might be the beginning of some kind of fixation with human excretory systems on the showrunner’s part…

As with Rose Tyler in so many Eccleston episodes, it was Bill who had the inkling that the Doctor might be going about all this wrong, expressing her doubt throughout; “you can just blow things up without getting in trouble?” However, while I’d be the first to say I loved the Ninth Doctor, I’m glad that, with a bit of steering, the Twelfth didn’t actually abdicate the solution totally to his friends. 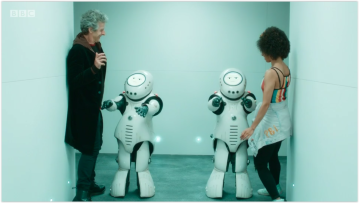 Boyce’s script, unlike his previous one, was well-paced and added the plot elements one by one in a largely satisfying way. I know the ‘emojibots’ were greeted with groans from many sections of fandom as yet another ‘cute robot’, but they weren’t that bad as a misunderstood (and misunderstanding) menace, along with the microbotic Vardy. They were, in essence, just trying to do the job they were programmed to do (keep the community happy) as best they could, adapting to try and become more efficient.

All well and good, and a perfectly acceptable interpretation of a classic sci-fi trope; trouble is, it was actually the same concept as the plot last week. And I complained (good-naturedly) about it being unoriginal then. Now, I don’t think this is necessarily the fault of Frank Cottrell Boyce, but I do think the showrunner, or the script editor perhaps, should have noticed this and at the very least suggested changing the order of the eps so as not to have two successive stories with the same basic solution. 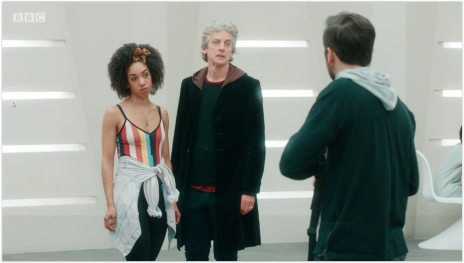 It was, however, a nice variation that the Doctor’s ‘reset’ (“you turned it off and on again?”) revealed that the robots had become self-aware, effectively a new life form every bit as deserving of its place on this new world as the human colonists. Again, not a new concept; but certainly a more optimistic take than the apparently homicidal Mechanoids.

Lawrence Gough, on directing duties for the second ep in a row, was again a great asset. Visually, this was a handsome episode, Gough making the most of the weird angles and gleaming white of the deserted colony city. Some of the shots of the emojibots gathered at the window showed an impressive eye for symmetry; and that I couldn’t work out how much was location and how much CG showed some impressive work from the effects team. 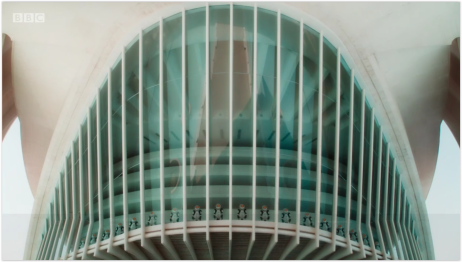 The grubby interior of the original colony ship (amusingly named the ‘Erewhon’ – read it backwards) was a perfect contrast to the pristine city; though it did seem a little too much like the interior of a chemical plant rather than a futuristic space vessel. Fair’s fair though, the recent Star Trek movies do much the same with the Enterprise engine room.

As with last week, references to this year’s story arc were kept thankfully slight. There was a brief reference to the Doctor’s ‘oath’ in a brief appearance from Matt Smith’s Nardole (who presumably won’t feature at all next week), while the Doctor himself referred vaguely to “a thing that happened” which gave him responsibility for the mysterious Vault. 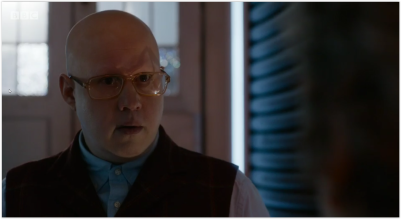 The unusual (but reminiscent of the old Hartnell stories) inclusion of a lead in to next week’s ep seems to suggest that the Doctor and Bill will take longer getting back for that cup of tea than he initially thought. I’m assuming that this may be the format of much of the season, just as in the 60s – the Doctor can’t steer the TARDIS as well as he thought, and a lot of time will be spent landing in the wrong places while trying to get back to the Vault. I have no problem with that, as it (hopefully) means the arc will be kept on the back burner until the end of the season, rather than shoehorned into every episode.

For now though, Smile was a fairly average, even derivative episode salvaged somewhat by some excellent direction, some nice dialogue and the usual excellent performances. I’m heartened that, unlike last time, Frank Cottrell Boyce has given us a script that feels like it belongs in Doctor Who; next time though, he might want to try relying rather less on its past.