This truncated season of Game of Thrones has often seemed to move at a breakneck pace, sacrificing the nuance and complexity of earlier seasons in favour of tying up the multiplicity of plotlines as fast as possible. This has led to a lot of tick-box exercises in plotting, as with last week; it’s also led to a lot of artistic licence to keep things rattling along, particularly in terms of distances. Many people have been pondering how, last week, Gendry ran all the way back to Winterfell, a raven was dispatched to Dragonstone, reached it, and Dany’s rescue party arrived in what could only have been a few hours. 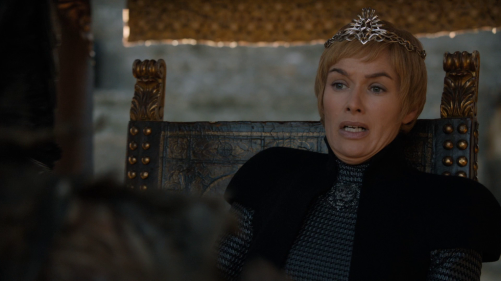 I can live with those kinds of liberties, but when events happen just to make a necessary plot point, things can get annoyingly predictable, something the show has rarely been in its past. This week’s season finale had a lot of that, but it’s fair to say there were a couple of surprises sprung along the way. And refreshingly, it relied on character and scheming rather than spectacle to hold the attention; though plainly the machinations of those involved are just the leadup to more spectacle next year.

The lion’s share of the action was at King’s Landing. It’s a measure of how many plotlines have now converged that the vast majority of surviving major characters were all there together, as they all pitched up the Westerosi equivalent of the Yalta conference (though given Cersei’s involvement, it was Yalta if they’d invited Hitler along too).

As a result, we saw many larger than life characters meet for the first time (Cersei and Daenerys, Cersei and Jon), and many long-separated duos reunited (the Hound and the Mountain, Bronn and Tyrion, the Hound and Brienne, etc, etc…) As you’d expect with such an array of flamboyant characters, the sparks fairly flew dramatically. Rushed this season may have been, but this longest ep of the year gave the drama plenty of time to breathe, and the characters plenty of time to spit fire at each other (or, in the case of Bronn and Pod, go for a pint).

Yet for all the fun of seeing these characters interact, there wasn’t much in the way of surprise here. Let’s face it, did anyone really expect Cersei to ally herself with the rest of them, even if she was confronted by the reality of the risen dead? And it wasn’t especially convincing of Euron Greyjoy to turn tail and run quite so easily, was it? 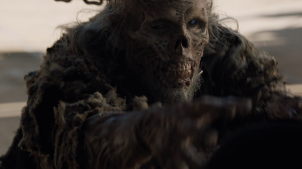 Partly, that was due to the fact that, in the glorious sunshine of King’s Landing, the growling zombie the Hound brought in his suitcase seemed somehow less terrifying than they had in the grey-skied wastes beyond the Wall. It might also have had something to do with our over-familiarity with the creatures, both from this show and the horde of zombie-based shows currently infesting the screens. Whichever, it wasn’t much of a surprise that Cersei wasn’t overawed enough to put aside her politics in the face of the threat. Nor that she saw it as an opportunity to get rid of her enemies by pitting them against each other.

And yet, while some of the events were less than surprising, some of the drama was enthralling. There’s rarely been a tenser scene than Tyrion’s long-awaited reunion with his hated sister; Peter Dinklage and Lena Headey played it with enough venom that I’m sure I was holding my breath for most of the scene. And at Dragonstone, Theon’s (metaphorical) regaining of his balls was by turns touching (the scene with Jon) and triumphant (the look on Alfie Allen’s face as his opponent tried to fell him by kneeing him in his non-existent balls).

Perhaps the ep’s only surprises came at Winterfell. Actually, to clarify that, they weren’t especially surprising except in that they happened so soon. Let’s face it, we knew that at some point, the matter of Jon’s parentage would become wider knowledge. But it did feel a little contrived that Sam Tarly should suddenly show up at Winterfell to help Jon, just in time to fill in the gaps in Bran’s historical visions (though really, why didn’t the Three-Eyed Raven see these events already?).

More satisfying was the final comeuppance of Petyr Baelish. Again, I’d expected this to happen at some point, but the clever bait and switch at what appeared to be Arya’s trial took me very much by surprise. It was also deliciously satisfying to see the look on Littlefinger’s face as he realised what was going on, and particularly as Sansa repeated his own words back to him – this time with him as the target.

It was one of the shorter trials we’ve seen, even in this show; but then Westeros never seems to have been big on due process. But again, it was satisfying to see a proper reconciliation between the Stark sisters on the castle’s chilly battlements. It also looks like, as a result, the North now has direct control over the Vale, surely a massive advantage in any battles to come.

If you were missing the usual sturm und drang of actual armed conflict, the ep did at least end on the obligatory cliffhanger as the Army of the Dead finally reached the Wall – given the pace they move at, it’s no surprise it’s taken them seven years to get there. Mind you, I did wonder what the Night King had planned to do about the big icy obstacle if he hadn’t been lucky enough to have an undead dragon drop into his lap.

But you can’t deny that it was satisfying seeing the Wall not just breached but pretty much demolished, at least at this end of it. I wasn’t entirely surprised that the zombie dragon still breathed fire, albeit blue; how else could it have brought down the centuries of ice making up the Wall? It must presumably still be hot fire though, so surely it could be problematic for the cold-loving White Walkers? Ah well, perhaps best not to ask questions like that… 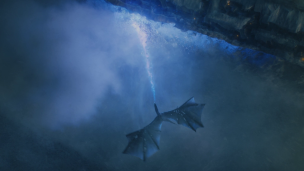 I may moan about Jon Snow’s frequent teenage-style surliness, but my goodness Kit Harington has a nice bottom:

I hope he doesn’t feel too objectified.

Not much on the violence front, unsurprisingly for an episode where most of the conflict was verbal. Theon may have been beaten bloody, but he did at least give as good as he got:

And it may not have been the goriest thing the show’s ever done, but it was tremendously satisfying to see Petyr Baelish get his throat cut:

So – one more season to go. The Dornish and the Tyrells are out of the fray, and the Lannisters more or less alone (unless Cersei sees sense and allies with everyone else, which is to say the least unlikely). It looks like Jon Snow (aka Aegon Targaryen) is now the likeliest contender for the Iron Throne – I wonder what his aunt/lover will make of that? Jaime’s finally given up on his sister, and is heading North with the news that Cersei’s not going to help after all. And the first snows are falling on King’s Landing…

The plot may be moving at a breakneck pace, but nothing here was entirely unexpected, and while this season has been satisfying, it’s lacked the shocks of previous years. Benioff and Weiss are clearly running out of major characters to off, as we lost fairly few this year – Littlefinger was probably the most prominent, though I will miss Thoros.

The finale itself was rather a mixed bag. The extended run time allowed for some lengthy and impressive character scenes, but overall the plot didn’t go anywhere you probably hadn’t worked out sever al years ago. There’s undoubtedly a satisfaction in seeing the events come to pass; but it’s a little disappointing that the show no longer seems to have the power to surprise and shock.