“I know who you are. I saw it in the mirror through the open door. And it wasn’t any kind of blast from the past. I guess we’re not the same guys we used to be, huh? Cause you’re a monster.”

This week on The Walking Dead, it was… more of the same. Lots of gunfire, some angsting over moral dilemmas, a fair chunk of crowd-pleasing gore, and… that’s about it. You can probably guess the measure of my enthusiasm for this episode by the fact it’s taken me over a week to be bothered writing about it.

As so often recently, that doesn’t mean it was bad. On the contrary, this was a perfectly competent script that balanced the show’s various elements fairly well. It’s just that, well, we’d seen all this before. Not least last week, which this ep felt like a virtual retread of. As before, there were masses of those oddly plentiful bullets in the air – as mentioned by various people, weren’t they supposed to be in such short supply that Eugene’s manufacturing skills were highly sought after?

And as before, there was much of the show’s trademark arguing about the virtues of civilisation versus the practicalities of survival. This carried on last week’s disagreement between Jesus, Morgan and Tara, though it did at least amp it up to actual fisticuffs. Yes, the fight between Jesus and Morgan was pretty cool, and probably long overdue; but it didn’t tell us much that was new about either character. We know Jesus is a badass who looks cool kicking butt in his long leather coat; we know Morgan’s been conflicted over his ideals since taking the decision to start killing. Since the fight ended up as, technically, a draw, it didn’t feel like anything was resolved – there might at least have been some drama if either had actually killed the other.

The other ideological conflict was between Rick and Daryl, egged on by the brief and ultimately pointless return of Morales. I suppose the dramatic point of including a character from way back in season one was to underline just how much Rick has changed, and to make him see it too.

But I’ve never had the impression it was something he was in denial about – he’s been gurning with ideological conflict for years now. It didn’t entirely convince that he would so quickly return to the “Officer Friendly” persona sneeringly referred to by his old acquaintance. Daryl’s far more pragmatic approach of just shooting Morales was much more in character, but made you wonder why they’d bothered bringing him back in the first place. 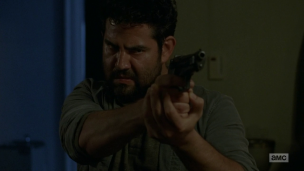 Ezekiel and Carol’s band at least got the lion’s share of the action, with some nice cross-cutting between his inspirational speeches and the surprisingly successful results. Even here though, it was obvious to anyone who’s ever seen a war movie that this run of good luck was going to run out in a fairly severe way. So it proved at the cliffhanger, but the turn of events felt so predictable it was hard to wring much drama out of it.

Nor was there much drama in the entirely unsurprising death of Eric, as heavily telegraphed last week. Yes, Aaron’s a nice guy, and it’s a shame his boyfriend’s dead (or undead, at any rate). But as I said last week, Eric was never given any kind of character beyond “Aaron’s boyfriend”, making it hard to care much about him either way. If he’s the only major(ish) character the writers can bring themselves to off, the show’s definitely losing its mojo. Last season might have descended into repetitive formula, but don’t forget it opened with the bravura step of killing off Glenn (however expected that might have been to comics readers) and Abraham, which was a genuine surprise. Eric doesn’t really rate on the same level as those two. And don’t even get me started on the whole “Gregory is a douchebag” comic relief subplot…

There was at least plenty of this, with more Walker chewing than we’ve seen of late. It was particularly notable during the attack on Jesus’ ill-advised prisoner convoy, with some nicely rotted Walkers tumbling down the hillside to attack while their victims and their captors stupidly stood there and waited:

Which at least meant that the undead got some square meals inside them for the first time in who knows how many episodes:

I must say, after last season’s repetitive second half, the opening of this season hasn’t done much yet to redeem the show in my eyes. Who would have guessed they could adapt a comic storyline entitled All Out War into something so uninteresting? Yes, the moral debates had some potential, but we’ve been there before and with much better effect. And calling the ep Monsters was hardly the subtlest of allusions to the issue.

I’m still hoping the show can regain the heights of seasons 3-5, but just now it feels like it would actually be preferable to be stuck back on Hershel’s farm again – at least the drama was fresh then. Right now it feels as decomposed as the Walkers.