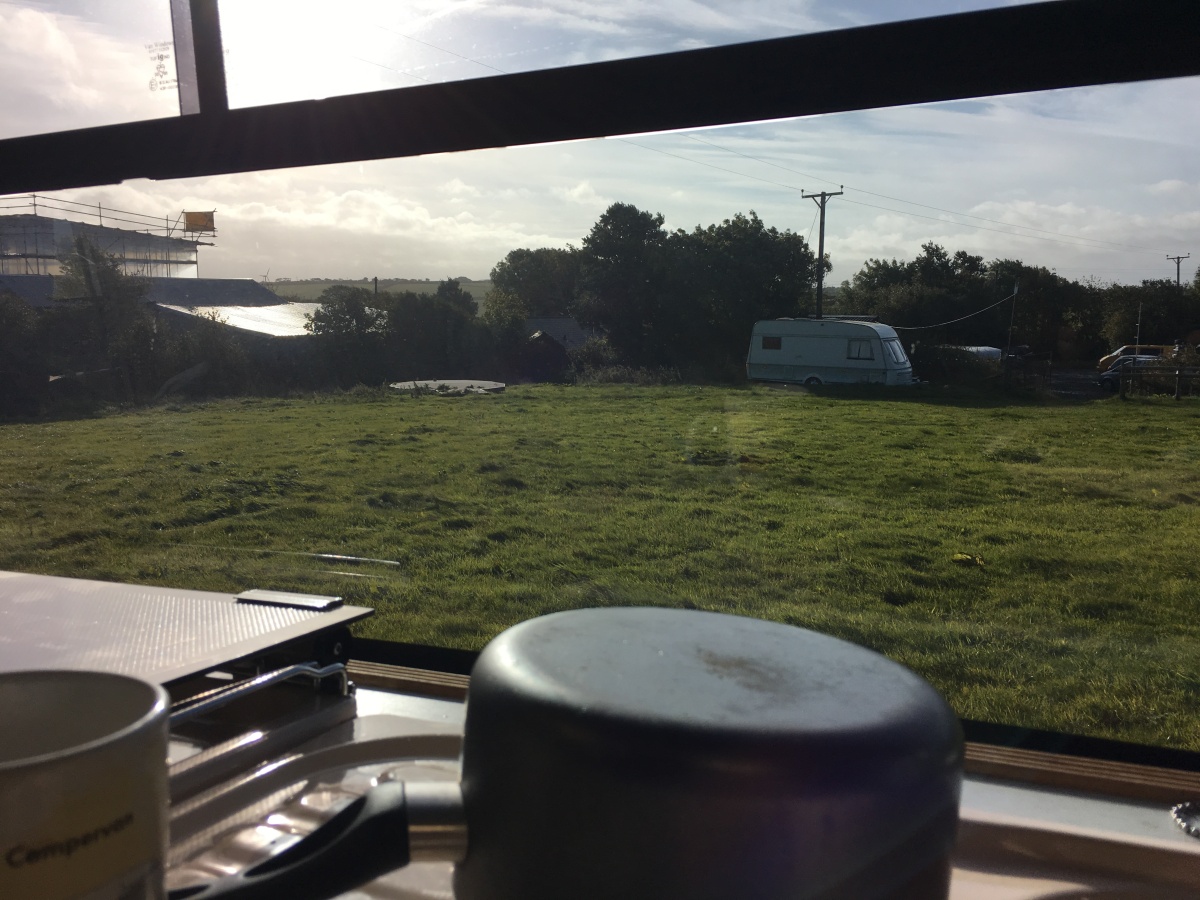 My last day at Trelay, and that means I need to fix that floppy TV aerial so it at least doesn’t cover up the rear number plate. Borrowing a handy ladder (the place is full of them), Tom watches in the role of Health & Safety as I climb to the roof of the van and have a poke around.

Turns out the aerial has just come adrift from a mounting plate it appears to just slide into, so I pop it back into place and try and push it down. It won’t go all the way, but a quick shake reveals it’s not going anywhere (unless I hit it on an overhead bar again), so, job done.

That’s not the only job that needs doing though. The heating doesn’t seem to be working – the fan cuts in, but it’s not igniting the gas. I wonder if the charge is low in the leisure batteries – I’ve been charging things off the inverter all night. So I run the engine for a bit, and try again when the Zig controller’s little green light says they’re fully charged (less than five minutes).

Unfortunately that doesn’t do anything, so I check out the other obvious problem. A quick go at lighting the cooker reveals what it is – I’m out of propane.

I google the area, and find a few potential places that might be able to give me a refill. But wait – I’m on a campsite! Surely someone here will have an idea? Tom and I ask a couple of people, and there’s a suggestion that the nearby garage in Wainhouse Corner may be able to help. So we take the van there, only to be met with a surly “we don’t do that” from the not especially friendly clerk. But what about the pile of cylinders outside, I ask? “You can buy one if you want,” comes the taciturn reply.

I consider this for a minute, but bearing in mind that the cylinders all look ancient and decrepit, turn down this kind offer. Instead, I go to the camper van builders next door – Big Wave Campers – as surely they will have an idea of where to go.

Turns out they do – either a garage in Camelford, or a nearer large campsite that they can’t remember the name of. “It’s a couple of miles down on the left, you can’t miss it”. He’s right, we can’t – it’s a big one. Unfortunately there’s only one person on duty, and while she can refill the cylinder, we have to wait while she also takes and delivers the breakfast orders for the site café. More people keep turning up for breakfast, so this is clearly not going to happen soon. As the poor woman looks quite hassled, we head back to Trelay to try again at about lunchtime, when hopefully they’ll have more staff.

After a brief return to Trelay where Tom checks his email and I watch more Upstart Crow, we return to the camping shop and there’s now a whole second person on duty. This is fortunate, as I’m actually none too clear how to remove the gas cylinder.

Turns out you need a spanner to remove the regulator (after turning the valve to CLOSED of course), so I buy one for the princely sum of £2.25. Well, I’m bound to need it again!  I have quite a bit of trouble unscrewing it until I google the Calor gas website and discover that it has a left-handed thread. Doh! Glad I checked before I broke either it or my hand.

That done, we return to Trelay for a final cup of tea before I head off. More chat ensues with Tom and Kathy before some emotional hugs, and I’m back on the road again. I shall miss them.

I’m not heading back Cambridgewards immediately though – to break up the five and a half hour journey I pay a surprise visit to my mum, who’s recently moved to Wellington in Somerset. Takes a while to find the place, because Google Maps doesn’t seem to know the tiny close she lives on, but eventually I do and we have a nice reunion in the form of a pub dinner at the nearby Green Dragon Inn. We then settle down to watch the Liverpool/Paris St Germain match with her partner John. See? I’ve learned how to enjoy football! Thanks, World Cup.

They offer me their spare room for the night, but it seems against the spirit of my experiment to sleep in an actual house, so I politely decline. It’s another night in the van, parked just outside their place – how delightfully perverse.