I was up quite late writing the last blog post, so I wake up correspodingly late. Well, 8:30, anyway. Which is of course 7:30 back in England (till this weekend anyway). Confusing.

It’s chilly in the van – 8.5 degrees C according to the thermostat. But I know I can’t get any gas refills on the continent (no international standard), so rather than waste any on heating I snuggle under the duvet for a brief lie in.

I eventually drag myself out of bed at about 9:30, and determinedly stride off towards Rouen Cathedral. Now I have a reasonable phone signal, I can use Google Maps for navigation – though there’s really no need, as the spire is visible from pretty much anywhere. It’s covered in scaffolding, but it’s unmistakeable.

I join the other tourist gawpers outside and take a few photos of the impressively ornate sculptures adorning the outside. The workmanship is astonishing, as with all cathedrals. I’m an atheist, but even I have to be impressed at the inspiration and hard work that built these things. Many took over a hundred years to build, meaning the people who designed them and started to build them never saw their completion. That’s dedication for you. 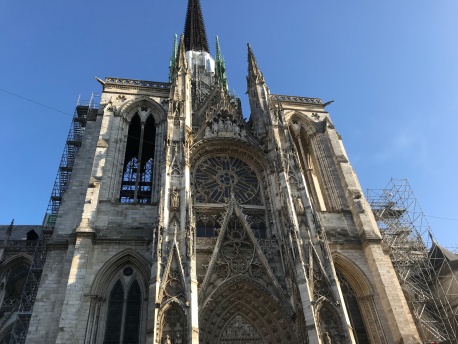 It’s Sunday of course, so the bells are pealing loudly. Mass is about to begin. I do fancy a look inside, so I pop in and stand respectfully at the back. At which point a stern attendant reprimands me (in French of course) for not taking off my hat. I apologise and do so. 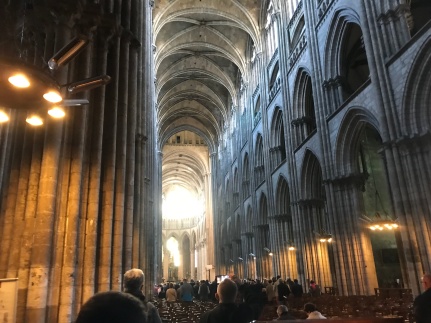 I don’t know how religious France as a country is (it’s nominally very secular), but the Catholics of Rouen certainly take it seriously. Quite a few people kneel and genuflect to the altar as they arrive. And the place is pretty packed. It’s a level of devotion the Church of England don’t really get. Or the Catholics themselves in Ireland these days apparently.

I’ve never actually seen a Catholic mass before (I’m assuming Father Ted is not entirely representative), so I stay and watch for a bit. It’s certainly an impressive setting for it, the organ music booming round the Gothic arches as the choir sings melodically in Latin. Then the procession of officials comes in, the priest preceded by an incense swinging functionary and a bier bearing a statue of presumably a long dead bishop. Got to hand it to Catholicism, they know how to do theatre. 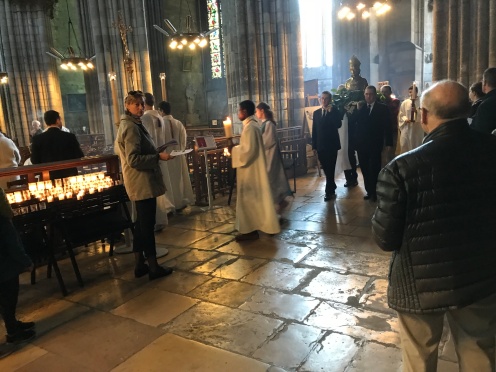 I’d be interested to hear the following rituals, but I know I have another long journey later and more things I want to see first. So I head off in the direction of La Place du Vieux Marche – not just an old market, but the site where Joan of Arc was burnt at the stake for heresy in 1419. 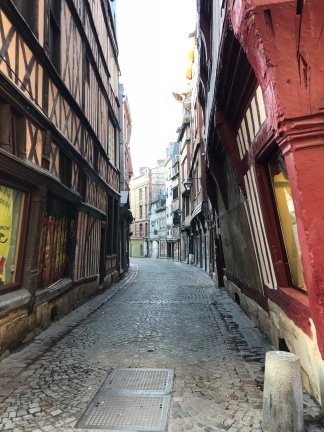 Along the way, I pass through narrow medieval streets that seem largely untouched by the past hundred years of chaos in Europe. Timbered, wattled buildings lean at disconcerting angles above me, but if they’ve stood this long they’re clearly in no danger of falling down.

Above an arch hangs the impressive Gros Horloge – a 14th century astronomical clock with one face either side of the arch. It’s another triumph of workmanship, still running 700 years later – though I’d assume it takes a fair bit of maintenance. Still< I can’t hep wondering why they didn’t come up with a more impressive name than “Big Clock”.

La Place du Vieux Marche itself is dominated by a werd-looking, modernist structure that is the modern Church of Joan of Arc, and is built over the location of her pyre. It’s apparently designed to look like an upturned Viking longboat – quite what connection that would have to St Joan I have no idea. She is, however, represented more directly on the hoarding of a shop selling Joan-related tourist tat.

I’m about to head back to the van when I notice a little cafe on the corner, with people sitting and imbibing coffees in the chill Normandy sunshine. Sod it, I think, I’m on holiday. When in Rouen, do as the… Rouenians? do.

Turns out they have free wifi too, which is how I’m able to post this. I don’t want to leave my valuables in the van just in case, so I’ve got my laptop with me, which is handy. A quick connection of the phone allows me to transfer the phots, et voila!

I’m on my second cappuccino now, and after that it’s back to the van, to chill for a little but before emvbarking on the two and a hlaf hour journey to Orleans. More later… 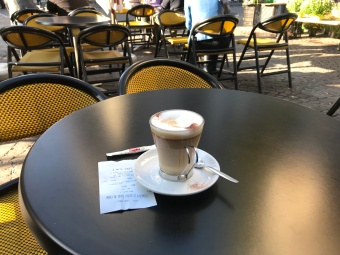