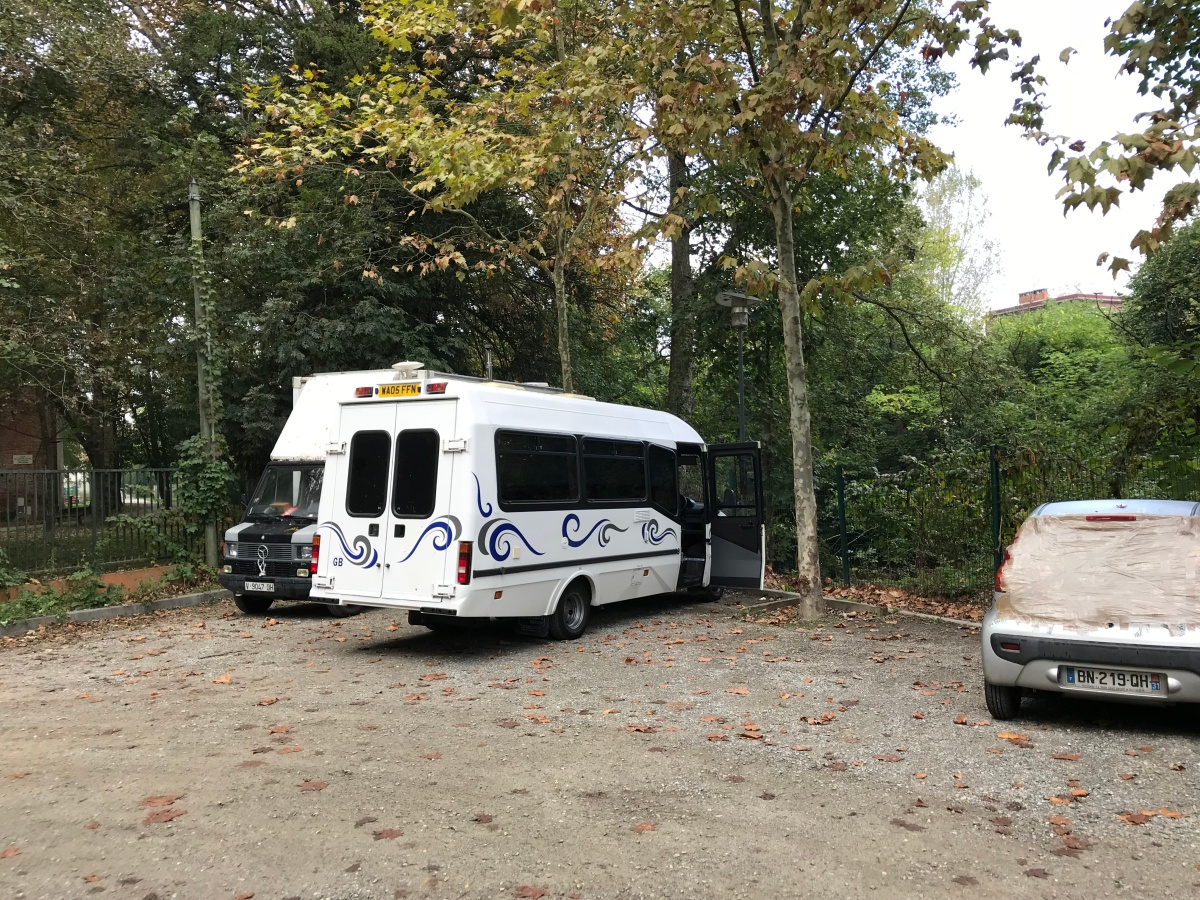 This is my lengthiest single stretch of drive so far, and it takes me to the biggest place i’ve yet visited – Toulouse, capital of the Occitanie region in southern France. Far more so than Orleans or Rouen, Toulouse seems like a proper city; the 4th largest in France, according to Wikipedia. You can tell even before you reach the place. The wide, multi-lane highways with their attendant malls and car showrooms remind me of nothing so much as driving into Los Angeles. 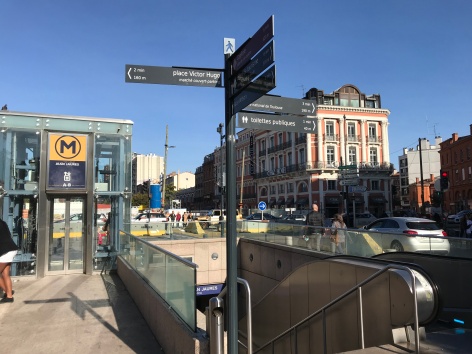 That impression is reinforced by the fact that it’s really sunny. I don’t know if Toulouse is in what people like to refer to as “the South of France” (where the weather is nice), but it’s a scorching day. As I drive in, a billboard proudly proclaims that it is “La Ville d’aeronautique et de l’espace”, a reference to Toulouse’s reputation as a leader in aircraft and space research. Airbus, builder of the world’s largest airliner, the A380, is based here.

All sounds impressive, I think, but it makes me wonder how easy it’s going to be finding somewhere to park up for the night in a proper, bustling city. Park4Night has indicated that you can park for free in the large car park next to the city’s shiny new Exposition Centre, on L’Ile du Ramier, another island in the middle of the city river like L’Ile Lacroix in Rouen.

Google Maps duly takes me there, which involves crossing a disconcertingly narrow metal bridge over the river Garonne. The Exposition Centre is easy to find, gleaming white on the horizon. That’s my view from one side of the van as I drive down Allee du Professor Camille Soula. The view fom the other side is a tent city.

And that’s my first realisation that (like every city) Toulouse is a place of extreme inequality. A shiny new municipal building one side of the road, people forced to live in tents on the other. Many of them look as if they have Algerian heritage; France has never properly dealt with its Algerian population, and they live disproportionately in poverty. 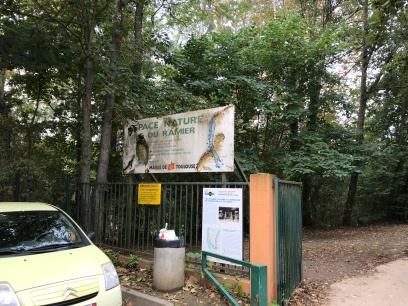 I’ve scarcely got there when a jittery looking young guy, apparently homeless, bustles up to the window and asks me for a light. In English. It’s not brilliant English to be sure, but it’s a sight better than my French. As I get ready to head into town to see a few of the sights, he’s still around the car park. My guess would be that he’s sleeping somewhere round here.

My guess turns out to be right. As I head out later, he asks me for a cigarette and we get to chatting. His name’s Rashid, he says, and he speaks four languages – French, English, Spanish and Arabic. I point out that that’s damn impressive, and surely it could help him get a decent job. But he shrugs and tells me people aren’t keen on hiring a homeless guy, particularly one with Algerian heritage.

We end up talking for quite a while. It’s actually the only real conversation I’ve had in days, and he seems just as deperate for friendship as me. Maybe for something else too; he tells me he’s gay, but if I’m honest I’m not really looking for anything like that just now.

He also tells me he has schizophrenia, which I could have guessed. His social signals are a bit unusual; he stands really close to me, smiles more than you’d expect. But he’s genuinely friendly, and comes off as a nice guy. We chat for a while about a lot of things – racism, Brexit, the state of European politics and Donald Trump. He’s clearly a smart bloke, and it pisses me off that he’s stuck where he is. 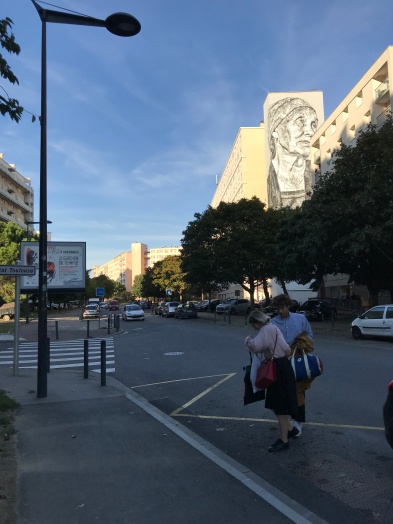 Eventually we part and I head off to town via the local Metro system. The nearest station is Empalot, and to get there I have to walk through L’Habitation Metropole,another sign that, Exposition Centre aside, this is not the most well off neighbourhood. It’s basically what the Americans would call a housing project, grey concrete tower blocks where the city’s less prosperous get dumped. An impressive mural of Mother Theresa on the side of one tower is the only relief from the all-encompassing greyness. It’s exactly like the setting for 1990s movie La Haine, a tale of racist conflict between whites and nationalised Algerians. 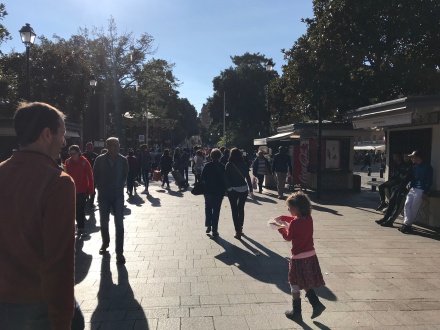 Getting off the Metro at Jean Jaures station, the contrast couldn’t be starker. I’m in La Place du President Wilson (a lot of places here seem to be named after American Presidents), and this is clearly a well-to-do cosmopolitan city. There’s a full size carousel next to an imposing fountain. The buildings are clean and all built from the distinctive reddish brick that gives the place its nickname of ‘The Pink City’. 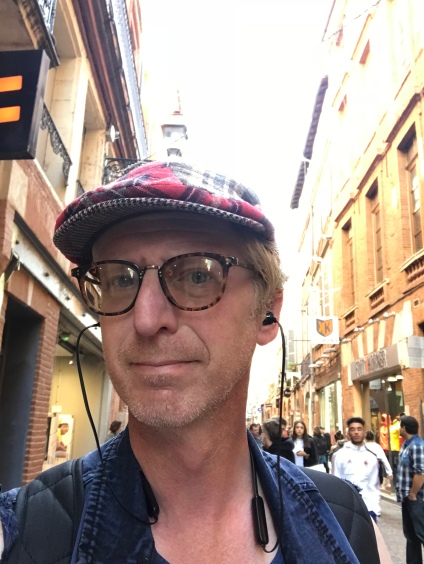 The town centre is a rabbit warren of narrow cobbled alleyways, punctuated by wide squares like the one I arrived in. It looks, at face value, charming. But quickly I realise that all those pretty buildings are occupied by very expensive looking shops. Together with the usual multinational chains you see in every city – Zara, H&M, and inevitably McDonalds. There’s even a C&A – I don’t know if they even still exist in Britain. 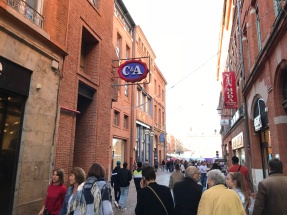 I make an effort to see the sights that aren’t shops – I’ve no desire to go shopping on this trip. The most famous is the Capitole building, an impressive, mostly 18th century structure dominating the wide airy space of the Place du Capitole. On the corner next to it is a McDonalds. 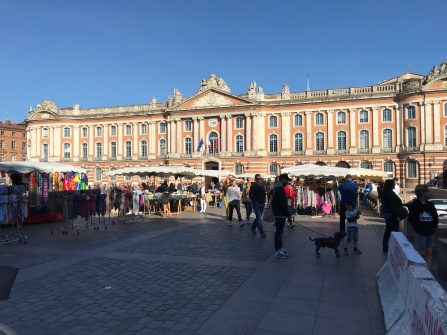 Not too far off is the Toulouse Cathedral By now I’ve come to expect that everywhere I visit in France will have a cathedral, and Toulouse doesn’t disappoint – it has two. Toulouse Cathedral itself has been built and rebuilt many times in its approximately 1000 year history, and the building there now is nothing like as impressive as the grandiose Gothic monuments in Orleans or Rouen. 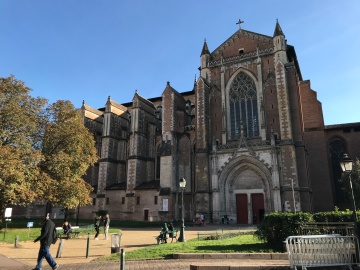 More impressive, though, is the nearby Basilica of St Cernin, which must be roughly the same age but unlike the Cathedral remains as it was when completed in the 13th century. Like everything else in the city, it’s built of those pink bricks, but inside seems gleaming white marble. Statues of little known saints line the walls – really, who is St Roch? (turns out he’s the patron saint of dogs, bachelors and falsely accused people, among other things). 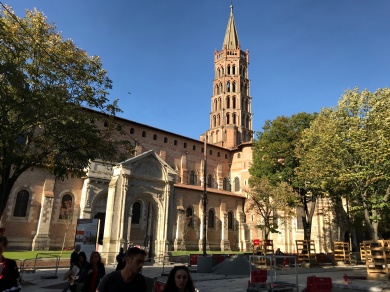 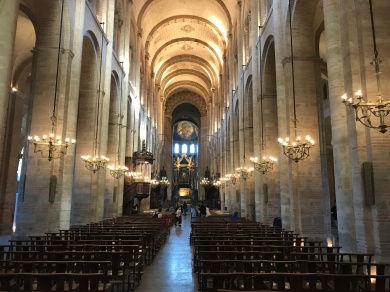 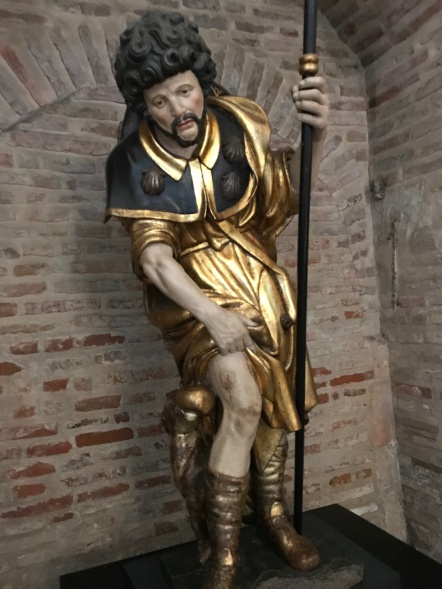 Later on I make an effort to enjoy the city’s nightlife, but it has to be said it’s fairly quiet – it is Tuesday night, after all. I pop into the only one of the city’s gay bars that opens before Wednesday, but there’s only about six people there, and they’re obviously all friends chatting among themselves. The barman doesn’t know any English, and my spoken French isn’t really conversation level, so I just enjoy a couple of beers and head back to the van – the Metro shuts at midnight, so I don’t really have too long to explore. 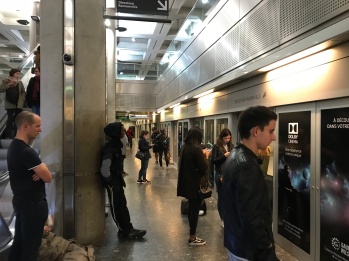 Despite being parked in what you could charitably call a dodgy area, the van is untouched, and I settle down to contemplate before sleeping. Toulouse is pretty, no doubt about that, with some wonderful history to it. And yet the city centre is dominated by the worst kind of international consumerist crap, while the peripheries are full of the left behind like Rashid. It’s no worse in that regard than some other cities, but I can’t say I’ve been warmed towards the place.