After the previous, quite focused episode, The Bridge, this week’s Walking Dead felt more like filler, enlarging on the already-established tensions between the now uneasily-at-peace communities but not resolving anything. On the face of it, it was a fairly uneventful episode (albeit with a bit of Walker action shoehorned in to give it a bit of pace).

Nonetheless, the knowledge that Rick Grimes is on his way out necessarily shades all the admittedly talky dramatic scenes. There was a lot of focus on Rick’s idyllic home life, his status as revered leader, and his philosophy for the future.

All that was already at odds with the feelings of his friends Daryl and Maggie, and this ep took the time to push that conflict a little further, to where it surely must be resolved by the time Andrew Lincoln bows his last. It’s good drama, but it feels overly telegraphed because of that foreknowledge that the leading man is about to leave. How much more of a twist might it have been if we hadn’t known that in advance?

But of course it’s almost impossible to keep that kind of production development secret in these days of internet spoilers, so kudos to the production team for using the foreknowledge to play into the drama. This was a slow ep, but that gave Corey Reed’s script an edge it might not have had otherwise.

The focus of the ep, insofar as it had one, was the murder mystery gripping the bridge-building camp – just who had been offing some of the less savory Saviors? I was surprised to lose Zach McGowan’s Justin so quickly – he’s a great actor, and it’s a shame the show didn’t use more of him.

It didn’t come as a huge surprise that it turned out to be a renegade group of Oceansiders paying off old grudges against their former oppressors. But that was vital in hammering further the wedge between Rick and Michonne on one side, and Daryl and Maggie on the other. From Daryl and Maggie’s perspective, the Oceansiders’ actions were justifiable; shades of the executions after the Nuremburg trials in 1946 came to mind. These were, after all, war criminals.

So it was a dark but not surprising moment when they turned away, unwilling to save the apparently repentant Arat from the blades of vengeance. We’re not there yet, but all this is obviously being built up to play into Rick’s impending death – I’m guessing in some form of heroic sacrifice that resolves all the conflict.

For now though, there wasn’t much tension in the Savior revolt when dastardly Jed decided to take Carol as his hostage. I mean, come on, Carol? There’s no tension there, as she’s already established to be a near-invulnerable superhero. The moment Jed put his knife to her throat, you knew he’d lost.

While this was the obvious ‘A Plot’ there was a ‘B Plot’ threaded through the ep that felt like it was taking place entirely separately – I almost wondered if it was by a different writer, but no, Corey Reed was the only one credited. This was, of course, the continuing mystery of Jadis/Anne and her unidentified helicopter friends, into which Gabriel is being inexorably drawn.

Gabriel hasn’t had much to do recently, so it’s good to have him in the foreground a bit. But still, as I say, this plotline feels totally isolated from the others. The only interaction this week was Gabriel lying to Rick to protect Anne; other than that, they might not even have been on the same show. Both Rick and Negan should be aware of that helicopter, and it’s odd that neither of them have mentioned it.

Not a very gory episode. There were the requisite number of head-stabbings we’ve come to expect from the show of course, and plus points for that Walker with the nastily loose jaw that Cyndie found herself grappling with at one point. 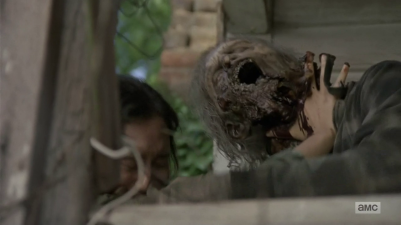 That whole sequence, of Maggie and Cyndie clearing Walkers from the remote shack, felt very much like it had been shoehorned in to provide some undead action as a relief from all the talking. It was nice, though, to note the obvious homage to the original Night of the Living Dead – that burnt out pickup truck by the gas pump, it’s charred occupants still in the cab. 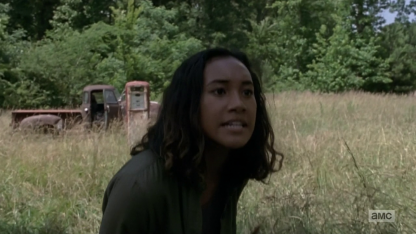 This was, basically, a filler ep. Some good character interaction, made more resonant by the knowledge of Rick’s forthcoming departure, didn’t really make up for the lack of any real action or much plot advancement. The conflict between the communities may have been pushed back another week, but I’d say it’s probably still coming. Didn’t make this ep any livelier though.