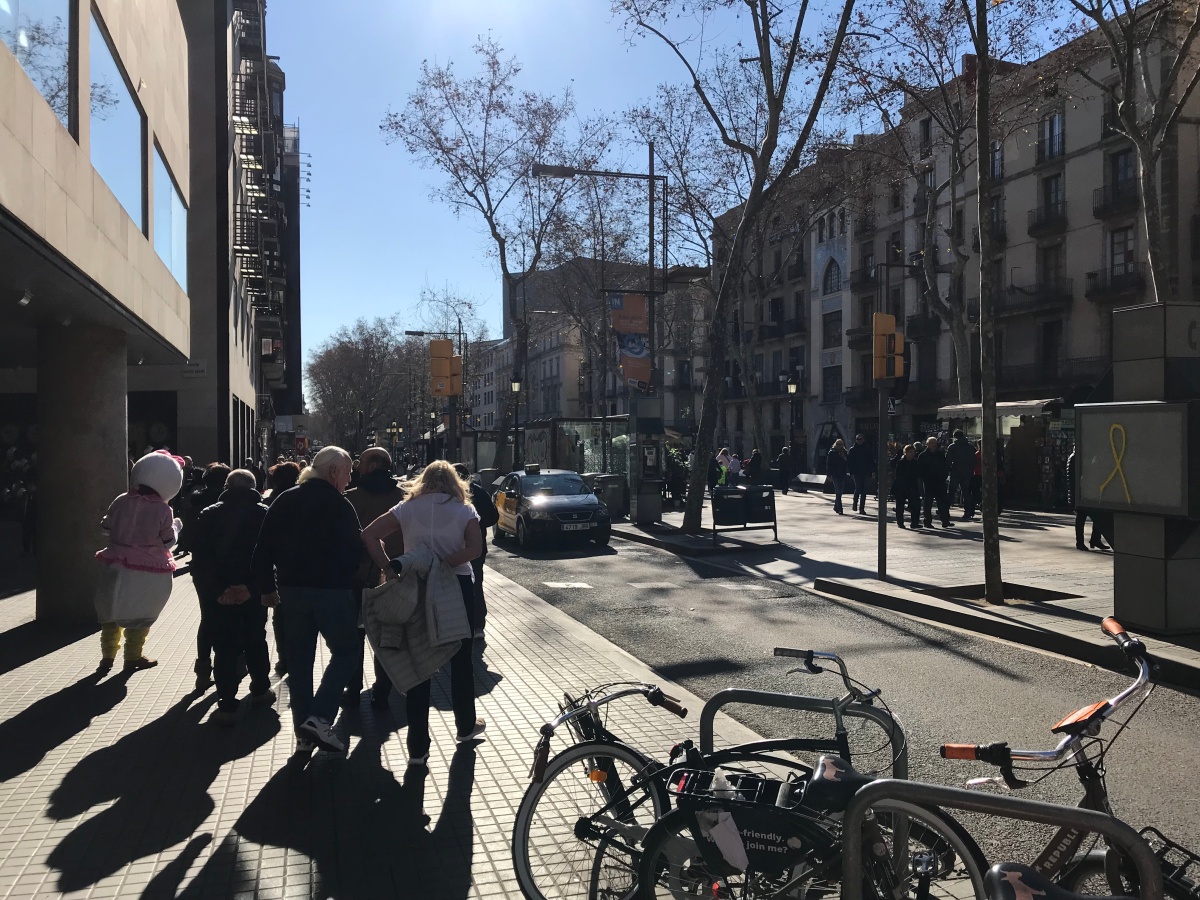 Arriving at the unfortunately named Barcelona El Prat airport, I encounter my first bit of Spanish efficiency as I board the train to town. The train pulls out, slows down, then stops. For ages. Eventually it starts to move, slowly. Then stops. For ages.

I’m in contact with Tom, as I’ll be staying my first night with him, and he tells me this is not usual. But I’m so mellow it doesn’t bother me, even though what should logically have been a twenty minute journey takes over an hour. I while away the time listening to Radio 4 comedy Bleak Expectations, which is about as British a thing as you’re likely to find in Catalonia.

Lugging two backpacks, a satchel and a heavy suitcase is a pain in the arse on the Barcelona Metro, as I struggle to manhandle this lot down the many flights of stairs at Barcelona Sants station. As I near the platform, I find the lift that had been there all along. Bugger.

One change and a few stops later, and I’m at Liceu station on Las Ramblas, where Tom’s meeting me. Thankfully I find the lift before trying to lug my burden up endless stairs, and he turns up minutes after I majestically ascend to the surface by the opera house.

My cold has gotten worse, and I’m constantly coughing and blowing huge wads of snot into the rapidly diminishing supply of tissues that was a last gift from Layla. But even that can’t dampen my enthusiasm as Tom helps me lug all my belongings through the busy streets to his place in El Rawal, in the Gothic Quarter. He’s really done well with this place – the most vibrant area of the city is right outside his front door. OK, so he saw someone arrested for drug dealing as soon as he stepped out today, but that’s a frequent trade off for any interesting area of a city.

After a brief meal and a much needed shower and change of clothes, it’s off for a night on the town. I’ve promised to buy all the drinks in exchange for him putting me up, and we end up at a succession of often-expensive craft beer type places. The first is eye-watering – yes, the beer is nice, but it’s 8 euros a pint. Even the Wild Rover Irish bar I frequented last time is cheap in comparison, so that’s where we go next. They have Lagunitas American IPA on tap, for a mere €6.50!

Tom insists on buying a round. This being Tom, the round is cans of Estrella which we drink while aimlessly wandering. I still love this city; it’s so different from what I’m used to. The people, the architecture, the shops… it’s a new world. And I’m happy to be in it.

We contemplate trying one of El Rawal’s gay bars, but are informed by an eyewateringly sexy guy with a leopardskin coat and Wolverine sideburns that the Madame Jasmine is too full to let any more punters in. No problem, there’s a weird, Buddha-like giant metal cat for Tom to kiss in the mean time.

After that, we end up at Foxy’s bar – not gay, but vibrant, full and with a proper party atmosphere. I realise how much I’ve missed city life after all these years in Cambridge. And Barcelona is so gay-friendly that anywhere might as well be a gay bar. I’ve never seen so many guys holding hands with each other. Outside a café we see a poster advertising a gay club imaginatively called ‘Dick’s’. Bus stops display advice about the best cruising areas and what kind of sex to expect there. This place makes San Francisco look tame.

We call it a night at 2am, and have a nice long sleep in Tom’s slightly chilly flat; no double glazing, no heating, and what passes for winter here, which is warm compared to what I was in two days ago. Still, even I’m glad for the two duvets he’s got.

Next day, hungover and still full of cold, it’s time to move into the apartment the language school arranged for me. For a hefty fee, of course. It’s on Carrer de la Marina, just round the corner from Gaudi’s La Sagrada Familia, and mere steps from Monumental Metro station.

I’m glad I looked up how Barcelona addresses work. Which means I know that the numbers 5-4 mean fifth floor, apartment no 4. Fifth floor of course actually being the sixth floor as we might understand it. Luckily there’s a lift.

I’m greeted by my landlady for the next month, a pleasant young French lady called Marion. Well actually I’m first greeted by her boundlessly enthusiastic little dog, a hugely friendly Bichon Maltese called Mathilde. After much jumping about and licking, she subsides long enough for Marion to show me about and tell me the house rules. Boots off at the door, try  not to use too much water in the shower, smoking on the balcony only… and NO partying. That’s ok, as I don’t expect to have any time for that sort of thing in the next month, but when I’m looking for somewhere permanent I’ll probably want somewhere a little more chilled.

A brief unpack later, and it’s off to meet up with Tom for what I expect to be my last day of leisure for the next month. We were going to go to a Gaudi museum (first Sunday of the month being Free Museum Day), but the queue is gargantuan. Cerveza in the sunshine it is then, followed by another mouthwatering pizza, which we eat in a nearby skate park. Given my taste in men, the eye candy is in great supply.

After a brief nap (Tom could sleep for England), it’s off to El Parrigua bar for some free comedy at the weekly open mic might. Tom knows about this via his friends who are also English teachers. As, it turns out, is just about everyone at the bar, comedians and audience alike. This is going to be a handy place to make connections. I might even try some standup myself 😊

Everyone’s really friendly, and we end up sharing a table with a lovely Nigerian lady called Chiogo, who’s here to do a PhD in journalism. She’s got a really interesting blog – check it out here.

But it’s the first day of my course tomorrow, so I can’t stay out late. The Metro runs till midnight, but it’s only 11pm so no problem getting back to my new digs. Though there is a slight problem when I need a pee and can’t remember which closed door leads to the bathroom. Fortunately the bedroom I accidentally walk into is unoccupied, but I decide to be cautious and take the lift down to the street, where a handy tree is available. Then it’s back to bed for a long sleep that will hopefully start to see off my cold before the first day of my course…