The shindig on Thursday night was only the beginning!

Pride weekend proper here in Barcelona begins on Friday. Thus it is that, after recovering from the Thursday night bash at Placa Universitat, and teaching my solitary Friday afternoon class at Arc de Triomf, I remember that Paolo said there was yet another party on Friday at Placa Reial, just off La Rambla. Pride or not, you’re never far from a free party in Barcelona!

I message Tom, and sure enough he and Paolo are heading there, with the same gang from the previous night. I’m bored sitting at home, so I head to Placa Reial and see the happenings. This turns out to be wise, as the other guys take a while to show up. The way Tom describes it, trying to get that big group organised is like herding cats.

I spend the time watching the preparations from a handy vantage point sitting on a concrete ball. There’s plenty of these in Placa Reial, and they make handy place to sit if you don’t want to buy an overpriced beer from the bars who own all the other seating. It’s quiet as yet, but the beautiful freaks are starting to arrive, in all manner of interesting outfits. In the centre of the square, a stage is being set up, and sound checks done. I find my eyes drawn to one of the technicians; he’s bare chested, sexy as hell, and unusually for a young Barcelona guy, doesn’t have a single tattoo.

Tom, Paolo and the gang turn up expectedly late. In the meantime, I’ve consumed two of the cans of Estrella lurking in my bag. 60 cents a can as opposed to 2 euros a can from the bar is a good deal, and there’s a supermarket just over the road if we need more.

Fortunately, the guys have brought beer too. And the party’s starting to get going. Loud disco music plays, as the stage is occupied by flamboyant dancers of indeterminate gender. Dance remixes of Freddie Mercury solo songs fill the air.

Everyone’s looking sexy in sleeveless wife-beaters, but I’m wearing my habitual waistcoat – only with no shirt underneath. Well, it’s bloody warm! I find a sign in the bin advertising Barcelona’s famed Eroric Museum, and Tom obligingly takes a pic of me holding it. Making sure to include the security guy he thinks is hot, of course 😊

We dance the night away, occasionally heading off for more beer supplies. Fortunately, the square has been outfitted with plenty of temporary toilets, including a bank of urinals for blokes too desperate to queue for the cubicles. Gotta admit, the city prepares well for these events. In Cambridge, you’d probably be looking for a quiet corner to pee.

I remember at some point that I have a tub of gold glitter in my bag, and we all take a minute to make ourselves look sparkly. Well, it’s Pride, innit?

We while away the night dancing, drinking, smoking the occasional joint and having a laugh. Tom and Paolo are an annoyingly adorable couple – that’s my basic misanthropy coming through. Actually I’m really happy that my friend has found someone who makes him happy. And Paolo’s a lovely guy. 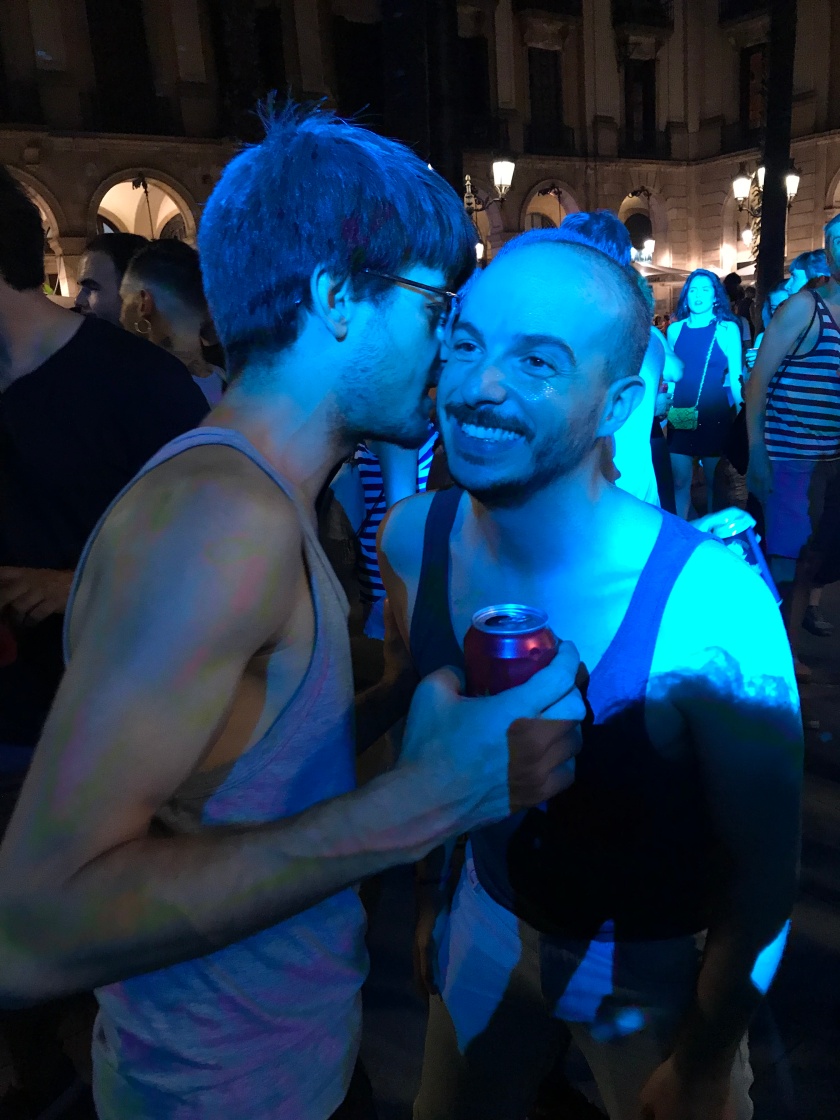 Eventually we all decide it’s best to head for home – the next day is the big day. Pride parade. Big parties. It’s already the wee small hours of the morning, and we all figure it’s a good idea to get some rest. I stumble through the darkened streets, parting company with Tom and Paolo and staggering back to mine. Another beer, I wonder? Perhaps fortunately, the supermarkets are no longer selling it, and no handy chancers appear with cans hanging around the intersections. Home it is, and sleep.

It’s a lazy day for most of Saturday, which is just as well – that was a lot of beer the previous night. Tom messages me in the afternoon – we’re going to meet up at Universitat again. Fine, that’s an easy one. My mate Daz messages me too, we’ve vaguely agreed to meet for Pride. 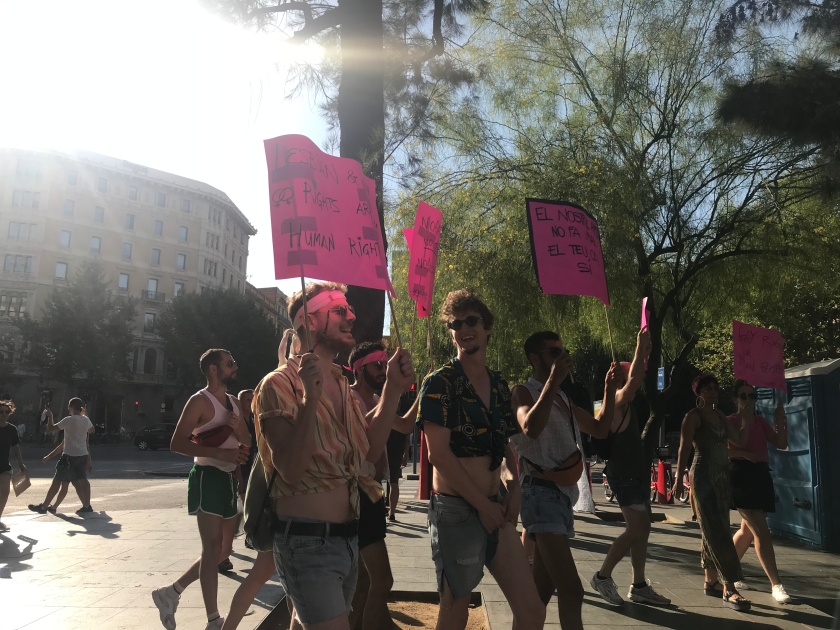 What neither of us realise is that there’s more than one Pride. As it happens, the one Tom and his posse are going to is an alternative, anti-capitalist one, bereft of corporate interference. A proper celebration and protest, rather than a glorified Andrew Christian underwear ad.

The one I’m going to is Placa Universitat (again); I head down there early to beat the crowds, with the ubiquitous cans of Estrella clanking in my bag. As I wait for the guys, I find a handy chair to sit in, though I soon discover the reason it’s the only chair in the square that’s vacant – it’s also the only one in the direct, blazing sunlight. Oh well, I’m sunblocked up, so I relax and watch the crowds arriving. It’s vibrant, full of beautiful freaks and sexy people.

There’s even a graffiti’ed bus.

Tom, Paolo and the guys turn up a little later than they thought, and I soon see why – they’ve been experimenting with makeup 😊 Tom and Paolo have their eyes rather beautifully touched up by a friendly drag queen, and the rest of the guys have dyed their hair pink – temporarily, I assume.

We drink and chat in the glorious sunshine (well, in the shade if we can manage it), and watch the crowd swelling. A band turns up – didn’t catch the name – and play some catchy guitar-driven tunes. I suspect I’m enjoying this more than I would have enjoyed the Vengaboys at the mainstream event. It’s certainly entertaining watching Tom’s first attempt to totter about in high heels, borrowed from the same obliging drag queen. 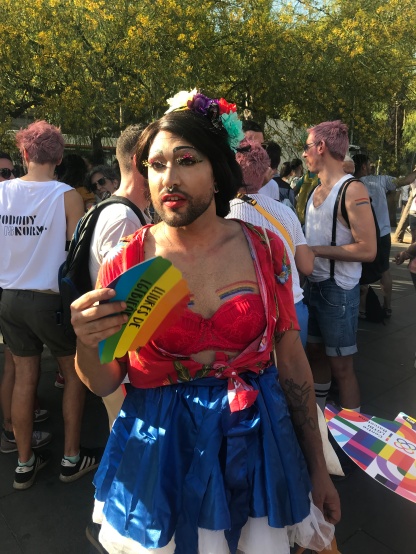 There’s a march too. A proper one that’s about politics and costs nothing to join, unlike the increasingly commercialised ones in England. We join somewhere around the rear, and I’m enjoying Emi’s rather cryptic placard – one side declares “Suck my Gender”, while the other proclaims that “You can sit with ass”.

As we follow the throngs through winding streets, poor old Daz is constantly one step behind, and both of us unaware that we’re actually going to separate events. Eventually we work this out via a series of location exchanges on WhatsApp, and sadly we never do actually meet up. Sorry mate.

Still, it’s a good time with the guys I’m with. At one particularly surreal moment we encounter an 80s themed British group dressed as Margaret Thatcher and striking miners, and I pause for a photo with them. 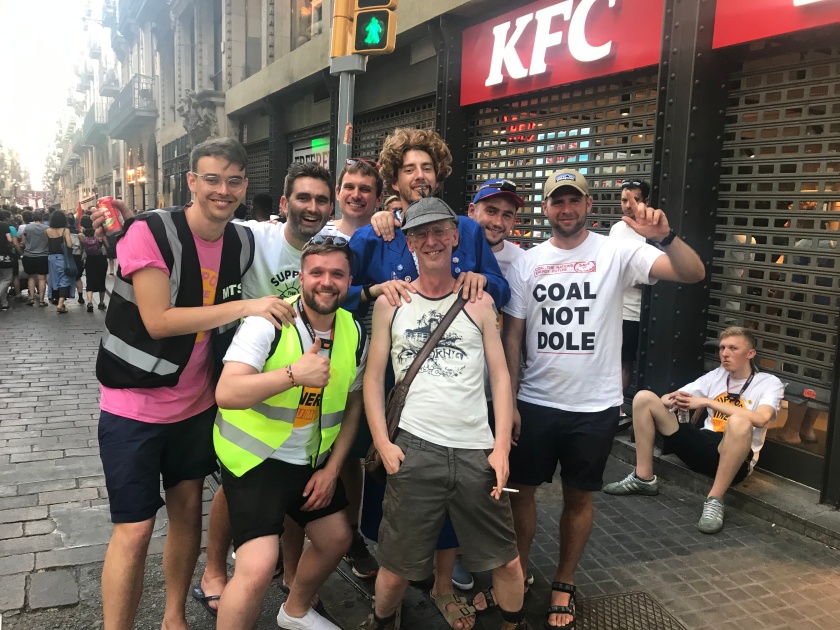 Then we encounter a poetry reading in Catalan from a man standing in a puddle:

Eventually we find ourselves back at Universitat for the evening festivities; more music, more dancing, more beer. At some point I find myself loudly singing the theme tune to Good Omens, and Tom starts dancing to it. Well, it is catchy.

As the night goes on, a suggestion is made that we should go clubbing. There’s a big club on Parallel called Apollo that seems popular – let’s try that. Unfortunately when we get there we discover that everyone else has had the same idea, and the queue to get in is humongous! Some discussion is had about going to a mysterious “rave in a tunnel” somebody’s heard of, but no one knows where to find it. 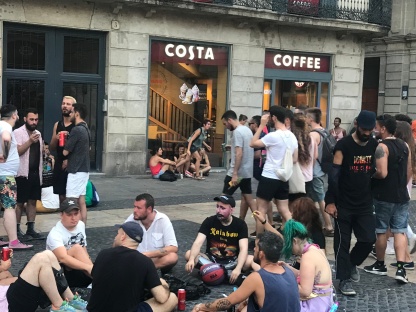 It’s a nice evening, but Tom and Paolo are rather tired. Well, I say ‘tired’, but I suspect they started drinking a great deal earlier than me and have now peaked sadly. So they head for home (well, Paolo’s home), but I’m still having a good time so I stay with the gang.

I find myself chatting and getting on well with a guy called Jose, and he suggests we go up the road to a smaller club. I’m enjoying his company, so I happily agree, as do the others. By this time things are getting a little bleary, so I don’t actually clock the name of the club 😊 Inside, the music is great and the dancefloor pierced by impressive mini-Pink Floyd lasers. It’s also crowded. Very crowded. Imagine trying to drink and dance on a rush hour subway train and you’ll get the idea. People pogo up and down in the narrow spaces available, trying not to spill drinks on each other.

I’m drunk enough to have fun though, and when we finally leave (sometime after 3, I think), I end up going home with Jose as we’re still getting on well. Very well. We head for his bedroom, and I shan’t trouble you with the details on my family-friendly blog 😊 But we also chat sitting on his balcony, which has the most amazing view of the back of Sagrada Familia. 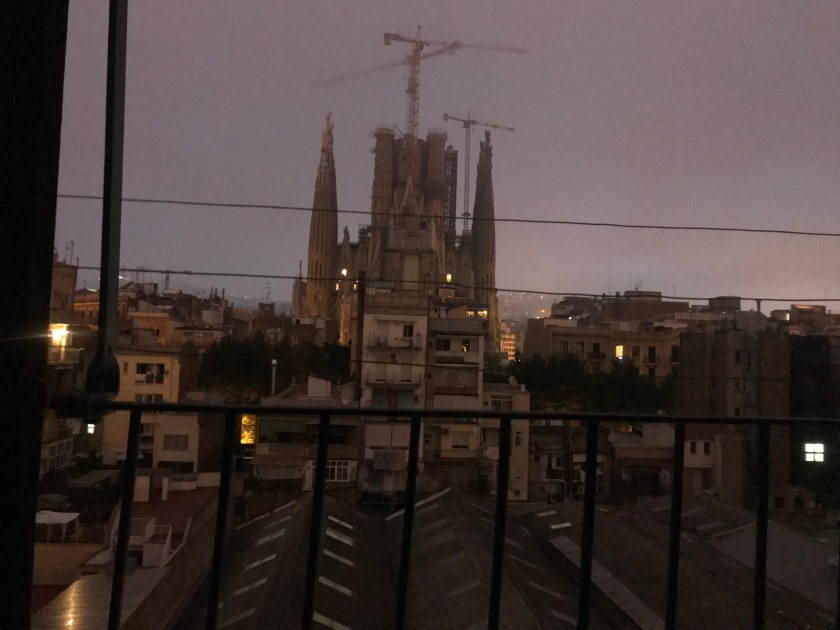 I don’t recall when we drifted to sleep, but in the morning (well, later in the morning), there’s more of the same and a better lit version of that view. Shenanigans are had once more, this time to the ubiquitous soundtrack of Good Omens that I’ve been playing repeatedly since I downloaded it. It’s a surprisingly good accompaniment to… ‘fun’. 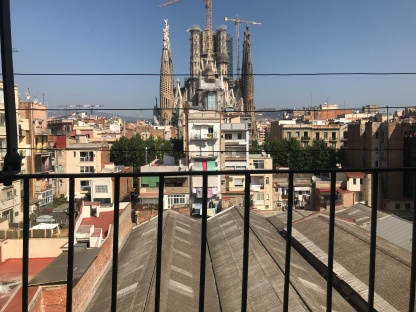 Sadly we both have afternoon picnic plans – he with his family, me with my friends from the standup comedy circuit. So we reluctantly part ways with a kiss, and agree that we have to see each other again. I really hope so, it felt like we clicked.

As I stumble blearily through the ferocious sunshine towards Ciutadella Park for the picnic, I find myself smiling. It’s been a good weekend. Parties, music, friends, shows and fun. And now, a new friend! I couldn’t have asked for a better time – Barcelona’s come through again.