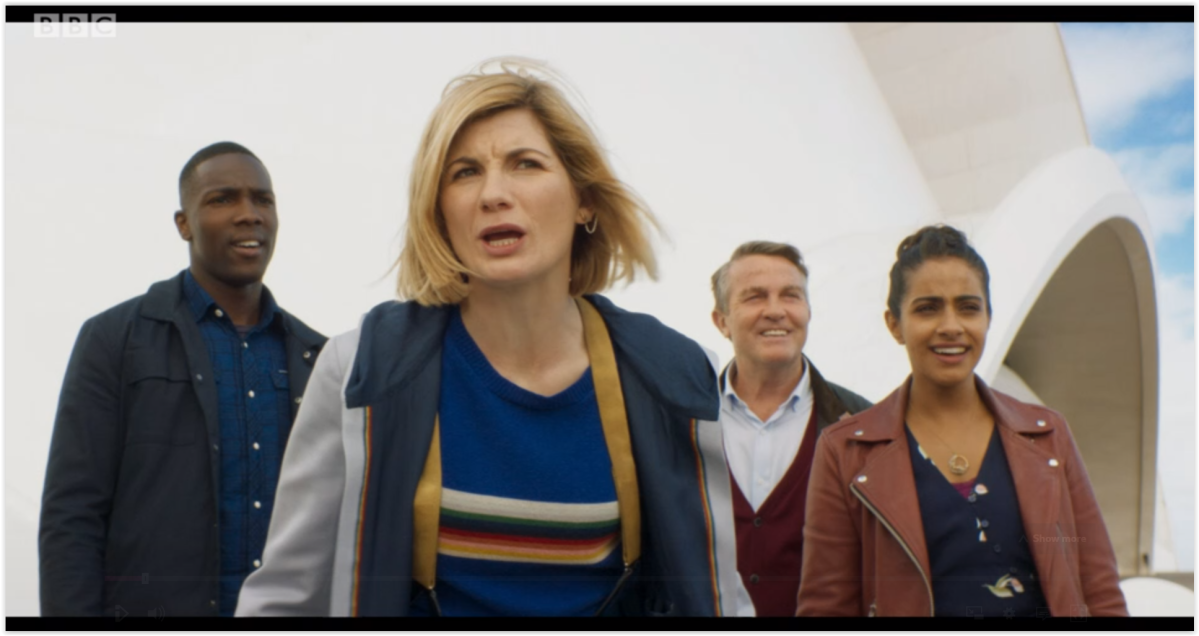 “You want me to tell you that Earth’s going to be ok – but I can’t. In your time, humanity’s busy arguing over the washing up while the house burns down.”

“Doctor Who is too preachy these days”. That’s a view I’ve been hearing on and off since the show’s 2005 return after its lengthy break. It’s been heard more frequently since Chris Chibnall took over, usually as a coded way of justifying unjustifiable objections to a female Doctor and a multi-ethnic regular cast. However, after the sledgehammer unsubtle final speech of Orphan 55, it was a view I was dismayed to find myself agreeing with for the first time – although possibly not for the reasons you’d think, and certainly not for the reasons mentioned above. To be clear – Doctor Who has always been “preachy”. Or, to use a less negatively freighted term, it has never shied away from espousing its central character’s core principles and philosophy on social and political issues. Way back in 1965, asked whether he was an Englishman, First Doctor William Hartnell responded, “Your ideas are too narrow, too small, too crippled… I am a citizen of the universe, and a gentleman to boot”. That may have been written 55 years ago, but it’s a perfect riposte to Theresa May’s repellent 2016 speech characterising migrant workers as “citizens of nowhere”.

The preaching, if you want to call it that, probably reached its height with the Third Doctor’s era, as showrunners Barry Letts and Terrance Dicks found ways of centring whole stories on important social or ecological issues. Pertwee’s Third Doctor may have been the ultimate ‘establishment figure’, with his government job, wine quaffing and gentleman’s club memberships, but he still found time to repeatedly condemn the shortsightedness of humanity’s attitudes to its planet. The Green Death in particular is an angry screed condemning profiteering, rapacious multinational corporations, and putting profit ahead of concerns about poisoning the environment. It didn’t stop with the Third Doctor either. Witness Tom Baker’s cold dismissal of comedy drug dealer Tryst in Nightmare of Eden, or the repeated emphasis on racism, through the character of Ace and her experiences, during the Sylvester McCoy era.

So no, I have precisely zero problem with the show being “preachy” – it’s what it’s always done, and one of the reasons I love it. What I have an objection to is doing it badly, and unfortunately that, for me, was the final nail in the coffin for an ep that had all sorts of other problems (many of them stemming from that central premise). Clearly the intention here was to produce a Green Death-style screed focusing specifically on climate change – a timely issue, and definitely one the show should be dealing with. But not like this. The best Who writing on social issues serves two purposes; to persuade people who disagree, and to provide ammunition for those who do agree. Many’s the time I’ve found myself quoting the show’s take on a particular social, political, or philosophical issue in a debate – providing it was well-written and persuasive.

Last night’s speech, however, is not one I’ll be using. The tone was too hectoring, too lecturey; if you didn’t agree, this was liable to annoy rather than persuade, and if you did, you’d be reluctant to use it yourself for precisely that reason. It also felt bolted on to the story proper rather than arising naturally from the dialogue, in the sort of epilogic coda from simpler times when a central character might turn to the screen and ask, “well, children, what have we learned today?”

I have heard people saying that that’s precisely the point – that the show’s current target audience is younger children than before, and this is a tried and trusted approach in children’s television. But I think children are smarter viewers than that. Chances are, it’s an issue they’re aware of and in agreement with; I doubt they need it spelling out in a way so transparent it’s almost an insult to the viewer’s intelligence. If the nine year old me could get all those points perfectly easily from the far more subtle Green Death, in an era when TV drama frequently was clunky and obvious, I should think that the more media-savvy children of today could pick up on it without needing it spelling out in a way that would have been too clunky even in the early 70s. To be fair, that speech is the last thing you hear in the ep, and for me anyway, it may have soured me on some otherwise good stuff that went before. It could even have worked, split into shorter, separate lines scattered throughout the episode rather than gathered together as a polemic at the end. But the story as a whole felt distorted and unnatural in its need for the drama to fit the message rather than the other way around.

So, obviously the intent was to produce a cautionary tale about our stewardship of the planet and the crisis point it’s fast approaching (if not already passed). For the message to work, it has to be direct, not metaphorical or allegorical. So it can’t be another planet suffering the effects – it has to be Earth. It can’t be the fault of alien influences – it has to be shown to be humanity’s own fault. It can’t be handwaved away with references to the show’s already established, different, histories of future Earth – it has to be shown as a likely future from which there’s no easy escape.

That’s putting a hell of a lot of strictures on your story right from the start, and explains some of the leaps in logic here. The revelation that ‘Orphan 55’ was in fact Earth didn’t come as much of a surprise – though revealing it in exactly the same way as 1986’s The Mysterious Planet (itself nicking from the subway station revelation in Beneath the Planet of the Apes) was part of the reason for that obviousness. 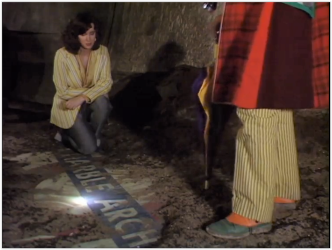 But it also made me then question how precisely none of the characters seemed aware of what the planet was, particularly since they appeared very much to be human. It also seemed unlikely that the only surviving evidence of the previous civilisation would be one subway tunnel – surely the hotel’s builders would have been aware of other relics that could have helped the Doctor place the identity of the planet.

Confronted with the knowledge that the place was Earth, writer Ed Hime had written himself into a corner with the demands of the message the show was trying to impart. The Doctor couldn’t say Earth’s future was secure because she’d seen it, but equally she couldn’t say it was an alternate timeline caused by alien interference in the usual way (see Pyramids of Mars) because that would undermine the warning that, if this happens, it will be humanity’s fault and humanity’s alone. So instead we got some guff about it being “one possible timeline”; something which, in every past iteration, could only occur in cases of external interference. 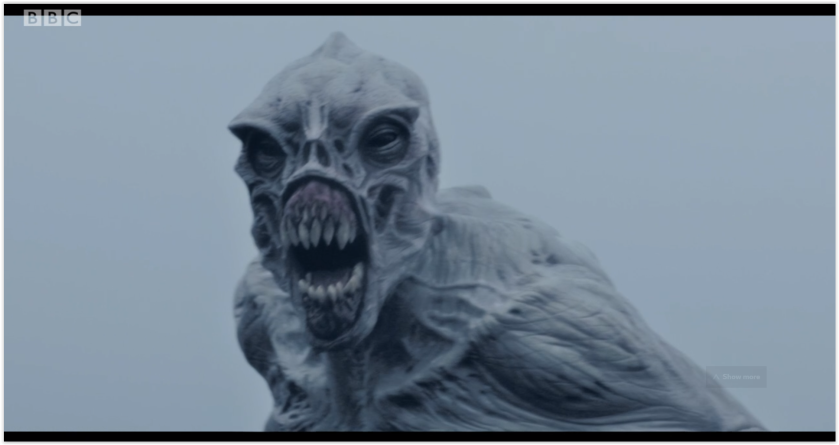 It also meant that the story didn’t feel like it had an ending – in order to emphasise that we need to take action but haven’t, it had to present this timeline as a possibility, not something that could be wiped clean or changed for the better by artificial means. In practice, this left me wondering if the story was finished, or the beginning of some arc involving multiple universes of which this was just one.

Any of these in isolation I probably could have forgiven, but cumulatively they added up to a lack of plausibility. And they weren’t the only problems in a script that seemed unsure what, precisely, it wanted to be. To be even handed, sure, there was some good stuff here. The characters were well-drawn, the initial scenario of the hotel well-realised, and the Aliens-style third act was tense and well-directed. The monsters were well-realised and genuinely scary – plus their name, Dregs, was presumably an allusion to the common phrase “dregs of humanity”, a nicer, more subtle clue to the message. The trouble was, for me, that none of these cohered into a single story. They felt like a selection of ‘good bits’ in search of a way to relate to each other. The first part of the ep felt like it was going to be a fairly light comedy episode, with most of the characters drawn as broadly comic. James Buckley’s incompetent maintenance guy and his far cleverer son felt like sitcom characters (casting Buckley, with his Inbetweeners and Rock and Chips history, pretty much guaranteed this). Furry steward Hyph3n was very much a comic character, likeably played by Amy Booth-Steel with precisely that tone. The elderly couple could have been played for sympathy, but were very much played for laughs throughout, even at the point of both their deaths; this could have worked if the ep had been comedic throughout, but sat badly with the more dramatic tone of its later acts.

To be fair, the show has plenty of history with eps that start out broadly comic then take a turn to drama and/or horror. In particular, this reminded me of some of the stories in Sylvester McCoy’s first season, before they’d worked out how to balance those tones effectively. Paradise Towers and Dragonfire are good examples of this; both stories I love, but ones I recognise as flawed in their execution for that precise reason. The latter even ends up, like here, pastiching Aliens in its later, more dramatic part – Cameron’s movie seems a frequent source of inspiration for the show, with good reason. That later part of this story, with its blasted wasteland, armoured truck and hordes of apex predators, was about as Aliens as you could get without actually calling the planet LV426. And it did hold the attention well as the characters were picked off while simultaneously revealing hidden secrets that drove the story. No problem with any of that, except that it didn’t feel like it was part of the story I’d started watching. Given this material to work with, Jodie Whittaker did her best. That final speech may have been misjudged and hamfisted, but she delivered it with all the earnest conviction that she could. The rest of the ‘fam’, sadly, were less well-served, with only Ryan getting much to do in his comedic ‘Hopper virus’ infection and later his possibly requited feelings for the mysterious Bella. I guess the frustrating thing about this story, for me, was that feeling that it could have been so much better, based on its constituent parts. I have a similar feeling about my own personal bete noire of the show’s recent years, the similarly ‘preachy’ Kill the Moon – that too twisted its story unnaturally to serve its message, and hammered it home with all the subtlety of a piledriver when audiences were smart enough to not need it spelling out.

As far as I’m concerned, Doctor Who can never be too preachy. It’s been one of the points of the show from its very earliest days. But Orphan 55, struggling in the self-imposed straitjacket of the message it was trying to convey, committed, for me, a cardinal sin of the show – it ‘preached’ in an obvious, unpersuasive and ineffective way that stripped its message of credibility. That was surely the opposite of the intention.