So ok – we’ve just had a version, at least, of a funeral for my mum. I couldn’t be there, and neither could many people, but my brother Tim and his wife Karen were there, along with her partner John and his daughter Jo, and mum’s old friend Gareth.

It was webcast, and I was able to read the eulogy I’d written by phone from my apartment here in Barcelona. I’m posting it here, for all those who knew her, all those who wanted to meet her, and all those who loved her, here and all over the world.

“If you wear black, then kindly, irritating strangers will touch your arm consolingly and inform you that the world keeps on turning.

“They’re right. It does. No matter how much you beg it to stop.

“It turns and lets grenadine spill over the horizon, sends hard bars of gold through my window and I wake up and feel happy for three seconds and then I remember.

“It turns and tips people out of their beds and into their cars, their offices, an avalanche of tiny men and women tumbling through life… all trying not to think about what’s waiting at the bottom.

“And then the world turns… and somebody falls off… and oh God, it’s such a long way down.”

Not my words, though I wish I’d written them. That’s the magnificent Alan Moore, with as good a description of grief as any I’ve ever read. I think any of us who’ve ever lost anyone will recognise the feelings those words describe. I’ve been feeling them since February 29th, the day Maggie, partner of John, wife of Jim, sister of Ron, and mum to me and Tim, left us for the last time.

And yet, and yet… despite those feelings, this shouldn’t be a time of commiseration, but of celebration. Celebration of this remarkable woman, and of a life well lived, that touched those of so many others. Of somebody who always tried to be her best, and to do the decent thing. The kind thing.

One of the many, many things I have to thank mum for is my lifelong love of the TV show Doctor Who. In fact, my very earliest memory is not of her, or my dad, or our house, but of episode 3 of Planet of the Daleks. Well, what better way to keep an unruly, inquisitive kid happy than to stick him in front of the TV on a Saturday afternoon?

What thrilled me about Doctor Who was the idea that you could take a journey through anywhere in time and space, having adventures all the while. But what else are our lives but journeys through time and space, with adventures more thrilling than any involving Daleks, or Cybermen, or Time Lords? Ordinary lives are so extraordinary. Every one of us is unique, a little thermodynamic miracle. Nobody else in the universe can do what we’re doing or be who we are. And so it was for Ethel Margaret Cave, my mother.

Maggie’s adventure spanned an epic 81 years, its beginning in 1938 Tyneside, a time and place so far removed from what we know now. A world that had only seen one World War, where nobody had heard of teenagers, or the Beatles, or Margaret Thatcher, or the internet. Or even, for many people, indoor toilets.

If you’re alive, and young, now, it’s a world as alien as any far distant planet. And her journey took her through so much of history, from the little girl hiding from German bombs in an Anderson shelter, to the vivacious movie fan of her teens and twenties cooing over Audie Murphy and Cliff Richard, through the years of Cool Britannia when Carnaby Street was the king of fashion… Through miniskirts, and British Leyland, and British Steel, through yuppies and nimbies, and the Cold War and the fall of the Berlin Wall.

But ordinary lives aren’t made of those big events, but the small ones that loom so large for all of us. From the still-thriving industrial North East, she came to the curtain-twitching suburbs of Banbury in the Home Counties, where her love of dance and musicals brought her to the local Operatic Society, which always seemed to be her real home. She loved musicals, and dancing, and the cosy satire of Gilbert and Sullivan… and so here, she blossomed, and became everything she wanted to be. A dancer, a choreographer, a person full of song and joy. 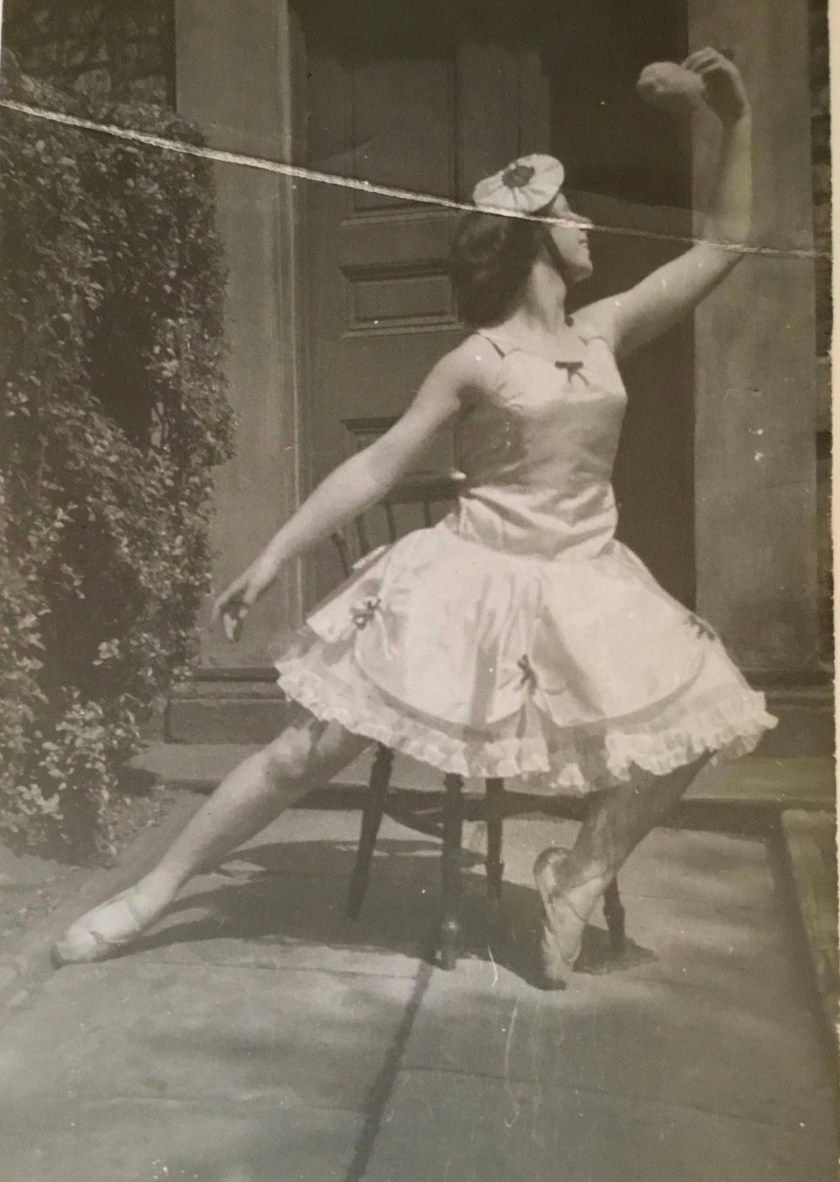 And a person who, unconventionally then, rejected her original, much-disliked first name – much to the confusion of her Geordie relatives who saw her billed as ‘Maggie’ rather than ‘Ethel’ on her surprising national TV debut as a contestant on the BBC game show Blankety Blank.

Along the way, she had the turn of fortune to give birth to two children – both boys, which must have been difficult for her with no female company. It can’t have been any easier when her marriage to our father came to an end.

I’ve plenty of memories of her throughout my own increasingly long life, and I’m sure Tim does too. And yet it’s those memories of the three of us alone that really linger, and the knowledge – unknown to us kids at the time of course – of how hard she must have had to work as a single parent in the 70s, a time when such things were still comparatively rare. 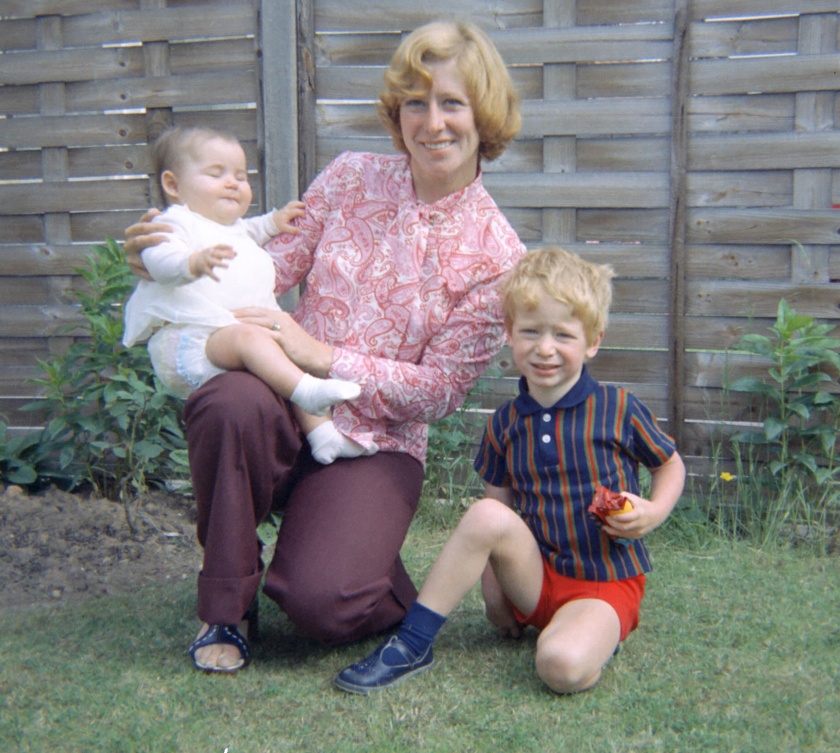 I look back now, and I’m in awe at the strength she must have had. She had to bring up, and provide for, two children while working – she must have been exhausted! And yet, looking back, it never showed. Perhaps she talked about it to her grown-up friends – like Miranda Hutchings, her best mate and almost a second mum to me and my brother. Or even John Eagles, the dashing young man she met in 1965 who would become such a major player in the adventure that was her life.

But us kids, we knew nothing of those hardships. No, we just left our Lego bricks upended on the floor for her to stand on; complained when we had to eat mince, carrots and mash again; and in my case, treated her as the BBC complaints department when series 2 of Blake’s 7 ended on a cliffhanger without finishing the story. That was the world she gave us, where such unimportant things seemed a matter of life and death. She shielded us from all the pain of the world, just like mothers always do, and we were so oblivious it never even occurred to us to thank her. Just like children always are.

I’d like to say I was glad when she finally met, and got married to, another man; but I was an obnoxious child, and didn’t appreciate what a great thing she’d found in Jim Cheeseborough until almost too late. But he was great, and most importantly, he made her happy. They got married in 1981, the same year as Prince Charles and Lady Diana Spencer; I remember the street parties, and thinking they should have been for her.

I may not have appreciated it at the time, but now I’m so grateful for the sixteen happy years she had with Jim. He was an extraordinary ordinary man, and it’s one of my greatest regrets that I was too immature and dumb to realise it then – it’s called being a teenager. I got to know him, and love him, better later in my life, when I’d grown up enough to have some sense; but sadly our chances to chat over a pint like mates would come to an end sooner than any fair universe should have allowed.

But I remember those years fondly now. The family holidays in Tynemouth where I got so sunburned I could barely walk, and the way mum looked after me; the trips to the seaside in her wheezing brown Austin Allegro with its inconveniently detaching rear seat; the way she had to put up with us insisting on playing the best of Queen over and over again during the long journeys. She gave up driving later in life – I used to joke that it was because it interfered with her drinking, but really I have a suspicion that it was to avoid having to hear any more of Freddie Mercury and Brian May. And of course having to try to teach her two eager student driver sons, something that would tax the patience of a saint.

But in any adventure, there has to be some tragedy, and mum’s was when she lost Jim far, far too early to the same ailment that eventually took her from us. They’d moved by then, back up to the North East, and she must have been so lonely, spending those early retirement years alone when she should have grown old with the man she loved.

She never showed it, of course; at least not often. And I was glad she had so many friends to keep her company, whether it was her beloved cats, or her neighbour Lesley or her mates in chatrooms all over the planet. Maggie may not have been the most tech-savvy person in the world, but she took to internet chatrooms like a pro and soon became as loved by her online friends as the ones In Real Life. It’s been heartwarming to see how loved she was even by people she never actually met, and we’ve been moved by Facebook tributes from people we never even knew she knew.

And then, of course, she got reacquainted with John Eagles, that dashing young man of her youth. They were both alone by then, but they loved each other and realised that they could be alone together. And then, simply, together. John made her so happy in those last fifteen years of her life, and I know she made him just as happy too. From oceangoing cruises to concerts by her beloved Michael Ball, the last leg of her journey through time and space was as thrilling as any of the earlier ones – and John was her constant companion all through the adventure. I’m so grateful to him.

And now, it seems like her adventure is over. I’m not a religious man; I don’t believe in traditional ideas of heaven, or the afterlife. And yet, I’ll admit I don’t know what happens when we die. It’s the most natural, but also the most unknown, thing in our lives. Nobody’s ever come back to tell us what’s next. So right now, when I’m feeling her loss so much, I wonder – is her journey really over? Or has it just taken her to some other dimension, some parallel universe where she can be reunited with childhood friends, with past cats, and with her beloved Jim?

I don’t know, and of course none of us can. But what I do know is what a fantastic person Maggie was, and how loved she was by so many people. A mother, a dancer, a drinker, a singer, a wit… a heroine of her own adventure. Raise a glass to her, not in sorrow, but in joy. Celebrate her life, her music, her dancing, and her passion. Of course we’ll grieve, but I know she would have wanted us to remember that, in the midst of death, we are in life.

2 thoughts on “Maggie – remembering my mum”