“Have you ever had to kill people, because they’d already killed your friends and they were coming for you next? Have you ever done things that made you feel afraid of yourself afterward? Have you ever been covered in so much blood that you didn’t know if it was yours, a Walker’s, or your friend’s?” 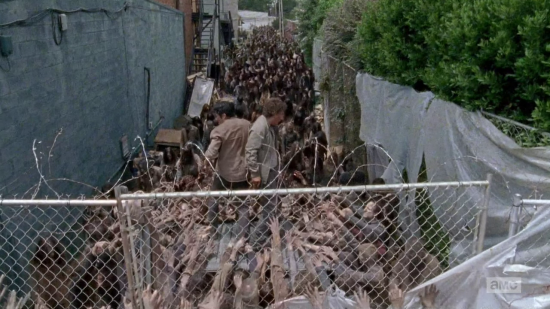 Blimey. Even by Walking Dead standards, that was bleak. I mean, sure, there was plenty of action – and oodles of gore – but even this show rarely offers an episode so suffused with hopelessness. We knew the Wolves’ attack, and that blaring truck horn, had put a crimp in Rick’s Walker-herding plan, but I wasn’t prepared for quite how catastrophically wrong it all went as a result. 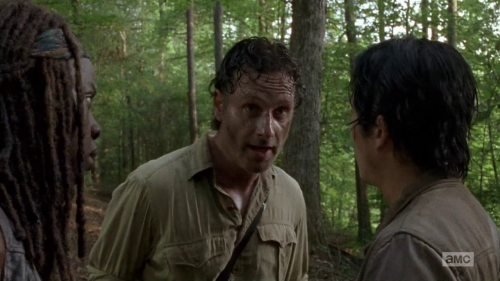 Not for the first time in the show’s history, the script (by old hand Angela Kang) had all the character and plot beats of a classic war movie. The near-impossible mission, the battle-hardened veterans trying to keep the green, inexperienced rookies alive, the coward cutting and running, the doomed soldier’s farewell letter to his wife – it was all here, along with plenty of other war movie tropes.

The ep also served as a devastating reminder of just how dangerous the Walkers can be. With human villains foregrounded so much of late, the shambling, slow undead have seemed a more moderate threat, and easily dealt with by the experienced members of Rick’s group. But that was rarely more than a few at a time. Here, we saw how these near-mindless, slow creatures can be lethal if they catch you en masse – even if you’ve survived the whole show so far. 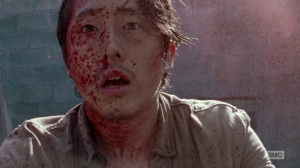 Yes, for the first time this season, the show has done its trick of offing one of the major characters at a time when you’d least expect it. Not only that, but the major character in question seemed one of the least likely to buy it. One of only three characters to make it this far from the very first episode (albeit in voice only at that point), it was an absolute shocker to say goodbye to Glenn. So much so that I’m still wondering if he could actually have found a way out of it.

In another classic war movie trope, it was the traumatised, increasingly catatonic rookie who ended up being the seeming death of the experienced, capable veteran. Glenn’s former nemesis Nicholas had seemed to be turning his survival skills around, but the ep saw him increasingly zoning out at the horrors around him. Building with grim inevitability up till the point where, out of ammo and surrounded by hordes of Walkers, he simply said “thank you” to his mentor (giving the episode its title) then suddenly, shockingly, shot himself in the head.

Having already seen plenty of Alexandrians bite the dust already by that point, it was nonetheless a shock, as Nicholas had started to engender some sympathy in his eagerness to learn from Glenn. But his suicide was an ultimate act of cowardice, and stupidly ended up dragging Glenn too off the dumpster they’d been ‘safe’ on top of. Right into the hungry hands of the Walkers below. 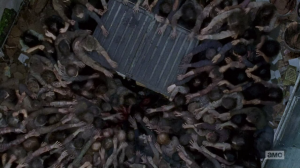 Could Glenn have survived? It looked very unlikely, but then again we only saw his screaming face in close up, and didn’t see where all those bloody entrails were being pulled from. It looked like Nicholas’ body fell on top of him – could it have been his guts the Walkers were pulling out?

Frankly, I doubt it. The show’s done a few implausible things in its time, but for Glenn to get out of this would be pretty much unbelievable. I think he’s gone, which is going to send seismic shocks through Rick’s group. Sad to say goodbye to Steven Yeun, who’s made Glenn consistently likeable (and not at all unattractive) for six years now. Still, in a show where we know any major character can die at any point, he’d seemed almost untouchable. Makes you wonder about, say, Daryl, Carl… or even Rick. 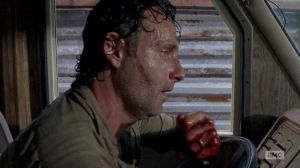 Because Rick himself did not look too well off by the end of the ep. The script was basically structured around, principally, three narratives – as the group split up, Rick rather rashly went off on his own to retrieve the RV and use it to distract the Walkers heading for Alexandria; while Michonne and Glenn took the ever-shrinking band of survivors off towards home, only to find themselves cornered by the herd. Then they too split up, Glenn and Nicholas heading out in an effort to distract these Walkers – with tragic results.

Rick, though, had little trouble fighting off the few Walkers he encountered on his frantic run towards the RV. Or did he? He obviously hurt his hand somehow killing those three on the road; was he bitten? Or did he just slash his hand against the machete jammed into that Walker’s shoulder? Either way, after fighting off a surprise attack force of Wolves (the ones Morgan persuaded to leave, ironically) even with his hand injured, he doesn’t look in good shape to deal with the Walkers now converging en masse on the RV. Mind you, it might be a good idea if he shut the door… 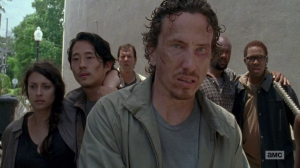 Taking the role of the inexperienced rookies from the war movies, the Alexandrians on the mission were dropping like flies throughout. With the chaos the plan had descended into, it was no surprise to hear yet more misgivings about Rick’s leadership; he needn’t be too worried about it though, as virtually all his critics were dead by the episode’s mid-point.

As with those war movies, there was grim fun to be had in guessing who’d make it and who wouldn’t. Obviously Sturgess, who did a runner, would die because he let the side down. It was no surprise that the two with injured legs should nobly volunteer to stay behind, since they were slowing the group down; slightly more surprise that one actually made it back to Alexandria in the end. And Scott was obviously doomed from the moment he started telling Michonne about his wife. Just think of those bit part soldiers in any WW2 movie who take advantage of a quiet moment to tell their friends about the girl back home, only to get their heads blown off as the huge attack begins. 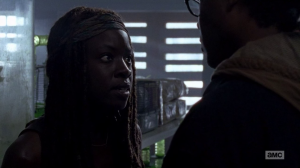 The scenes in the pet store too were straight out of war movies, Michonne having to educate the paranoid Heath about the realities of their situation. Danai Gurira was superb here, perfectly conveying the horror she knows she could become, but may have to to protect her friends. Because the one thing she and Heath agreed on was the old war movie standby – no one gets left behind.

Obviously though, several did, dragged down by the unstoppable mass of Walkers. The direction, by Michael Slovis (who’s also worked on Game of Thrones) was kinetic and claustrophobic, as every turn in the abandoned town seemed to lead to a dead end with a crowd of Walkers blocking the only exit. The set piece of Michonne’s group frantically climbing that fence as the herd advanced inexorably towards them was a heart-stoppingly tense sequence; it was no surprise to see Scott go down, especially after Michonne’s arm-written message, “you’re getting home”. I reckon that pretty much sealed his fate, after writing that note and all. 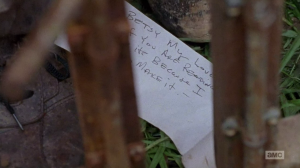 God, where do you start? This must have been the goriest ep in a very long time, the unprepared Alexandrians providing plenty of handy ready meals for the Walkers. There was throat ripping: 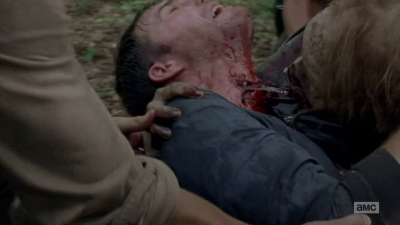 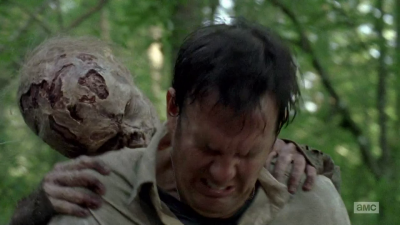 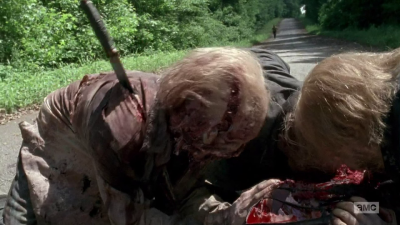 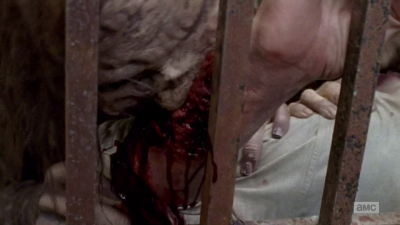 The unfortunate fate of Sturgess: 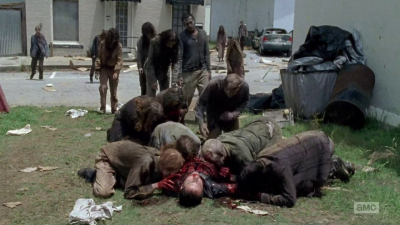 All courtesy of some of the most disgustingly decomposed Walkers we’ve seen yet: 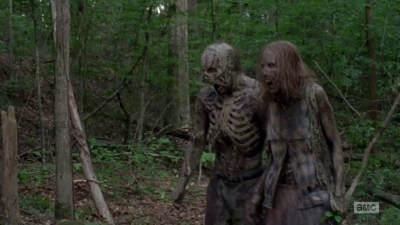 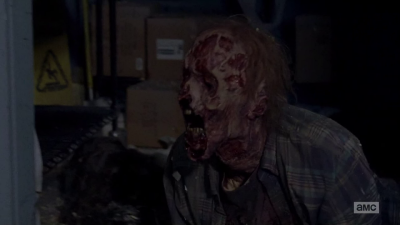 But of course, the absolute worst moment has to be this: 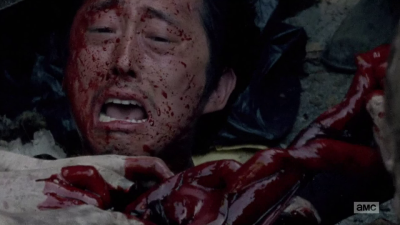 Comparing this ep to a classic war movie in no way does it a disservice. Like the best war movies, it was relentlessly grim, harrowing, and ultimately hopeless, building up characters you like only to cruelly snatch them away. Interestingly, the more serialised format of the show this year means that the first three parts have basically overlapped – meaning that (flashbacks aside), barely more than a couple of hours have passed since the season began. And our heroes (the ones still alive) aren’t out of it yet. This may be the most extended short time frame I’ve ever seen in a TV show.

Next week, I gather, we’ve another extra length episode – presumably to at least give the gang a breather, however many of them may be left when that herd has been somehow dealt with. Then they’ll have to pick up after the Wolves and mourn their dead. Maggie is not going to be happy having lost her dad and her sister in quick succession not that long ago. These must be the most action (and casualty) packed eps in a season since the prison takeover in season three – it doesn’t look like the show’s lost any of its momentum. Or its power to shock. 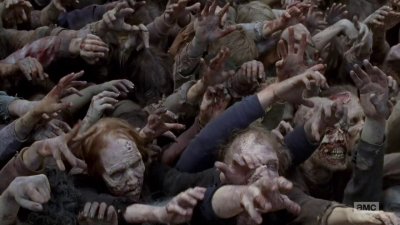 One thought on “The Walking Dead: Season 6, Episode 3 – Thank You”