“Any living thing in this world, including my family and friends could turn into a Zygon and kill me. Any second now. It’s not paranoia when it’s real.”

After all the existential sturm und drang of recent episodes, you might have wanted a very traditional Doctor Who story; something with blobby aliens trying to take over the world, faced down by our hero and his plucky band of associates. Something, in fact, like a 1970s UNIT story.

The Zygon Invasion is certainly that, and alongside the likes of The Green Death and Invasion of the Dinosaurs, includes a fair amount of social commentary. It’s often as ham fisted as those too, but not always; there are some clever ideas in here. Certainly more so than in Peter Harness’ previous script, my personal bete noire Kill the Moon. While that story had its moments on the surface, it was clumsily paced, sledgehammer-unsubtle in its abortion analogy, and most unforgivably of all, sidestepped an intriguing moral question by breaking its own in-universe established facts at the conclusion.

Zygon Invasion too is extremely uneven in its pacing, and similarly unsubtle in its analogy of human/Zygon tension equating to current paranoia about immigrants and Muslims. But refreshingly it hasn’t (as yet) fudged the issue the way Kill the Moon did. There’s stuff in here to make you ask questions, but it doesn’t spoonfeed you the author’s personal views as answers. At least not yet – part two may change that.

I never expected the dangling loose end of the Zygon peace treaty from Name of the Doctor to go unresolved; even less so with the shock death of fan favourite Osgood last year. Everyone knew that, after the anniversary story, there were two of her. The only question was, when would the other one show up? 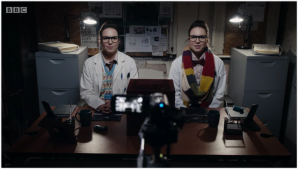 I’m actually rather ambivalent about having her back. Yes, she’s a great character, and Ingrid Oliver is marvellous in the role. But her death in Death in Heaven was meant to shock, to emphasise that however likeable the Master’s new incarnation may seem, she’s still utterly amoral and sadistic. Having Osgood back feels like the return of an unloved trope of this era of the show, one I hoped we’d seen the back of with the demise of Danny Pink – the possibility that any character’s death can be undone, thereby depriving the threat of death of any meaning or jeopardy.

Yes, I know there were two Osgoods, but I’d hoped the Zygon might have moved on and taken another form. But no, while I’m sure plenty of fans are happy to see Osgood back, it retrospectively undercuts the drama and tragedy of her death in just the same way as Rose Tyler’s ‘happy ending’ with the duplicate Tenth Doctor does of her tragic exit at the end of Season Two. Especially since Jaye Griffiths’ Jac is virtually the same character, who seemed to have been brought in as a direct replacement. I may have my problems with Peter Harness’ writing, but I sense the fingerprints of Steven Moffat all over this one.

Still, back Osgood is, and taking an important central role in the action. She’s accompanied by the rest of what’s rapidly becoming the 21st century ‘UNIT family’, along with Kate Stewart, Jac, and of course, Clara Oswald. We also got to meet another UNIT operative in Rebecca Front’s paranoid, trigger-happy Colonel Walsh. Front was as excellent as always, but as the nominated warmonger for the humans, I’d be surprised if she makes it out alive after next week. UNIT HQ’s a bit more down at heel than previously, but nice to see that portrait on the wall…

The Zygons too had their warmongers, which was where the none-too subtle parallel was made with the current paranoia about the West’s Muslim population. Harness’ script went to great pains to demonstrate that this was “not all Zygons”; rather, a “radicalised faction”. Just in case you didn’t get the point, he then showed the kidnapped Osgood in a typical online hostage video complete with factional insignia and list of demands. And then the Doctor got to make a quip about them “stealing your benefits”. Later, Kate Stewart encountered a hostility in New Mexico towards annoying immigrant Brits, putting the boot on the other foot, as it were.

OK, definitely not subtle. But then, neither was The Green Death. At least the script was even-handed, giving us some insight into the motivation of the Zygon radicals and not giving the humans an easy ride either. The attempted drone attack on their base in fictional Eastern country ‘Turmezistan’ seemed all too plausible, and none too laudable. And the way they avoided it was one of the ep’s more inspired touches – after all, even equipped with the rational knowledge that it’s an alien shapeshifter, could you emotionally cope with shooting your mum in the face?

Fittingly, the whole thing had a very obvious vibe of sci fi classic Invasion of the Body Snatchers, in which familiar faces were replaced overnight by identical but emotionless strangers. The ‘pods’ discovered in subterranean London were an obvious shout out, as was the deserted New Mexico town of Truth or Consequences (a real place, incidentally). And as in the 1978 version of Body Snatchers, the Zygons’ unfortunate victims were reduced to piles of the sort of stuff you find when you empty your vacuum cleaner.

Setting that part of the story in that particular town was one of the episode’s more subtle touches. The name Truth or Consequences had become a motto for the Zygon radicals, and gave the clue to their motives. No longer content to live in hiding, they wanted to emerge as their true selves, or humanity would face the consequences. If you’re gay and have spent any part of your life ‘in the closet’, that seems uncomfortably familiar.

As UNIT stories go, the differing international settings gave it far more of a sense of scope than all those alien invasions of the 70s which seemed intent on conquering the Home Counties. Despite the James Bond-esque establishing shots, I’m guessing that all the locations were the Tenerife ones used in The Magician’s Apprentice, but both New Mexico and ‘Turmezistan’ were convincingly dressed. Probably more so than London, which as usual was fairly obviously Cardiff.

I did like that idea that the Zygons had been secretly spiriting people away through those extended liftshafts though. That was imaginatively paranoid, and I wonder how many children are now going to be frightened of the lift!

The regulars were on fine form, Peter Capaldi once again plainly having the time of his life as the Doctor. He’s still playing it as the ‘ageing rocker’, complete with electric guitar version of Amazing Grace, and referring to himself as “Doctor Disco” and Doctor Funkenstein”. After his reluctance last year, this time he was happy to embrace the role of “President of the World” because he loves the idea of “gadding about in my own special plane” (though didn’t it crash after the Cybermen pulled it to bits?). You could practically see how much fun Capaldi was having as he “titivated the fronds” of the lovingly recreated organic Zygon technology.

Jenna Coleman too was good, her eventual (not entirely surprising) revelation as a Zygon duplicate giving her something different to than her usual all-competent hero role. It’s always more fun to play the baddie, and Coleman obviously embraced it; that sly look as the penny finally dropped for Jac was superb.

It also played into this year’s rather more subtle ongoing themes; in this case the blurred line between friend and enemy. Thankfully we weren’t bludgeoned over the head with ominous hints of Clara’s impending death, but we did get another reference to the “hybrid” the Doctor’s been obsessing over since Davros mentioned it. These ongoing themes are obvious, but I’m glad they’re not being allowed to dominate the episodes as so many of the story arcs did in the Matt Smith era. We’ll get a payoff, I’m sure, but for now it’s being kept nicely to the background in a way we haven’t seen since the whole “Bad Wolf” thing.

So, yes, a lot of good stuff here, some of it very thought-provoking even when the lack of subtlety felt grating. I wouldn’t consider it a classic episode by any means though – the pacing was all over the place, and it felt more like an extended setup for the next part than any of the previous two-parters this year. And after the last few weeks, the dialogue felt workmanlike rather than inspired or poetic, a definite regression.

Still, it’s miles better than Harness’ previous effort, to the extent that I was mildly surprised I didn’t come away hating it. It may be the lowest point of this year’s series so far, but given how much I’ve loved every previous ep, there’s no shame in that. And who knows, the conclusion may lift it up to that level anyway…

One thought on “Doctor Who: Series 9, Episode 7 – The Zygon Invasion”