“This is what life looks like now. We have to see it. We have to fight it. If we don’t fight, we die.”

After last week’s fascinating diversion into Morgan’s Jedi training/psychoanalysis, it was back to business as usual in this week’s Walking Dead, as we returned to the running plot of Rick’s none too successful plan to lead the Walker herd away from Alexandria, just when the Wolves attacked.  But if you found last week’s flashback frustrating for prolonging the tension of whether your favourite characters made it back alive, you must have been positively gnashing your teeth at this one. 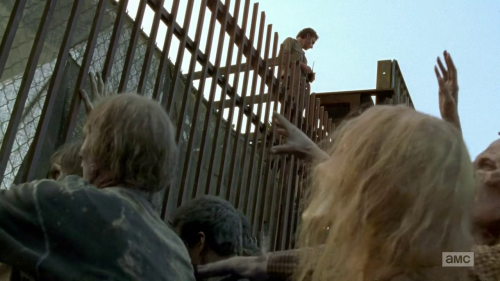 Showrunner Scott Gimple knows how to milk the tension, and if you wanted to find out what happened to Daryl, Abraham, Sasha and (especially) Glenn, you wouldn’t get answers here. Instead, we got a little breather in the plot’s recent relentless action; though no break in the tension. Alexandria is now surrounded by Walkers “twenty deep”, and what we got here was the beginning of a siege.

Corey Reed’s script did at least show us that Rick made it out of his surrounded RV as he sprinted towards the walls of Alexandria with a herd hot on his heels. While I’ve often described ‘Operation Get Them Somewhere Else’ as a failure, it was fairly pointed out that the mass of the undead slapping at the walls was only about half the size it could have been. And if it hadn’t been for the Wolves’ attack, and their Walker distracting truck horn, the whole thing probably would have worked.

With the Walkers pretty much preventing anything from actually happening inside the Safe Zone, this ep was mainly concerned with developing the characters of the Alexandrians, who have of late had the real world thrown shockingly in their faces time and again. With a lot of death to reflect on, along with a surrounding horde of hungry revenants intent on having them for lunch, it’s fair to say some of them reacted better than others.

Jessie in particular has really stepped up since her ferocious killing of the Wolf that invaded her home. It’s an interesting perspective that she, like Carol, has spent years sublimating her rage at marital abuse into submissiveness, and is now basically letting it all out. Of all the Alexandrians, she seems to have most thoroughly grasped the hard realities of the post-apocalypse world; and rather than sinking into despair as most of them seemed to this week, she’s actively ready to fight. Whether she’s up to it or not is another matter, mind you.

Also stepping up was Aaron, who had the good grace to pretty much instantly admit his unwitting part in leading the Wolves to their walls. It probably helped that he’d spent more time “out there” than most of them, but he was obviously beating himself up about what happened the whole way through.

This led to an interesting subplot with Maggie, who was (unsurprisingly) unwilling to accept the idea that Glenn was dead. Aaron’s eagerness to make up for what he perceived as his fault led him to accompany her on her foolhardy trip to try and find him, showing her the old sewer that led under the walls. Their scenes together effectively dissected the guilt that both felt – Aaron for dropping his pack, and Maggie for not going with Glenn on the mission. It was left interestingly ambiguous whether Aaron’s determination to press on after Maggie came to her senses was for real, or a further attempt to help both of them deal with their consciences; either way, it was a nicely played two-hander subplot, with good performances from Lauren Cohan and Ross Marquand. 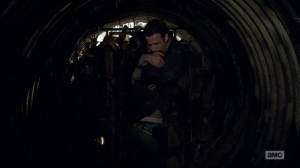 Most of the rest of the Alexandrians, though, seemed basically to be going to pieces (I’m not yet convinced by surly teenager Ron’s unlikely new maturity). They’re hardly the types to riot, but their half-hearted attempts to rob the pantry made them seem even more pathetic than they otherwise might have. And while we got an unexpected morale-boosting speech from Spencer Monroe, the script played a nice bit of misdirection there – he just wanted the rest of them out of the way so he could nick stuff himself.

Panic attack-prone Dr Denise at least managed to rouse herself from resigned despair with the realisation that reading a medical textbook might actually help her treat patients. I like Merritt Wever in the part, which already has more depth than her comic counterpart – and it was a nice surprise that she unexpectedly revealed herself to be Tara’s new love interest. I bet the ‘fans’ who moaned about Aaron and Eric’s rather chaste kiss won’t be objecting to this gay relationship.

But by far the most important character journey was Deanna’s, Tovah Feldshuh again showing some great acting chops. Deanna’s been moping passively around since the season opener, too lost in her grief over her husband and son to do anything about actually leading the community she’d founded. Of all the Alexandrians this week, she went through the most compelling character development as events drove her to a new resolve.

The ep’s opening showed her shocked, speechless, not even intervening at the attempted food-pilfering; from there she went on to frenziedly making plans for the future, then even more frenziedly attacking a stray Walker before defiantly standing before the surrounded gate and slapping back the hungry Walkers, Yes, she’s recognised how much she needs Rick; but she’s also finally recognised that he can’t lead the community without her. It’s taken her a while to find out, but it looks like she’ll be a pretty fierce fighter – if she survives. As she wrote on her plan, in a quote from Ovid: “Some day this pain will be useful to you”. 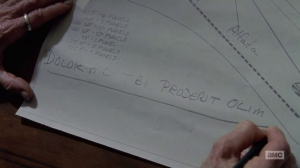 Despite the desperate situation, this was mostly a character-driven episode, and with the Walkers at least unable to get in (for now), there wasn’t much actual gore. Still, Deanna’s ferocious bottling of the undead Wolf was plenty bloody, especially since she didn’t seem entirely bothered about going for the brain – this was just her letting out all her rage:

Top gore, though, must be those disgustingly rotted Walkers Maggie and Aaron accidentally set free in the sewer. No, there wasn’t much actual blood, because these things had basically been decomposing in human waste. Even I was pretty grossed out when the struggling Maggie tried to get free of one only for it to just come apart in her hands:

Despite the lack of action, this was undeniably a tense episode – I do like a good siege. It was also important to put some more focus on the Alexandrians, even if at the expense of regulars like Michonne (barely glimpsed) and Carol (nowhere to be seen). Some of these characters are liable to with us for a while (though given this show’s style, who can tell which ones), and it’s useful to give the audience some investment in them. However, that disturbing crack in the wall at the end suggested we may be saying goodbye to some of them quite soon….

One thought on “The Walking Dead: Season 6, Episode 5 – Now”