“If you have a roof over your head… if you have food, you have walls – you have choices. And without Walkers, and bullets, and shit hitting the fan, you’re accountable for them. You’re always accountable.”

Still wondering if Glenn’s really dead? Well, I’m afraid you’ll have to wonder at least one week longer, as this week’s Walking Dead caught us up with yet another narrative strand in the gang’s long, long day. This time, we found out what happened to Abraham, Sasha and Daryl while all the other bad shit was going down back at the town; and as ever, the script (by Heather Bellson this week) gave us a satisfying balance of undead action and character development. 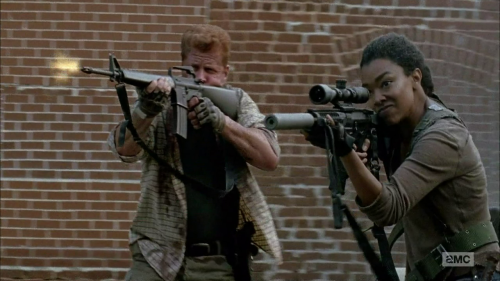 With only three of the regulars present, the script helpfully split them up to give us two separate narratives. In effect, it was like the standard A plot and B plot of so many TV shows; but where the B plot is usually lightweight and comic, this is The Walking Dead so both plots were dramatic and dark as night.

While ‘Operation Get Them Somewhere Else’ seemed to be faltering elsewhere, we’d assumed that the three patiently leading the Walker herd away from Alexandria were presumably doing all right. How very, very wrong. This is The Walking Dead, and nobody gets that lucky. So a surprise machine gun attack from unknown parties (come on, it must have been the Wolves) caused Abraham and Sasha to finally total that near-derelict Buick Roadmaster that seems to be the Alexandrians’ only vehicle, while Daryl hared off on his bike to split up the attackers.

After the initial fusillades of gunfire, Abraham and Sasha’ story was one of much soul-searching while they (quite sensibly) waited for Daryl to come back and find them. The show’s thrown them together somewhat arbitrarily till now, but this ep made it clear that Abraham is just as addled with PTSD as Sasha is, and explored how he’d managed to deal with it thus far, while she hadn’t.

Bellson’s script, and Jeffrey January’s camera direction, dwelt purposefully on Abraham’s military past to inform his character, with the discovery of that military dress uniform and the unfortunate undead soldier improbably impaled off the side of a bridge. Michael Cudlitz was as charismatically macho as ever in the part, with lines like “loose ends make my ass itch”, and his distinctly non-PC response to what made him think Sasha was interested in him: a man can tell”. 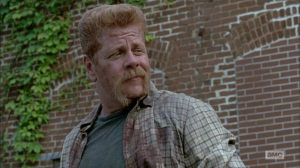 But we also got to see more depth, and self-awareness, than is typical for this kind of gung-ho soldier. Abraham, it seems, has been dealing with his PTSD by always having a mission; trouble is, now the gang are ‘happily’ settled in Alexandria, he doesn’t have one any more. No wonder he volunteered to go out on ‘Operation Get Them Somewhere Else’ so eagerly. Not to mention that it paired him off with Sasha, so he could finally reveal the simmering macho passion he has for her under his gruff soldierly exterior.

Sasha, for her part, seemed more sorted than she has done for a while. Perhaps she just needed a mission too? She seemed happy to chill out in that office, even with a very scrawny Walker pinned behind the glass door of the meeting room, while Abraham went out and worked off his excess testosterone having a fist fight with a handily impaled Walker of his own.

This strand of the narrative dwelt heavily on one of the show’s ongoing themes, of readjusting to normality (or as close to it as they’re liable to get) after ages spent “out there”. Suddenly life is about more than just staying alive from day to day; you can have affairs, tut about the neighbours, and express your frustration at not having a pasta-making machine. These guys have been so removed from that for so long that they’re still having trouble dealing with it, and this ep gave us the skinny on how these two are dealing with it. Sasha better than Abraham, it seems, though he seemed to experience some kind of catharsis while slapping a Walker who could so easily have been him.

Philosophy-chewing though all that soul-baring undoubtedly was, I have to say that Daryl got the more exciting plot this week. In one of the show’s frequent forays into the genre, everyone’s favourite redneck found himself playing the reluctant, surly hero of so many old Westerns when he encountered a desperate trio of survivors on the run from the same bad guys that attacked him (Wolves, I bet ya).

We saw all those old Western tropes play out, as the trio mistook Daryl for one of the baddies, tied him up and thumped him, only for him to escape then reluctantly come back to help them (“maybe I’m stupid too”). It fits with Daryl’s rapidly developing role as the conscience of the group, the one who still wants to bring survivors into their refuge when Rick and even Aaron no longer think it’s a good idea. Norman Reedus played it well; you could practically see his conscience needling at him till he discovered that box of insulin and realised that if he didn’t go back, somebody would die. And it would be his fault.

This plot gave us more clues as to the nature of ‘the baddies’. Are they the Wolves? Or is there worse out there? Whichever, the hapless trio were on the run from another community which, it seemed, had been taken over by a gang of psychos. Their manhunt for the escapees was terrifyingly efficient, and only Daryl managed to divert them by leading one to get bitten by a handy Walker.

It fits with the show’s bleak, nihilistic outlook that, in the end, Daryl’s compassion was very nearly his undoing. The same might have happened in one of those old Westerns too – in the end, the people you help still turn on you. Daryl was left, wandering alone in the wilderness again, like John Wayne at the end of The Searchers. Unlike the Duke though, Daryl can hotwire a truck.

The very striking setting for this part of the ep reinforced the bleakness of its outlook. The first thing Daryl saw after tumbling off his bike was a very charred Walker; as he rambled about, it became clear that the whole forest, for miles around had been burned to a crisp. The direction cleverly eked out the clues as to how this had happened, showing us a fuel truck here and there until survivor Dwight (Austin Amelio, the third ‘Austin’ in the cast so far) revealed that he and his friends had torched the place to rid it of Walkers.

As Walking Dead eps go, this one had a happy ending. Abraham and Sasha’s confidence in Daryl’s tracking skills paid off, and he found them as predicted. Driving a truck that’s presumably full of priceless fuel, no less. And if you’re still wondering about Glenn (I know I am), that tremulous voice on the radio saying “help” might have given you some hope…

Actually this ep wasn’t all that gory. Oh, it wasn’t gore-free; there was a standard issue throat ripping, an arm amputation and that rocket-launcher wielding Walker sliding messily off that fence post. But what the ep did have was some of the most inventive Walkers for a long while. This season has really been pushing the envelope in how decomposed they can get without actually falling apart; but this ep went the extra mile.

So, there was the charred-to-a-crisp biker (melted helmet still on) encountered by Daryl: 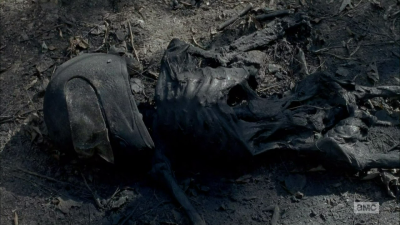 Who also ran afoul of a Walker who seemed to be growing moss all over him to look like Swamp Thing:

While Sasha relaxed next to that scrawny and sad one, whose scrawled last words told the melancholy tale of how he’d got there:

Abraham had a special moment with the army Walker who got himself both impaled on a fence post and hanging off a bridge – I’ve rewatched that scene a couple of times and still can’t figure out how it got there:

But top marks must go to the pair of unfortunate souls who’d found themselves encased in melted glass from their greenhouse after Dwight’s conflagration – and still couldn’t stop twitching:

Satisfying though this was, especially for Daryl fans, it wasn’t a standout ep (so far that honour belongs to Here’s Not Here). But it advanced the plot a bit, and contributed to the ever more complex set of narratives in a very small time frame. This season has been really inventive in its use of time – occasional flashbacks aside, we’re now up to episode 6 and the story is still taking place on the same day. The furthest the narrative has got was last week, where we at least saw it get dark. I’m betting the day won’t end until the mid-season break; it’s an audacious and interesting way to approach an entire eight episode run of a show!

One thought on “The Walking Dead: Season 6, Episode 6 – Always Accountable”