“There’s no nice way to say you’re going to die.”

Trouble is, Moffat’s got form at this sort of thing, which rather undercut a potentially hugely dramatic moment if you’ve been watching the show all the way through his run. How many times did Amy Pond die? Well, not as many as Rory, whose constant deaths actually became a running gag. And Clara herself has been seen to ‘die’ at least twice already, in Asylum of the Daleks and The Snowmen. So, despite this being painted as a final, ‘real’ death, it’s hard to shake off the suspicion that some timey-wimey technobabble will see her restored to life.

But, if you take this episode in its own right, without thinking of Moffat’s prior tendency to portray death as always reversible, it was an interesting bolt out of the blue for Clara’s long-telegraphed death to suddenly occur in what seemed, initially, like a fairly standalone ‘filler’ episode. Apparently the BBC PR department were as cack-handed as usual in effectively letting the cat out of the bag in the ep’s pre-publicity, but thankfully I’d somehow managed to avoid all of that. Nonetheless, there were definite hints from the start here in Sarah Bollard’s script that Clara’s established desire to ‘be the Doctor’, along with her increasingly self-destructive seeming thrill seeking, was getting out of control.

That said, there was more to this inventive episode than Clara’s inevitable death. Much has been made of the ‘trap street’ resembling Harry Potter’s Diagon Alley, but for me it called to mind the more interesting ‘hidden Londons’ frequently seen in DC Comics’ Sandman and Hellblazer, with all the playing on English mythology cleverly wrapped up in sci-fi trappings. Make no mistake though, Sontarans and Cybermen notwithstanding, this was not a science fiction story. It was about magic. And unlike the technobabble used to excuse ‘magic’ in previous episodes, it wore that fact proudly on its sleeve.

Ok, yes, maybe the ‘Quantum Shade’ was a tad technobabbly for what was, in essence, a demon (it even appeared as black smoke like the demons in Supernatural). But there was no handwaving away Ashildr/Me’s statement that she had “promised it a soul”. 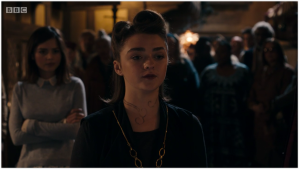 I had expected ‘Me’ to be returning, so it wasn’t entirely a surprise to see her striding onto the scene as the trap street’s ‘Mayor’. I know a lot of fans who still don’t really rate Maisie Williams in the role, and if I’m honest I was less impressed with her here than the last time. But that was no fault of the actor – more to do with how the script had developed her character. Previously she had been shown almost as a ‘conscience’ for the Doctor; here she was actively opposing him. Mind you, it did fit with what we’d previously established that she thought she was doing it for ‘the greater good’.

Also back was Joivan Wade’s Rigsy, from last year’s Flatline, and he was as engaging and likeable as before. In a real sense, he was the audience’s eyes in this strange world, an everyman caught up in events beyond his ken; even after the 2-D ‘Boneless’ he couldn’t have been prepared for a veritable menagerie of alien creatures. In a canny move that accentuated the strangeness and saved on the budget, for the most part the aliens seemed to be no more than ordinary human beings; this also meant that the actors’ faces were visible, giving better performance opportunities than if they were hidden under prosthetics or masks. Simon Paisley Day particularly impressed as the snarling Rump, an intimidating but somehow cool presence.

The design of the ‘trap street’ was deliberately Dickensian, though the Harry Potter influence was also clear. Again, the script made a virtue of this misdirection, in that those atmospheric gas lamps actually contained the creatures projecting the illusions. There were a lot of interesting concepts here, not least the Janus, on whom the plot hinged. Named after the two-faced Roman god of the New Year, they were effectively visualised with an identical face both on the front and back of their heads; though again, this called to mind Harry Potter’s unfortunate, Voldemort-possessed Professor Quirrell. 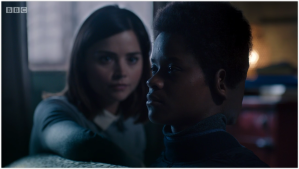 Sarah Bollard is new to the show, and one of very few female writers ever to have written for it – on the strength of this, I wouldn’t mind seeing her back. But she had an uphill struggle against the demands of this year’s overall plot in front of her, and for the most part dealt with it well. I hadn’t expected this to be the first instalment of a three-parter, something the new show has only done once before. Steven Moffat takes over the reins for the next two parts, so it’ll be interesting to see whether the tone suddenly varies wildly from here.

The most obvious plot element handed down from above was of course the death of Clara. Given the plot significance of that, Bollard’s script devoted a hefty chunk of the ep to it, with a lengthy scene in which Clara first learned of her impending, inescapable death, came to terms with it, and helped the Doctor deal with the grief that was to come.

That’s a rapid progression through the normal reaction to a death sentence, but then we’ve already established that Clara Oswald is no ordinary woman. She probably came closer than any of her predecessors in her attempts to emulate the Doctor; but her ultimate hubris in ‘taking it too far’ was telegraphed very early on with her glee at being dangled precariously out of the TARDIS in the London skies. 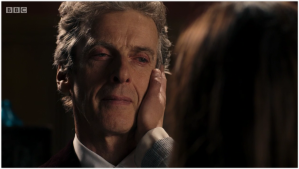 Her final (?) scene with the Doctor was beautifully written and played, with Jenna Coleman and Peter Capaldi on top form. And yet, despite some very sincere and emotional performances, it left me curiously unmoved, and I’ve been trying to work out why since I saw it. I think for me the problem is that Clara has never grown on me, mostly because she’s never been very consistent as a character. In her first series, she was more plot puzzle than person, but last year gave her an interesting reinvention as a manipulative ‘control freak’. Trouble was, that also made her far less likeable. So this year she (like the Doctor) was softened to dial down that aspect of her personality, leaving her with little more than her adrenaline addiction and desire to emulate her mentor.

All those different ‘versions’ of Clara made her harder to get a handle on than the likes of Amy Pond or even Rose Tyler. Great though Jenna Coleman has been in the part, I’ve found it hard to get attached to her because of that inconsistency. Consequently, while Murray Gold’s standard-issue tear-jerking strings swept majestically onto the soundtrack as Clara went bravely to face her death, I (like many of my friends straight and gay) found myself more fascinated by Coleman’s bouncing boobs in that unwisely-chosen sweater. “Something for the dads”, I suppose, though I’d have thought we’d moved on from that kind of thing by now!

Still, if Clara’s death was less moving than it could have been, the Doctor’s reaction was perfect, his anger and grief beautifully underplayed by Capaldi. Particularly chilling was his quiet warning to Me – “I strongly advise you to keep out of my way. You’ll find it’s a very small universe when I’m angry with you”. It was also nice to finally see him don the new, maroon velvet coat we’ve been seeing pictures of, part-Pertwee and part Tom Baker in style.

As the first of a three-parter, it’s a bit hard to assess this episode in its own right. It had a lot of baggage to carry, but it’s fair to say that Sarah Bollard came up with plenty of interesting ideas – and some great dialogue – outside of that. If Clara’s death was less affecting than it should have been, I’d say the blame lies more with Steven Moffat than with her; after all, based on past form, we know that with a bit of timey-wimey handwaving she could be back in a minute if he wanted her to be.  If Clara truly is dead, it’s not because of Me, or the Doctor, or her own hubris; it’s because Steven Moffat says she is. 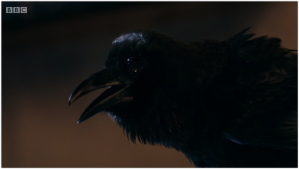 Next week, it’s on to the season finale proper, with Moffat himself back on writing duties and, presumably, the reveal of who precisely Me did a deal with to capture the Doctor. Is is Missy? Is it the Daleks? Or something more interesting and less predictable? Next week also has the novel idea of an episode not only without a companion, but with seemingly no other characters at all. If anyone can pull that off, it’s Peter Capaldi. But can Steven Moffat?