“You wanna live, you take chances. That’s how it is.”

After the tumultuous events of the last couple of weeks, this week’s Walking Dead was one of those “take a breather” eps so common before the Stonking Big Finale. Not filler exactly, as there was plenty of character development and groundwork laid for plots to come; nevertheless, it was an uneven episode. There was plenty of good stuff here, but it all hinged on an unlikely display of stupidity by our veteran survivors as they chose the worst possible time to go on two inadvisable foraging trips with two comparative rookies.

This was one of those A Plot/B Plot episodes, neatly bookended by two mirrored montages at either end which mainly served to advance Carol’s current character arc. Melissa McBride wasn’t in this ep apart from those sequences, but it was clear that all the events played into Carol’s current mindset. At the start, she seemed hopeful that Daryl hadn’t killed Dwight way back in Always Accountable, only to be confronted with his, as ever, pragmatic response – “I should have”. And the events of the ep forced her to conclude he was absolutely right.

Matthew Negrete’s script felt oddly paced; at first it seemed like one of those sombre, melancholic eps in which the characters walk slowly through the ruined world and ruminate on what they’d lost, then a sudden jarring burst of violence totally switched the mood. I’m undecided as to whether that sudden shift in tone was intentional, though presumably director Alrick Riley wanted to play it that way. It did seem a little forced, though.

As was the unfathomable agreement of Daryl and Rosita to accompany Dr Denise on a speculative drugs gathering trip with an impending major attack looming on the horizon. Rick (barely seen this week) plainly doesn’t believe all the Saviors are dead, hence the fortifications of Alexandria and the especially watchful gaze of Sasha. Under those circumstances, it’s not especially believable that Daryl and Rosita would agree to the trip. Even when Denise insisted she’d go on her own if they didn’t, surely one or other of them would have gone to Rick and had Denise talked out of it?

But no, that wasn’t even tried. You had to get past the basic implausibility of that premise to enjoy the rest, which to be fair was pretty good. On her last hurrah as Denise, Merritt Wever was as sympathetic as usual, and it came as no surprise when she ultimately revealed the whole thing had been some kind of morale-boosting plan for Daryl and Rosita. Norman Reedus was as good as ever, but sadly Christian Serratos still doesn’t have much to work with as Rosita, who this week had taken to casual rebound sex with Spencer. It seems she’s still being pretty much defined by her relationship (or lack of it) with Abraham; despite being around for nearly two seasons now, she still seems paper-thin as a character. 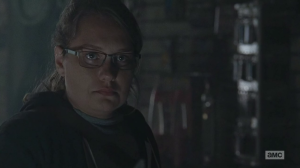 Of the two, their trip was the more sombre, as Denise was reminded of her presumably dead brother and was confronted with the horrors outside in a way she surely wasn’t prepared for. Encountering a Walker (in name, anyway) who’d died in a plaster cast, her discovery of a cot and the repeated scrawled word “HUSH” on the wall led her to the disturbing discovery (still only implied) that the man had drowned his baby before dying himself. 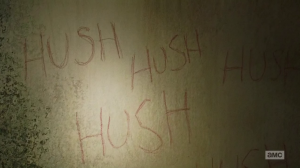 That was pretty gruesome, though I found myself a little disappointed that Denise wasn’t actually confronted with an undead baby. That would be pretty extreme even for this show, though; to the best of my knowledge only the 2004 remake of Dawn of the Dead has gone to that length. As it is, Walking Dead rarely even shows child Walkers, reserving them for moments of big emotional impact.

It has to be said, Daryl was absolutely right in his assessment of Denise’s recklessness, however vehement her protestations; which only served to reinforce how unlikely it was that he’d let her go out in the first place. Still, despite her fate-tempting line, “I should have told Tara I loved her”, I was still fairly surprised to find her killed off. If anything, I’d been expecting Rosita to go, but in hindsight the ep focused so much on Denise as a character that I should have guessed. That’s what always happens when the show suddenly puts a lot of focus on one, previously peripheral, character –remember T-Dog’s last ep? It was a heck of a good death, though – halfway through one word of a heartfelt speech, that she carried on with unaware that she was already virtually dead.

It also gave Daryl a reason to agonise plenty, as it was his own crossbow that killed her. It was a nice bit of continuity two weeks ago, when Primo emerged from Savior HQ on Daryl’s stolen bike; now he was faced with the other consequence of his previous actions, in the shape of the now-badly scarred Dwight, the man who agreed he should have killed. It’s now clear that Dwight is the TV equivalent of Negan’s chief henchman in the comics, one side of his face burned off as a result of his ‘crimes’ against Negan. After the events of this week, he may also be down some portion of his genitals too, which is unlikely to endear Eugene to him. Nice to see another memorable moment from the comic brought to life!

Of the two, Abraham and Eugene’s trip outside the walls of Alexandria was slightly more believable; or would have been had Eugene actually told anyone what he was doing before they went. The idea of making their own ammunition, even using it as currency, is a very good one, and again straight from the comics.

With Denise mournfully recalling her dead brother and confronted with a drowned baby, Abraham and Eugene’s comedy buddy partnership came as something of a light relief. Josh McDermitt has the semi-autistic Eugene’s character down pat, hilariously failing to recognize that he’s annoying the hell out of his compadre; equally, Michael Cudlitz as Abraham played off him brilliantly as a slightly parodic ‘man’s man’ confronted with a wannabe. It has to be said, I couldn’t resist a laugh at Eugene’s unfortunate choice of target when trying to demonstrate his newly-acquired Walker killing skills; it was blackly comic that the creature’s head was actually reinforced with spilled,, hardened metal from the smelting works!

In the end though, it was actually rather affecting the way each man came to recognize the merits and skills of the other – the trad bonding in every mismatched buddy comedy. Although given his recent decision to leave Alexandria, along with his profound appeal to Sasha this week, I have to wonder how long Abraham has got in the show…

I, however, find it pretty unlikely that we’ve seen the last of Carol, despite the pathos of that narrated farewell note at the end. It seems clear that the recent return of her tormented conscience stems from her philosophical conflict with Morgan; they spent the opening montage watching each other, then the closing montage found him staring mournfully at her empty chair like a man who’s won an argument that gives him no pleasure. For his part, he’s still reluctant to kill; he spent the week building a jail cell that will be very familiar to comic readers, so that “next time, you’ll have another choice”.

Given its (mostly) sedate pace and character development, this was actually a surprisingly gory week. Early on we saw an unfortunate Walker impaled through the cheek on one of Alexandria’s defensive spikes: 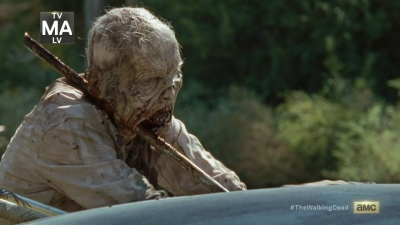 Then there was the blackly comic spectacle of Eugene’s intended victim, his rotting head gleaming with reinforced steel like a sort of undead Terminator:

Though best Walker of the week must have been the one that couldn’t walk at all – the incredibly rotted, jawless thing Denise found banging its cast hopelessly against the pharmacy wall: 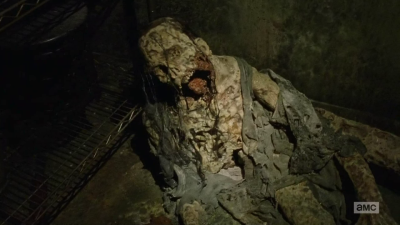 This was an uneven ep – there was a lot to like, but the sheer implausibility of its central premise was a lot to get past. Still, Denise’s death and Carol’s (apparent) departure gave it a lot of pathos, and there were some good mood moments along with some surprisingly broad comedy from Eugene and Abraham. I doubt this one will go down as a classic, but as a pause before the Big Finale, it worked reasonably well.