“It’s mob rule on land. What makes you think it’s any different out here?” 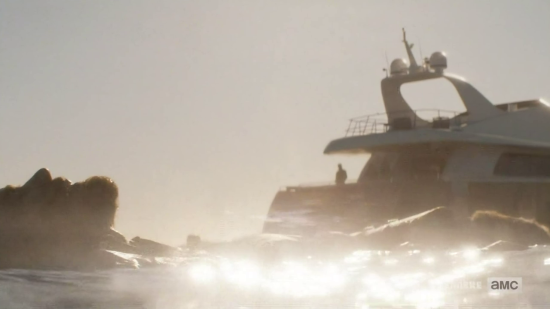 After a storming season finale for AMC’s ratings behemoth The Walking Dead, the long wait for resolution to that controversial cliffhanger ending is now being filled by the return of previously lacklustre spinoff Fear the Walking Dead. Fear’s first season was mediocre at best, seemingly taking an age to reach the point of its zombie apocalypse, then avoiding showing us any of the actual detail in favour of following a group of unlikeable characters in a military quarantine. It was (eventually) interesting enough, but felt like a missed opportunity. 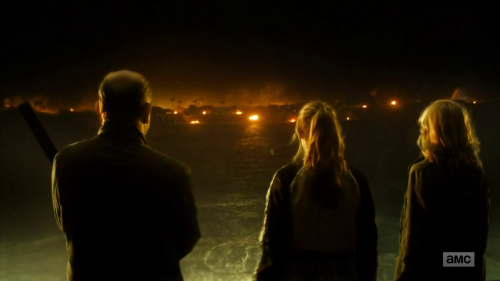 The cheesy title hardly helps. As a prequel to The Walking Dead, wouldn’t something like The Rising Dead have been rather more effective? Oh, but then it wouldn’t have had that all-important Walking Dead branding. And not only does the very title smack of a cynical money-making exercise, the fact that civilisation had collapsed by the end of season 1 made me question the need for what would surely just become a variant of the parent show with nicer weather and fresher corpses – Walking Dead: LA, if you will.

Still, AMC had already greenlit this 15 ep second season before the pilot even aired. The similarity to season two of its then struggling parent show is inescapable – that too went from a six ep beginning to twice as many eps for half as much money, giving us the interminable arguments on Hershel’s dreary farm that almost made me stop watching.

Still, it felt like the writers here were trying to give the show some much-needed vitality and individuality. The fiery, explosion-packed cold open was more exciting than anything in the slow-paced previous season. And it was followed by a very different perspective on the zombie apocalypse than its parent show – armageddon on the ocean wave, as our heroes took refuge on the amoral Strand’s extremely luxurious yacht. 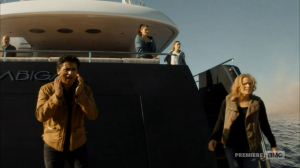 We’re unlikely to see Rick Grimes and co setting sail from the backwoods of Georgia any time soon, so this did feel like the spinoff was genuinely trying to do something a bit different. It makes sense, too; taking to the ocean is a sensible move in the circumstances, as Max Brooks depicted in World War Z. Unfortunately, while Strand (the excellent Colman Domingo) already seems to have figured out the need for pragmatic amorality for survival, the rest of the wet blankets we’ve been following since last season still haven’t moved beyond the mores of pre-apocalypse morality.

While that frequently makes me want to thump them for their stupidity, it’s an understandable (and believeable) failing this early on in the situation. After all, it took Rick a few seasons to evolve from “we don’t kill the living” to tearing a man’s throat out with his teeth.

Trouble is, we’ve already seen one group of survivors go through that evolution, so this spinoff’s going to have to go the extra mile to justify its existence. Lead character Maddie (Kim Dickens) already showed herself last time to be better suited to the situation than her milquetoast fiance Travis (Cliff Curtis). This ep showed recovering junkie Nick well on the way to equalling her – and pleasingly for me, still taking his shirt off at the slightest of excuses. Nick was fundamentally unlikeable last season (believable for an unrepentant junkie), but Frank Dillane is better eye candy than any guy in the parent show except perhaps Glenn. 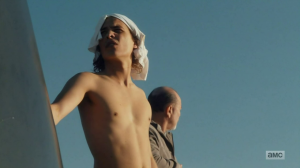 However, his redemption as a human being comes with the strings of heroism that is, under the circumstances, idiotic. Plunging into a zombie-infested ocean to try and rescue the unlikely survivors of a shipwreck was a dumb move, however laudable. Particularly since he’d already bought into Strand’s cold but rational decision to pass up a boatload of desperate survivors early on.

Still, waterborne zombies (this show doesn’t use the Z word, but has yet to come up with an equivalent like “Walkers”) are an interesting idea the parent show has only touched upon. They may not have the wit to swim, but since they don’t need to breathe, that’s hardly a problem for them. Director Adam Davidson was one of the show’s better assets last year, and he made the most of the possibilities of an ocean filled with floating ghouls in a good set piece. 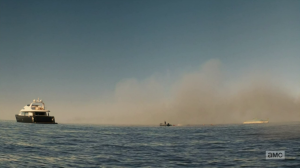 As with the parent show, though, the hungry dead are merely a normal hazard of this new world; the real danger comes from the crafty and self-obsessed living. Hence, still-naïve teen Alicia (Alycia Debnam-Carey) spent the ep building a radio relationship with a Bowie-loving survivor on another boat, who obviously (to everyone except her) was going to come looking for their well-equipped refuge once he’d triangulated the radio signal from their lengthy conversations.

Plotwise, that was about it for this new season opener, which despite some interesting wrinkles still felt pretty slow. The jeopardy of being safe on the ocean but with dwindling supplies and no idea where to dock was interesting, but showrunner Dave Erickson’s script mostly focuses on the roster of characters. Trouble is, they’re mostly unlikeable, stupid,or both. 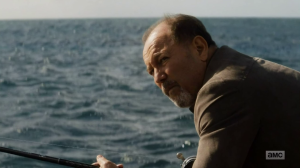 Travis (Cliff Curtis) spent the whole thing preoccupied with his rebellious teenage son Chris (Lorenzo Henrie), who continues to be the show’s most irritating character. I mean come on, the world is ending – man up and stop acting like a spoiled brat! Meanwhile, the show’s most interesting character, former Salvadorian torturer Daniel Salazar (the excellent Rubén Blades) was rather sidelined, serving mainly to offer cynical snipes from the sidelines to those less well-suited for survival.

I actually didn’t carry over this bit of my Walking Dead blogposts after ep1 of this spinoff – it’s simply not that gory a show, despite the premise. Still, this week does deserve at least a nod for Nick’s extremely graphic use of an outboard motor to shave off the face of an attacking ghoul in the cold open: 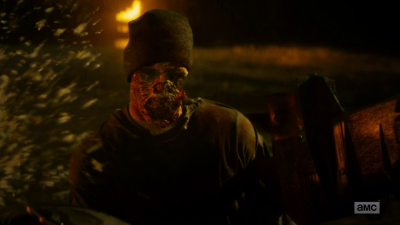 While still undecided about the need for a Walking Dead spinoff (besides AMC’s desire for profit), I did think this new season opener showed a marked improvement from the often slow and dull first season. The seaborne setting exploited an aspect of the zombie apocalypse the parent show couldn’t do, and the characters do appear (gradually) to be becoming less annoyingly stupid at dealing with the situation. There’s potential here, to be sure, though whether it’s properly exploited remains to be seen. Like a true obsessive completist, I’ll continue to watch – and I gather AMC have already greenlit a third season. Let’s hope it’s more than just a cynical exercise in maximising profit from an unexpected hit.