“What if it’s the last day on Earth for you? Or for someone you love?”

To get the big one out of the way early, we finally met Negan, after being teased with Jeffrey Dean Morgan’s casting since the show returned in February. I gather Morgan sometimes plays nice guys, but if so, I’ve not seen any. The nicest he got was as Sam and Dean Winchester’s dad on Supernatural, and even that wasn’t very nice. Conversely, in the mixed bag that was the Watchmen movie, his terrifyingly exuberant Comedian was one of the most memorable aspects.

Well, Negan’s worse. After a truly superbly paced escalation of tension, courtesy of a well-constructed script from showrunner Scott Gimple and Matthew Negrete, and some typically superb direction from Greg Nicotero, our gang finally came face to face with the baddie, like the end of level boss in a video game. Only with a baseball bat wrapped in barbed wire.

Yes, comics fans will be pleased to see Negan’s trusty and prized weapon Lucille faithfully recreated here. And Morgan certainly looks the part, in his black biker jacket – albeit a little stubblier than the original: 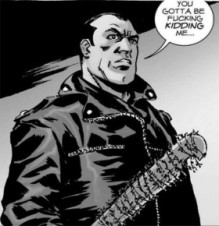 And despite the limitations of being broadcast on basic cable, he came pretty close to sounding the part too. Comics fans will remember his inventive and near-ceaseless use of the word ‘fuck’, like a post-apocalyptic Malcolm Tucker. But you can’t usually say that word on AMC (Mad Men got away with it once). I’ve even read interviews with the cast in which they stated that there’s a quota of times they can use the word ‘shit’ in an episode. If that’s the case, I’m pretty sure Negan used the whole lot in the ten minutes or so he was onscreen.

It was pretty obvious from the start that we were going to lose a main character this week, and the script cleverly played with that throughout. People kept saying things to each other that, in this show, usually guarantee your impending doom; like Sasha and Abraham talking about having a baby, or Eugene bravely volunteering to go on a diversionary mission with the RV. But the clincher must have been the increasingly desperate Rick’s frantic reassurance of Maggie that, “just as long as it’s all of us, we can do anything”. That’s a surefire way of guaranteeing that “all of us” aren’t going to make it through this. 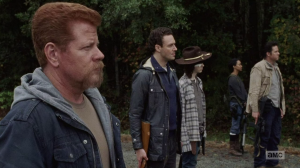 But it’s a TV show at the peak of its game that can pull the bait and switch Gimple and co got away with here. The ep milked the tension for all it was worth as Negan went through the theatrics we all remember from the comic; then Nicotero cunningly showed us the gruesome death from the perspective of the victim before cutting to the credits. Which meant that, even though we know a main character died, we don’t know which one it was!

OK, if you’re a comics reader you’ll remember who it was there (don’t mention it in any comments you may leave, please). But you’ll also know that the show has a habit of taking scenarios familiar from the comic in new and unexpected directions. All bets are off, and here it could be any of them – longstanding main characters all (except maybe Aaron). All we know for certain is that somebody’s dead; there’s no guarantee it’s who comic fans might expect. That’s a cliffhanger and a half. 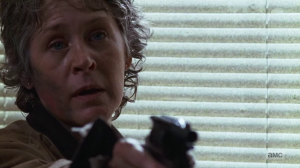 Stepping aside from Negan for a bit, this extra-length ep also gave us a thoughtful B Plot as Morgan continued to track the lost (in more ways than one) Carol, who’s now clearly looking for a way to die. As might be expected, the quiet scenes when he finally found her were electric, Melissa McBride and Lennie James giving it their all.

These two characters’ conflicting philosophies have become inextricably intertwined since they met; this was a turning point for both of them. Morgan’s entreaties to return firmly rejected, McBride was incredibly powerful as she summed up where Carol is now: “if you care about anyone there’s a price, Morgan, and you’re going to pay it. I have. And I can’t any more”.

That mantra of “I can’t any more” seems increasingly popular with the characters. Has Alexandria really turned them soft, just in time to encounter one of the most fearsome threats yet? Morgan at least finally overcame his distaste for killing, all for the sake of Carol. As he gunned down that wounded Savior, firing far more bullets than was strictly necessary, the expression on Lennie James’ face was truly revealing; this was something Morgan had been bottling up for a long time. Who knows what will happen now he’s let it out? 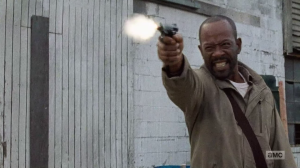 The other recurring phrase this ep came from that genially brutal Savior who was surely meant to tease audiences with the possibility that he might be Negan – “carry on, you’ll get where you’re going”. Contrast that with the show’s oft-repeated mantra (derided here by Carol) that anyone can “make it back”.

It’s now become clear that all the (in some cases contrived) events of the last few eps have been all about getting this specific group of characters where they’re going –  and it’s not back to who they were. We might have thought Rick and co were drifting dangerously close to being ‘the baddies’ before; they’re going to have to step that up a notch if they have any hope of beating the brutal, grinning madman (and his private army) they’re now faced with.

This was so tense purely as a result of the living people in it, any amount of gore might have gone unnoticed by me. Nevertheless, with effects guru Nicotero behind the camera, there were some memorable moments. There was Carol’s frantic despatch of a Walker with her usual knife to the head, but this time she practically pulled all the skin off its head to get to its skull: 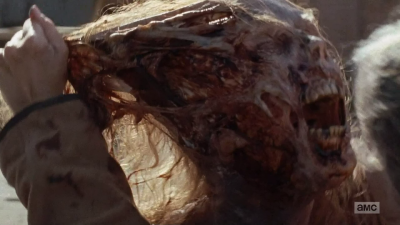 Then there was the silhouetted Walker with the unfortunate tree attachment:

And who could forget the Saviors’ inventive Walker roadblock/message, with the sturdy chain actually running through the middle of each moaning corpse? Not to mention Rick’s equally inventive way through it, which inevitably (presumably intentionally) recalled his recent trauma when he had to hack off his dying girlfriend’s hand: 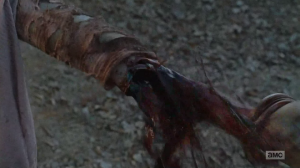 Paradoxically though, possibly the most upsetting gore was also the least shown onscreen, as Negan pounded relentlessly way at the head of his as-yet unknown victim after the tensest round of ‘eeny meeny’ imaginable. I’ve never really wondered what it would look and sound like to have your head bashed in by a barbed-wire-wrapped baseball bat, but Nicotero made it real with wince-making aplomb.

If you were worried that the group’s cosy, seemingly secure new home was going to put the show on a route to drearily agricultural post-apocalypse soap opera, this superb finale should have divested you of that opinion. In the comics, Negan is the only antagonist to prove as memorable as the late Governor, surpassing him even. The Governor was a canny politician, keeping his people in duplicitous ignorance of his dirty work. Negan, though, is an even cannier warlord who’s trained all his people into fanatical warriors. And unlike the Governor, he’s just sane enough not to repeatedly kill them himself.

Next week, the previously lacklustre spinoff Walking Dead: LA Fear the Walking Dead returns; let’s hope it’s rather better this year. But it’s going to have a hard slog keeping our minds off its parent show’s cliffhanger – I’m betting I’m not the only one waiting with bated breath for its October return.