“Either your heart’s beating or it isn’t. Your loved ones’ hearts are beating or they aren’t.”

And so, a generally low-key half-season has come to an equally low-key climax. OK, it’s fair to say that you wouldn’t usually describe a mid-season finale in which one of the main characters is gutted by a smiling psychopath while playing pool in the street “low-key”, but this is The Walking Dead. Anything less than a massive battle, a huge explosion or a vast horde of hungry corpses seems a bit anticlimactic. 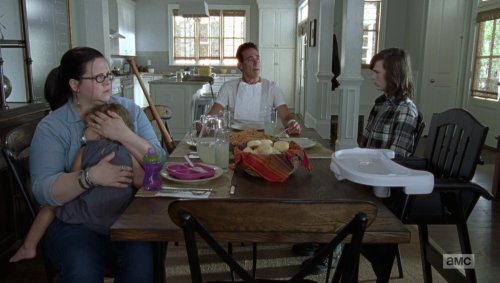 It’s obviously an intentional choice on the part of showrunner Scott Gimple to take the show in this slow-burn direction this season; how well it works is probably a matter of taste. As I said previously, each of the episodes taken in isolation were moderate to good, but the cumulative effect has been a little draggy. Not Season 2/Hershel’s farm draggy, but still a slowdown from previous years.

Still, as a mid-season finale this ep was again…tense but slow. The surprisingly frequent extended running times of the eps this season have generally been unnecessary, and this was another such – it didn’t really have either the plot or the character heft to support more than the usual 44 minutes or so.

It did at least widen the scope, giving us, at the very least, snapshots of what’s going on in every community we’ve seen so far save Oceanside. We also caught up with some characters we’ve barely seen so far this season, notably Carol and Morgan – presumably Melissa McBride and Lennie James are enjoying the lighter workload this year 🙂

Nevertheless, their extended scene with Ezekiel’s weary lieutenant was crucial to the overall theme of the ep – is it better to die on your feet, or live on your knees? Personally, I’ve always favoured living on my knees while scheming how best not to die when I get to my feet, but that would make for a similarly draggy second half of the season. Thankfully, after much deliberation, the outcome of the ep was that everyone had Finally Had Enough, and made the decision to band together and fight.

It was notable that, after starting the season with the deaths of two beloved main characters, this mid-season finale merely offed one background one and one outright pain in the ass. Let’s face it, nobody’s likely to shed too many tears over the loss of Olivia and Spencer. The latter in particular has been coming across as a particularly spineless individual of late, reminiscent of Carl’s teenage rival Ron last year. And Ron at least had the excuse of being a teenager.

In fact, brutal though it was, Negan’s killing of the petulant Spencer was more than a little reminiscent of Ron’s death at the hands (and katana) of Michonne last year. Yet again, the show’s blurring the lines between the good guys and the bad guys. Negan is still, very definitely, a bad guy, but this ep expanded on the twisted code of honour we’ve been beginning to see. Negan may know that Rick doesn’t like him, but he respects that Rick does his bidding anyway to keep the Alexandrians safe. Compared to that, Spencer’s attempt at sucking up to him probably came across as pretty treacherous behaviour. And Negan doesn’t like that.

He also doesn’t like bullet damage to his beloved Lucille, in one of the more tense scenes Matthew Negrete and Channing Powell’s script had to offer. That was a crucial scene in the development of both Rosita and Eugene, expanding on last week; Rosita finally unable to contain her anger, and Eugene having the guts to admit to Negan that he’d made the bullet, just to stop any more killing. As in the comics, Eugene’s growing into a character worthy of some respect.

And Rosita is at least getting something in the way of motivation, in the wake of her beloved Abraham’s death. The scene with her and Father Gabriel was an impressive example of getting points across without actually saying them, as was her wordless peacemaking nod to love rival Sasha at the end of the episode. It’s good to see Christian Serratos actually getting something to do, acting-wise. And Seth Gilliam’s doing pretty well as Gabriel too, now he’s over his post-traumatic stress – Negan would do well not to take this man of God at his mild-mannered face value.

Negan too is getting at least a little character development, Jeffrey Dean Morgan sporting a newly clean cut, shaved look as he chewed the scenery this week. He’s still pretty broadbrush as a character compared to the regulars, but nowhere near as 2D as the slimy Gregory. A shame the writers can’t come up with more subtle material for Xander Berkeley, who excels at this sort of thing.

This may have been a languorously paced, character-driven episode, but it still found time to cram in some of the usual crowd-pleasing grue. The soggy Walkers flailing about in that lake made for a cool bit of horror action, though why Rick and Aaron didn’t consider taking a bucket to bail out that colander of a boat is best not considered.

But of course the gore highlight had to be Negan’s disembowelling of Spencer, in the street for all to see. Like his brother before him, Spencer turned out to be enough of a douchebag that there was a certain amount of dark satisfaction in watching his horrific death:

Not much of a climax then, to a half-season that began with that storming premiere and has felt a bit like it’s coasting since. Presumably the viewer is meant to find the reunion of so many of the regulars, and their resolve to fight, a rousing climax; but since it felt like a foregone conclusion that they’d reach the decision from the very first, it wasn’t much of one. I’m hoping (and actually, pretty much expecting) that things will get a lot more lively when the show returns in February. Still, it’s a bit of a risk to trade on your audience’s anticipation without actually paying it off.