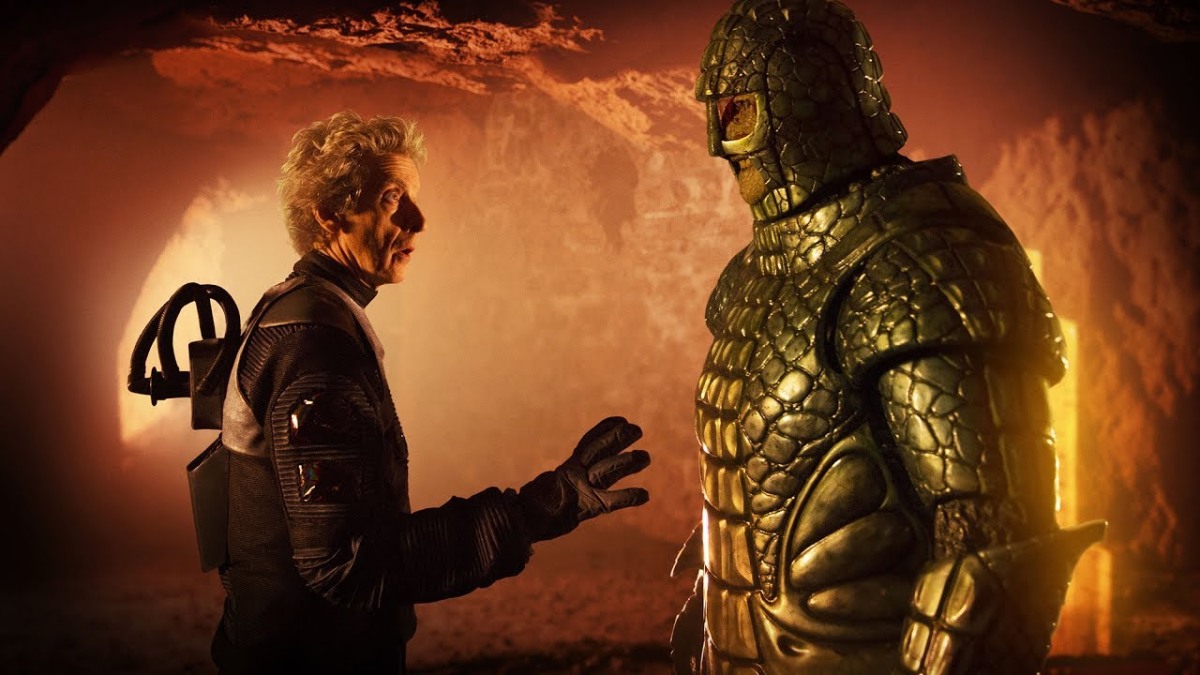 Well that was exciting, wasn’t it? A thrilling roller coaster ride in which a reptilian Ice Queen’s hard-hearted ambitions were thwarted by a selfless, mild-mannered man appealing to a sense of honour and justice. But enough about the General Election, there was an episode of Doctor Who on too (b’doom tish). 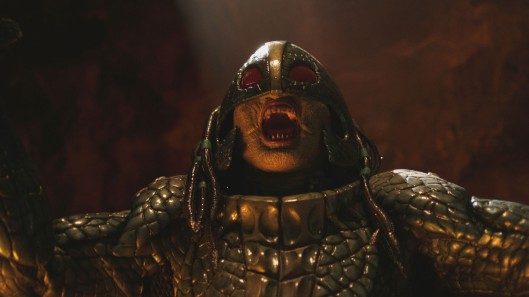 I’ve always liked the Ice Warriors, probably the first Doctor Who ‘monster’ to be portrayed with a culture of their own, capable (like humanity) of being the bad guys or the good guys. Mark Gatiss, a writer whose catalogue of Who stories has been patchy at best (Victory of the Daleks, anyone?) brought them back a few years back with the interesting albeit not entirely successful Cold War; now he gets a second shot at them with Empress of Mars. And you know what? It wasn’t half bad.

I’ve always liked the steampunk idea of ‘the British Empire IN SPACE!’, with all the inherent examination that offers of our frequently unsavoury colonial past. But in truth, this ep probably owed less to steampunk than to the original science fiction of the era in which it was set. The design, especially of the Brits’ spacesuits and the brass-instrumented ‘Gargantua’ was full of shades of Jules Verne; but the overall tone, despite the Martian rather than lunar setting, was HG Wells’ First Men in the Moon. Which, not coincidentally, had a great BBC3 adaptation a few years back, by one Mark Gatiss. 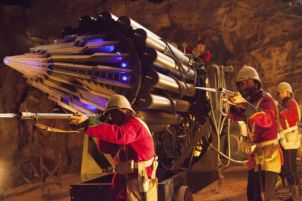 Mark’s Who  stories have worked best when they played to his strengths, notably the tongue-in-cheek , League of Gentlemen-style Crimson Horror.  Victorian sci-fi is plainly one of his loves too, so what we got with Empress of Mars felt like not just a trad Who story but an affectionate homage to the writers of the era.  There was plenty of Wells and Verne here, but also, in the depiction of the 19th century colonial British army, Rudyard Kipling too. Not so much the native-patronising Kipling of Gunga Din, more the tragic British hubris of The Man Who Would Be King; a hubris also touched on by HG himself in The War of the Worlds. Which, lest we forget, involved the arrogant, complacent British Empire being effortlessly routed by Martians.

That hubris was much on display here, with a well-drawn set of British soldiers faced with the unlikely problem of being marooned on Mars (their ‘pet’ Martian being nicknamed ‘Friday’ was a nice touch). The effective but economical characterisation was like nothing so much as a 19th century version of Aliens, one of the few films not referenced by Bill this week; incidentally it’s a lovely touch that this frostiest of Doctors may not be familiar with The Terminator or The Thing, but he does know Frozen J And whileI’m betting he’s dismissive of Star Wars, I’m sure it was irresistible for Gatiss to give him the line, “I’ve got a bad feeling about this”… 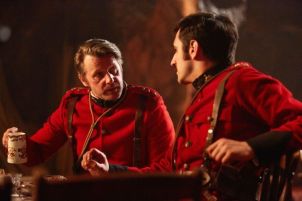 So, we got the world-weary Colonel Godsacre (a nice turn from Anthony Calf), opposed by his fanatically patriotic second in command, the arrogant (and ultimately even more cowardly) Captain Catchlove (marvellously Dickensian names). The poor enlisted men were well-represented by the no-nonsense Sergeant Major Peach, the venal Jackdaw, and the cute Vincey.

Ian Beattie, probably doomed to be typecast as baddies after his nasty turn as Ser Meryn Trant in Game of Thrones, nonetheless made the bitter Jackdaw an interesting figure, with his class-war inspired song while pillaging; Bayo Gdamamosi made a loveable figure of the innocent Vincey, who somehow managed to survive even after talking fondly of his forthcoming wedding. Mind you, while I admire the show’s current ‘colour-blind’ approach to casting, I’m a little uncertain that you’d find many black soldiers in the 1881 British Army. It would have been easier to ignore had Godsacre not specifically displayed his Victorian mindset with his disbelief that a woman could be a police officer. 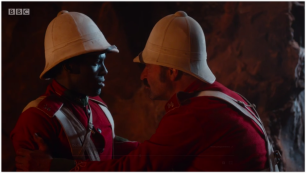 Still, it’s in keeping with the Doctor’s assertion, some weeks ago, that “history’s a whitewash”. Capaldi was again on good form this week, though his Doctor was instantly respectful of Martian culture without the self-doubt and incipient bigotry displayed by Jon Pertwee and even Matt Smith. Indeed, if I have a criticism of this episode, it was that the Doctor (and Bill), were almost backgrounded in the story. Yes, both found themselves playing pivotal roles (Bill particularly, in her interaction with Martian queen Itraxxa); but ultimately the events, and their resolution, were all driven by the British soldiers and the Ice Warriors.

Of the latter, it’s fair to say that Gatiss did well at expanding their culture, while still not losing the viewer’s sympathy for this militaristic warrior race. Yes, they’re now inescapably reminiscent of Star Trek’s honour-driven Klingons (and also Who’s own Sontarans). But unlike either, Gatiss came up with the interesting idea of portraying the leader of this hitherto all-male race as a female. Adele Lynch, able only to express with her voice and lips, did a marvellous job as the imperious Itraxxa, in the process adding another layer to what we already know of Ice Warrior culture. 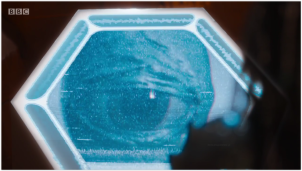 And, of course, how marvellous was it to see the return of Alpha Centauri, here playing Vulcan to the Ice Warriors’ humans (think First Contact)? I should have recognised the voice straight away – it was the actual Ysanne Churchman, Alpha’s original voice from Curse of Peladon onwards, still somehow able to do that timorous falsetto even at the age of 92! 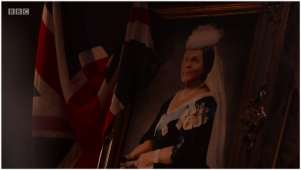 She may have been the most conspicuous nod to the past, but this was a Mark Gatiss script so there were plenty more. Aside from the very recognisable portrait of Pauline Collins as Queen Victoria (from 2006’s Tooth and Claw), there was the far more obscure exchange between Sgt-Maj Peach and Jackdaw – “RHIP – Rank Has Its Privileges”, which longtime fans will remember as a snippet of dialogue between Capt Mike Yates and Jo Grant 1972’s Day of the Daleks.

Possibly the biggest problem I had with the ep was none of Mark Gatiss’ doing. It makes perfect sense, in a story like this, for the Doctor and his companion to be separated from the TARDIS; else why would they not resolve the conflict by simply taking the soldiers back to Earth? However, no explanation was given as to quite why the TARDIS should decide to abandon its passengers on Mars. It was, very obviously, something that needed to happen for the larger plot, so that Nardole would (perhaps unwisely) release Missy from the Vault to help. But some sort of reason for the TARDIS’ behaviour would have been nice. 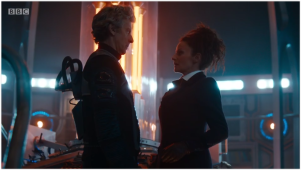 Still, that’s the hazard of modern Who, where even standalone episodes like this have to fit into a larger continuity. On its own terms, Empress of Mars was one of Gatiss’ best scripts, a terrific Ice Warrior story laced with that lovely Victorian steampunk feel. On the basis of Cold War and now this, it’s looking like Gatiss is going to be the go-to guy for any future Ice Warrior stories – and I’d certainly like to see some more.