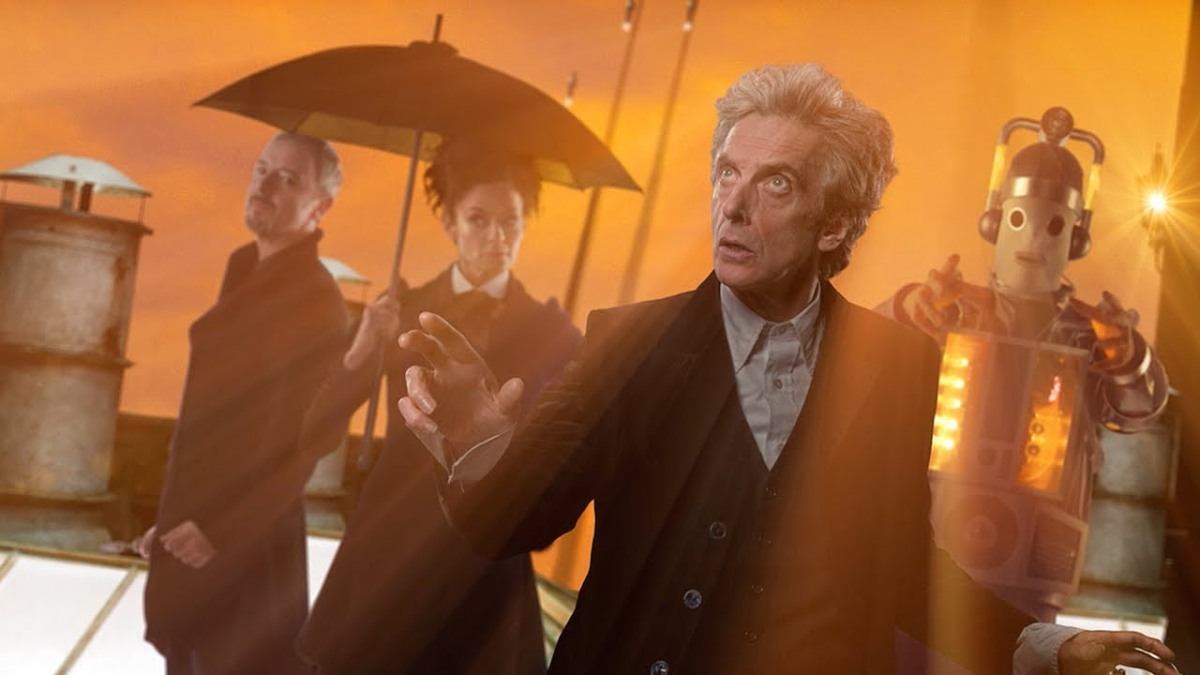 It’s (nearly) the end, but the moment has been prepared for. We knew from last week (and, let’s face it, some rather too revelatory pre-publicity) that a regeneration was in the offing for Peter Capaldi’s Twelfth Doctor, a man who seems to have spent much of this year trying to nobly sacrifice himself for the greater good. The Doctor Falls, steeped in the references to the show’s past so beloved of writer Steven Moffat, finally gave him his wish. END_OF_DOCUMENT_TOKEN_TO_BE_REPLACED

Quite the fan pleasing episode from Steven Moffat this week! I’ve said a few times that this season, while generally rather good, has felt more low key than the last, which, let’s remember, opened with a sequel to Genesis of the Daleks featuring Missy and UNIT. It’s clear now that Moffat was saving that sort of thing for the end of the season this time – with a triple whammy of ‘Genesis of the Cybermen’ featuring both Missy and her previous incarnation, in the first ‘multi-Master’ story the show’s ever done. END_OF_DOCUMENT_TOKEN_TO_BE_REPLACED

Well that was exciting, wasn’t it? A thrilling roller coaster ride in which a reptilian Ice Queen’s hard-hearted ambitions were thwarted by a selfless, mild-mannered man appealing to a sense of honour and justice. But enough about the General Election, there was an episode of Doctor Who on too (b’doom tish). END_OF_DOCUMENT_TOKEN_TO_BE_REPLACED

“Relax, and do as you’re told. Your future’s taken care of.”

Well, that was strangely anticlimactic. As the end of the so-called ‘Monk trilogy’, Lie of the Land started well, then seemed to just peter out, leaving the viewer none the wiser about many of the questions posed by the previous two parts. Who were the Monks, really? What did they hope to gain from now running the Earth? With that kind of technology, why not just take over by force, and why run when their ruse was revealed? END_OF_DOCUMENT_TOKEN_TO_BE_REPLACED

“Imagine. To hold in your hand, the heartbeat of every Dalek on Skaro. They send me life. Is it beyond the wit of a Time Lord to send them death?”

I’ll admit, last week I was a trifle surprised to find that Steven Moffat had the chutzpah to open the new series of Doctor Who by writing, effectively, a sequel to Genesis of the Daleks – a story regularly voted the best the show ever did. Yet for me, he pulled it off surprisingly well, building cleverly on the themes, characterisation and philosophy espoused by both the Doctor and Davros in that first meeting. END_OF_DOCUMENT_TOKEN_TO_BE_REPLACED

“Davros made the Daleks. But who made Davros?” After a divisive first season for Peter Capaldi’s abrasive, sometimes hard to like Twelfth Doctor, Doctor Who was back this week with a busy episode that was an obvious fan pleaser. Continuity references abounded, even outside a main plot that featured Davros, the Daleks, Missy and UNIT. Being a fan, I enjoyed it hugely. Trouble is, will the casual viewer even understand what all this is about? END_OF_DOCUMENT_TOKEN_TO_BE_REPLACED

“Turns out the afterlife is real – and it’s emptying. Every graveyard on Earth is about to burst its banks.”

One of the frequent (and justified) criticisms of Steven Moffat’s tenure in charge of Doctor Who is that he tends to undercut the sense of jeopardy by presenting death as something that can always be revoked. He even made a running gag of it with the many deaths of Rory Williams. But now, in a story that was far darker and far bleaker, he’s confronted the reality of death – and its consequences – head on.

END_OF_DOCUMENT_TOKEN_TO_BE_REPLACED

After a very divisive season of Doctor Who, we’re finally at the endgame, where all those seeded themes throughout the year may (or may not) pay off. It’s been a new approach for Steven Moffat; while there was an overall plot arc, it was kept very much in the background. Meanwhile, the real arc of the season has been its main characters, and how they’ve developed. The new Doctor, abrasive and hard to like, questioning whether he’s “a good man”; Clara, recast from part one as a “control freak” and more believably fallible as a result; new boy Danny Pink dragging her back to the real world in a kind of relationship many have interpreted as passive aggressive manipulation.

END_OF_DOCUMENT_TOKEN_TO_BE_REPLACED

“I am the one chance you’ve got of staying alive. That’s who I am.”

On writing duties for the second week in a row, Doctor Who newbie Jamie Mathieson is on a roll, producing yet another excellent episode after last week’s Mummy on the Orient Express. Presumably serving as this year’s ‘Doctor-lite’ episode, Flatline boasted an imaginative and scary monster of the week concept, some well-fleshed out guest characters, and most interestingly, thrust Clara into the spotlight as a Doctor-substitute, allowing the script to examine (and gently poke fun at) the Doctor’s usual method of operation.

END_OF_DOCUMENT_TOKEN_TO_BE_REPLACED

“He is lost in the ruins of himself. We have to bring him home.”

The arrival of a new Doctor has always been a hotly anticipated event for us fans, but until recently the rest of humanity tended to just roll their eyes indulgently at the excitement of the nerds. Since the show’s resurrection in 2005 however, it’s been getting more and more popular; to the extent that last night, Peter Capaldi’s debut as the Twelfth Doctor was simultaneously broadcast in countries all over the world, while back here in Blighty, you could go and watch it on the big screen at one of 450 cinemas across the country. Those cinemagoers were also treated to a live Q&A session with Capaldi, Jenna Coleman and Steven Moffat, broadcast by satellite from the stage of the Odeon Leicester Square.

This isn’t just a cult TV show any more – it’s a cultural phenomenon. And so, there was a lot riding on this episode, which had to introduce a Doctor who, for the post-2005 audience, would seem radically different – because he was (gasp) old.