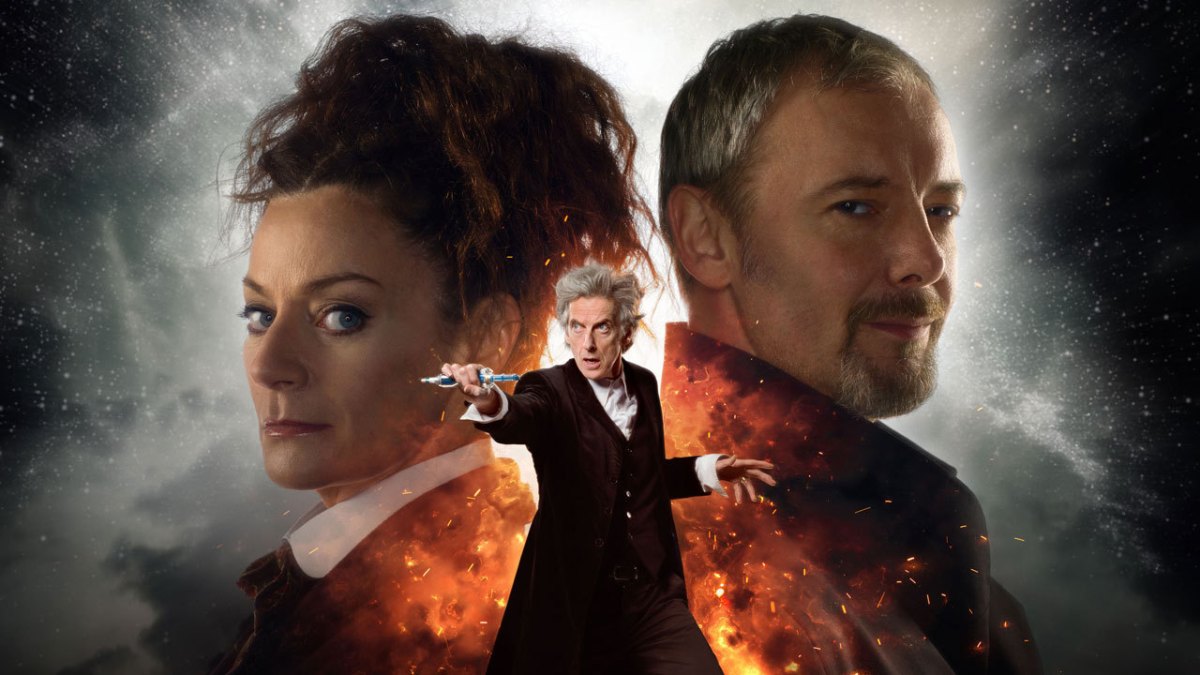 Quite the fan pleasing episode from Steven Moffat this week! I’ve said a few times that this season, while generally rather good, has felt more low key than the last, which, let’s remember, opened with a sequel to Genesis of the Daleks featuring Missy and UNIT. It’s clear now that Moffat was saving that sort of thing for the end of the season this time – with a triple whammy of ‘Genesis of the Cybermen’ featuring both Missy and her previous incarnation, in the first ‘multi-Master’ story the show’s ever done.

Yes, it’s true the show has already done a Cyberman origin story, way back in 2006 with Rise of the Cybermen. But that took place in another universe; and since then we’ve seen plenty of Cybermen in our own. Clearly there was another origin story to be told – and this one was far closer to the one we were familiar with from the original series. And , let’s face it, far more gruesome and upsetting than Tom McRae’s 2006 two-parter, which showed the process of cyber-conversion as a relatively quick transplant of a living brain into a cybernetic body. These Cybermen were “upgraded” (the word was even used several times) in a far more protracted, horrifically painful surgical process.

That also felt far more faithful to Marc Platt’s classic Big Finish audio drama Spare Parts, which Rise of the Cybermen was at least nominally based on. In actual fact, McRae’s story has virtually nothing in common with Platt’s, beyond the fact that both show the Cybermen’s origin. World Enough and Time followed Platt’s concepts to the letter – a sick, dying civilisation trying to escape a poisonous polluted world the only way they can, by becoming machines. As the enigmatic Mr Raser commented, “they are the future. To survive, they are what we all must become. 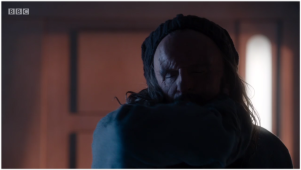 Ah, Mr Raser. Was his first initial T by any chance, making the usual nifty anagram of ‘Master’? To be fair, both the makeup and John Simm’s acting kept the plot twist a secret until you couldn’t fail to work it out from the dialogue. Raser seemed, at first, the sort of loveable eccentric with a funny accent memorably embodied in Babylon 5’s Zathras. It’s only when you watch it a second time that you can pick up on Simm’s facial features beneath the latex (for me, anyway).

As he pointed out, the Master has always loved disguises; but this is the first time we’ve seen that trait in Nu-Who. The big reveal, as he improbably just tore off what must have been a complex set of latex layers to uncover a face that needed no cleaning off, was a perfect recreation of Roger Delgado’s antics (Anthony Ainley sometimes used video effects). Here, as in Time Flight  and The King’s Demons, there was actually no point disguising himself at all (nobody on the colony ship would recognise an early 21st century British Prime Minister, after all). But it was a fun nod to the past, and after all, when has anything the Master does ever made much sense? 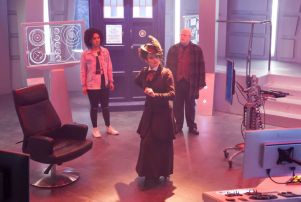 Case in point this week, Missy. Oh, she was trying, she was really trying not to be bad. But as I think most of us predicted, that wasn’t ever going to work. After some deliberately muted performances recently, Michelle Gomez was splendidly back to full “bananas” mode from the outset. That first scene was a masterpiece of fourth wall breaking comedy – “I’m that mysterious adventurer in all of time and space known only as ‘Doctor Who’… and these are my disposables, ‘Exposition’ and ‘Comic Relief’”.

The notion that ‘Doctor Who’ is indeed the main character’s real name may well have upset some fanboys; they can take comfort in the Doctor’s assurance that she was just trying to wind Bill up. But it was noticeable that he never actually denied it, and even used it himself – “I like it”. And who can say? Time Lords have rarely seemed so alien as in this story. Missy remarked that, “Time Lords can be ‘friends’; anything else is just cradle snatching”. Together with Bill’s bafflement at the idea that Time Lords have no fixed gender, it built on previous Missy assertions that make Gallifreyans seem further removed from anything we know than before. Mind you, trust Bill to make the point that, even with no fixed gender, they still call themselves “Time Lords”…

Aside from the Master meeting him/herself for the first time in the show’s history, and an effectively gruesome origin for the Cybermen, Steven Moffat’s usual fascination with time itself proved the useful McGuffin for the story. Whatever you may think of his fondness for convoluted temporal paradoxes, he’s certainly taken more advantage of the fact that this is a show about time travel than anyone before him.

This time, there was no time travel, and no paradox; but a novel use of the theory that time flows at a slower speed when affected by gravity. Here, I worked out what was going on (as, I assume, did most people) as soon as I saw that clock in Bill’s hospital room – 2 days at the top of the ship, 365,000 at the bottom. A thousand years.

Bill’s plight was heartbreaking, the more so because (unlike Clara) we’ve not been deluged with ominous forebodings about her mortality. On the contrary, Bill’s been a refreshing change precisely because it seemed like no great mystery revolved around her; she’s just a likeable, normal, human being, like the ones the Doctor used to travel with (and was that Dodo Chaplet’s old dress she was wearing before it got a hole blown through it?).

It was a mark of the ep’s deft mixture of humour and horror that she ended the ep apparently irrevocably cyber-converted (though we have been there before a couple of seasons ago with Danny Pink). The Cybermen have rarely seemed such a scary concept as here; the revelation that all of them were in unbearable pain (“Die me. Die me.”) was horrific, as was the idea that those ‘handles’ don’t stop you feeling the pain. They just stop you caring – the mark of a Cyberman since the beginning.

All this unfolded in a clever, non-linear narrative that worked well, especially in juxtaposing the different time flows at the top and bottom of the ship. The direction here was excellent; Rachel Talalay’s emotional slow downward reveal of Bill’s mortal wound at the beginning cleverly mirrored with a reverse, feet to head reveal of the Cyberman she had become at the end.

And what to make of that pre-credits teaser? The Doctor, unaccompanied by Bill or Nardole, apparently failing to stave off his next regeneration. From the trailer onwards, this season has been teasing us with the foreknowledge that this is the last year for the Twelfth Doctor. I can imagine some people might be getting fed up with it by now; but I’m still wondering if Moffat has actually managed to pull off the ultimate coup of presenting us with a new Doctor before the viewing public knows who’s been cast…

To be balanced, there were some things about this ep that didn’t seem to make a lot of sense. I can get over the Master’s wholly unnecessary disguise given his past history and general nuttiness. But we’re yet again faced with the conundrum of multi-Doctor stories – how is it that Missy, who was there in her subjective past, doesn’t remember anything about the ship they’ve landed on? She’s not that nuts. 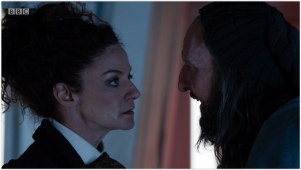 While we’re at it, if the time flow is so different at either end of the ship, how do the proto-Cybermen manage to use the lifts to travel up and kidnap the humans? Even if that does work, shouldn’t they be massively more evolved each time they appear? What did happen to that expedition to deck 507, and does it explain the scan that shows lifesigns across virtually the whole height/length of the ship when they should only be on deck 1056?

Actually, I fully expect many of those head-scratchers to be resolved with next week’s “last in the present series” (I’m rejecting the “season finale” Americanism and taking back the British version). Certainly some of the shots in the “Next Time” trailer suggest explanations. It didn’t, however, reveal whether Bill really is irrevocably ‘Cybernised’ (this being Steven Moffat, I’m doubtful), or whether the Doctor really will regenerate. That’s good – I like the suspense. For now, this was a storming enough episode for me to forgive its apparent flaws, and wait with bated breath for next week…

One thought on “Doctor Who: Season 10, Episode 11 – World Enough and Time”