“You wish to know where my true loyalties lie? Not with any King or Queen, but with the people. The people who suffer under despots and prosper under just rule. The people whose hearts you aim to win.”

Perhaps it’s a result of this year’s shorter than usual season run, but this week’s second episode of Game of Thrones seemed to really ramp up the pace after last week’s relatively sedate scene-setter. The show’s always been unpredictable in giving us eps packed with intrigue, thrills and spectacle fairly early in the run; but never so early, as I recall, as the very second episode. 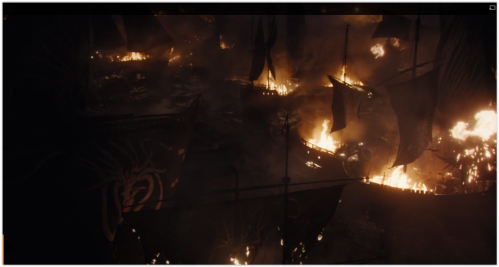 There was a real sense of the show’s multifarious plot strands starting to come together this week. Finally getting Daenerys (almost) on the same continent as the rest of the players was a HUGE help, but the alliances as we draw into the endgame brought together characters who we’d never seen in the same room before.

Nowhere was that better demonstrated than in the very first scene, as veteran scripter Bryan Cogman plunged us straight into Daenerys’ war council at Dragonstone. Daenerys may not have had much to say last week, but this week she more than made up for it in a lengthy but gripping scene as she drew her allies close – Tyrion, Varys, Yara and Theon Greyjoy, Olenna Tyrell and Ellaria Sand. 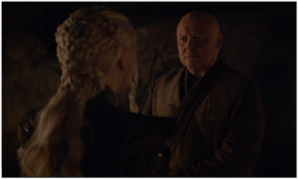 Bringing all these larger-than-life characters together in one room pretty much guaranteed an intense scene, especially with the amount of scenery chewing the respective performers are capable of in just a two-hander. Credit to Emilia Clarke for holding her own with the likes of Diana Rigg, Peter Dinklage and Indira Varma. More than holding her own, in fact; despite the assurances she gave to the defensive Varys, her imperious tone when she invited Jon Snow to visit and “bend the knee” caused more than a few sharp glances in her direction, and with good reason.

After all, Varys has hardly been shown to be infallible in his choices of which monarch would be the best for the realm. While Daenerys has certainly experienced plenty that would make her understand Westeros’ ordinary people, the flashes of arrogance she showed in that scene made you wonder if the acorn had fallen far from the Mad King’s tree there. Strength and resolution are probably good in a potential monarch; arrogance and entitlement usually aren’t.

As can be seen in the ever more isolated figure of Cersei Lannister, Queen of… well, a couple of Kingdoms, anyway. She too was holding a council of allies, portraying her latest rivals as invading foreigners (just as Tyrion had predicted). Cersei’s an increasingly irredeemable monster (especially when channelling Nigel Farage), but Lena Headey’s performance manages to keep her just this side of hateable. After last week’s discussion of her ‘legacy’ (or lack thereof) with Jaime, Cersei cuts something of a tragic figure as well as a villain. She’s got everything she wanted, but lost everything she loved to get it. Headey manages to convey that sense of ashes in the mouth rather well.

While the Lannister and Targaryen camps plotted and schemed, the major plotline yet to join them is the battle in the North; Jon Snow and his ragged band being currently the only ones standing against the Unstoppable Supernatural Menace that every fantasy story is bound to have.

That too may be about to converge with the other plots though. This week, Jon informed his bannermen that, not only had he received word from Sam Tarly of a huge deposit of dragnonglass at Dragonstone, but by a mightily convenient coincidence he’d received an invitation to visit from Daenerys. So off he trots, leaving a surprised looking Sansa to mind the store.

It’s a welcome development. Since the unlamented departure of the Boltons from Winterfell, the plotlines in the North have felt as separate from the rest of the narrative as Dany’s extended sojourn on Essos. I don’t know how much luck Jon’s going to have convincing her that the danger beyond the Wall is liable to more threatening than the crumbling Lannisters, but at least someone’s finally realised that a good weapon against the White Walkers might be a creature that can breathe fire.

I reckon the North might be better off with Sansa running the place than the ever-surly Jon, anyway; providing, that is, she can resist the blandishments of the wily Littlefinger. Aiden Gillen’s come in for a bit of (deserved) stick over the years for Baelish’s wobbly accent, but credit where credit’s due – he’s managed to make the oily snake so untrustworthy you assume everything he says and does must have an ulterior motive. He might have been actually being honest with Jon (though I doubt it) about his love for Sansa; there again, he might have brought it up to provoke exactly the reaction it did. Jon Snow is not a subtle man.

Mark Mylod, on directing duties this week, managed to switch the pace in a moment with the unexpected arrival of one of the show’s trademark Big Battles in the last quarter of the ep. The spectacle of the feuding Iron Fleets was carried off with almost as much gusto as previous efforts from directors Neil Marshall and Miguel Sapochnik, so Mylod has reason to be proud. 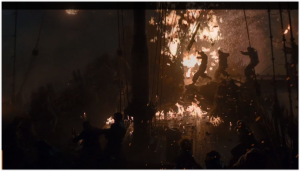 That battle, as well as being enthralling, was interesting too for the spanner it’s likely going to put in Dany’s (and Tyrion’s) intricate strategy. They need that fleet to get the Unsullied to Casterly Rock; judging by what we saw here, there’s precious little of it left. It occurred to me, in the thick of the fighting, that if Yara could succeed in knocking off Euron, the rest of the Ironborn might rally around her with the fleet he created.

However, that hasn’t ended up well for her. It was a well played moment of extended tension as we wondered whether the wavering Theon might end up saving the day after all; though it may have been truer to established form that he ultimately leapt over the side to ‘safety’. I wouldn’t count him out just yet though. Perhaps more than anyone in the show, Theon’s in need of some redemption – he may yet surprise us.

Well, it didn’t take us long to get back to those, did it? Having said that, the love scene between Grey Worm and Missandei was surprisingly sweet and tender (though obviously with loads of nudity).

Yes, there’s no real reason for their romantic plotline, but thanks to Jacob Anderson and Nathalie Emmanuel, it’s been a good example of sympathetic depth given to even the show’s more minor characters. The scene may have bared plenty of flesh, but it didn’t feel exploitative.

If it was exploitative you wanted, it looked like you were going to get it when Ellaria and Yara began the least subtle game of flirting even this show’s ever seen. But just as they were getting down to it, the Violence contingent interrupted in the shape of Euron’s fleet, bringing with it the customary blade-hacking arterial sprays left right and centre. It’s as much an integral part of this show as the weekly head-squelching in The Walking Dead. Spectacular though that may have been, the moment this week that really made me wince was Sam Tarly’s experimental treatment for Jorah Mormont’s greyscale. Iain Glen really sold the pain of it, and the closeups of what looked like thick scabs being wrenched off a skin covered in yellow pus were… less than pleasant.

This was a barnstormer of a second episode, what with the converging of plotlines, the world of ham unleashed by so many of the show’s scene-stealers finally coming together, and a crowd-pleasing battle. Not only did it ramp up the tension of this season surprisingly quickly, it also felt like we were beginning to accelerate to the ultimate end of the show as a whole. I’ve a feeling there won’t be much time to take a breather for the remaining eps.