“If we don’t put aside our enmities we will all die. And then it won’t matter whose skeleton sits on the Iron Throne.”

A talkier episode than last week for Game of Thrones, but a thrilling one nonetheless. There was plenty of plot development going on, but aside from the usual intrigue, the focal point of this ep was on the long-awaited meeting of Daenerys Targaryen with Jon Snow. It didn’t disappoint.

Pretty much as soon as the dragons were hatched, it was clear Dany was going to have a major role in the defeat of the Unstoppable Supernatural Menace to the north. However, while this might have been obvious to the viewer, this is actually the first she’s heard of it, and her scepticism was understandable. After all, she’s been scheming for years to regain her father’s throne in King’s Landing – it’s a bit of an eleventh hour surprise (for her) to find that matters less than she thought.

Emilia Clarke was superbly imperious in her deservedly lengthy scenes with Jon, really believable as a leader forged in fire. Jon, for his part, did his best ‘down-to-earth Northerner’ act, though in truth it was Liam Cunnigham as Ser Davos who owned scene more than the surly Kit Harington. Jon’s very important, plotwise; but he still comes across more often than not as a surly scowling teenager. As Tyrion wryly pointed out to him, “you look a lot better brooding than me”.

Bran Stark, who probably should be a surly teenager, was back too, in an emotional reunion with Sansa. Far from being surly, though, his recent promotion to Three Eyed Raven has turned him into a sort of junior Gandalf, prone to staring emotionlessly into the middle distance while delivering cryptic pronouncements like “I need to learn to see better. When the long night comes again I need to be ready”. Of the show’s junior cast who’ve made it this far, Isaac Hempstead-Wright is the one struck most obviously by puberty, looking years older than the narrative timeframe should allow. But maybe that just a side effect of being the Three Eyed Raven; no wonder Sansa was confused.

When it comes to running the North, though, she’s clearly more than capable. The West Wing-style walk-and-talk of her with her advisors showed the character as smart, thoughtful and authoritative; she’ll probably make a better leader than Jon ever would. That may have been on Baelish’s mind too, as he gave her some surprisingly good advice that is the best insight to his character yet: “fight every battle, everywhere, always, in your mind. Everyone is your enemy, everyone is your friend. Every possible series of events is happening, all at once. Live that way, and nothing will surprise you.”

Baelish is clearly the only one who’s thinking about what happens after the war, and he’s right to. Dany and Jon might be treating each other with suspicion right now, but what will she think of his perceived rebellion if it becomes clear (as in Bran’s vision) that he’s at least half Targaryen himself? More to the point, how can she restore the power of house Targaryen if she herself is its last doyen – and she can’t have children? If Jon is the offspring of Lyanna Stark and Rhaegar Targaryen, does that give his half-sister any claim? As Baelish seems to have foreseen, a Targaryen victory might just be a brief pause before more battles to come.

It wasn’t much of a battle compared with last week’s seaborne hellscape, but the montage of Dany’s forces taking Casterly Rock was cleverly done, intercut as it was with what the Lannister forces were really up to – seizing Highgarden. I always thought Tyrion’s determination to seize Casterly Rock was rather a strategic error. There’s a reason we’ve never even seen it in the show till now – the Lannisters’ power base shifted to King’s Landing itself fairly early on. Seizing the old ancestral seat was never going to achieve much materially; they couldn’t even raid the family silver, since the return of oily Iron Banker Tycho Nesteris made it clear that the Lannisters are, at present, flat broke.

So it was that taking a lesson from old adversary Robb Stark, Jaime Lannister’s forces went were Daenerys’ weren’t. Taking Highgarden takes the Tyrells out of the game, and makes for a more substantial victory than seizing an empty castle the Unsullied probably can’t hold anyway.

Sadly it also means we’ve seen the last of the magnificent Diana Rigg as Tyrell matriarch and ‘Queen of Thorns’ Olenna. Her final scene with Jaime was as intense as you’d expect, she admitting her failings while Nicolaj Coster-Waldau’s performance made it clear that Jaime is more than aware of his own. Olenna was as acid-tongued as ever (my life is complete now I’ve heard Diana Rigg say of Joffrey, “he really was a cunt, wasn’t he?”). But it was her last barb that really struck home; the revelation (to Jaime, anyway) that she was the one to poison his petty tyrant of a son. That’s a woman going to her grave with a smile on her face.

Unlike Ellaria Sand. It was another intense scene as the brittly-smiling Cersei circled her captives, seemingly debating how best to dispose of them. Her final solution was truly horrific – poisoning Tyene, the last remaining Sand Snake, with the same poison used to kill Myrcella, then leaving Ellaria alive to watch her daughter die and decompose. I shall miss Indira Varma as Ellaria, but it was another demonstration of how good Lena Headey is as Cersei that you found yourself feeling sympathy for her even as she enacted this monstrous plan. Even more than power, her children were the most important thing in the world to her. Now all she has left is revenge. 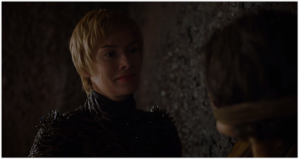 Still not a great deal of the former, with the plot storming ahead, but plenty of the latter. Fans of the show’s trademark gratuitous nudity had to content themselves with a couple of shots of a naked Cersei, though I gather the show uses a body double for Lena Headey in such scenes:

That being the case, I wonder if they also used a butt-double for Nicolaj Coster-Waldau as Cersei fell to her knees and dragged his breeches off?

Violence there was aplenty though, even in a mainly dialogue-driven ep. We only saw glimpses of the battles for Casterly Rock and Highgarden, but the glimpse were plenty full of the usual hacking blades and arterial sprays: 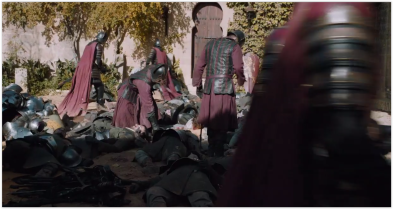 So, that’s the Dornish and the Tyrells out of play in one episode. It looks like Daenerys is losing allies almost as quickly as they join her. She still has a huge strategic advantage, especially with the dragons as living Weapons of Mass Destruction; but who’s to say the Lannisters won’t make good use of Qyburn’s mega-crossbow?

This may have been a talky ep, but the cleverly-plotted removal of two such major players meant that, plotwise, a lot happened. It helped that the dialogue was as well-crafted as we’ve come to expect, and the characters as mired in shades of grey as ever. The much-anticipated meeting of Jon and Daenerys was handled well, and given a deserved lion’s share of screen time, nicely bookending the ep with one formal confrontation and one informal conversation, clearly showing the importance of the characters. Good stuff.