This was a bit of an unusual one, by Black Mirror standards. Yes, it was a dark tale of people doing bad things and suffering in a world of the near future; but this time, the technological innovation on which the tale hinged was portrayed as neither good nor bad. That all depended on the people who used it, and the implication was that, in general, it did more good than harm.

The memory recording device on which the plot hinged was, as Harrison Ford comments of Replicants in Blade Runner, “like any other machine,… either a benefit or a hazard”. As ever, the script capably established the properties of the device and its uses – in this case, it seemed, to investigate insurance claims via cross-referenced witness reports, like a futuristic Rashomon. As likeable investigator Shazia (Kira Sonia Sawar) commented, it was investigation by crowdsourcing.

There was no evidence till much later that the device could be used in the investigation of crimes, but it was an obvious conclusion to jump to. The crimes committed here spiralled ever more nastily, beginning with a hit and run and culminating in the brutal murder of an entire family.

It was the murders that provided the meat of the ep, with the tech almost incidental. Andrea Riseborough’s ever more desperate culprit Mia was a monster, sure enough; but she was a monster who was sort of understandable, if not forgivable. She (and the other characters for that matter) showed Charlie Brooker’s talent at creating believable human beings of every stripe. While she grew into a monster, Shazia, her family, and the quirky characters she met during her investigation were likeable, flawed and real. 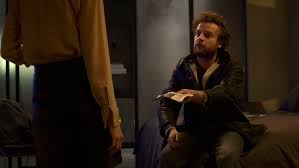 Interestingly, when Andrew Gower’s Rob committed the hit and run that started it all in the ep’s prologue, I’d assumed he’d be our main villain – but he was offed fairly quickly by Mia. That made for an interesting twist, and one for which apparently we can thank Andrea Riseborough herself. Having been offered the part of Mia, she suggested it would be far more interesting if she, a mother, was driven to the story’s ultimate horror of murdering a baby. Brooker took her suggestion on board, and a more interesting character emerged as a result.

Having said all that, this was fairly predictable as crime stories go. As Shazia’s investigation of the driverless van collision drew ever closer to Mia, it was only ever a question of time till she was found out. What did make it suspenseful was that you were never sure how much further Mia would go. Having committed one murder, they say it gets easier to commit others; and the story worked because it had taken time to make the victims likeable. You kept hoping Mia wouldn’t go any further – if anything here was representative of Brooker’s misanthropy, it was that she did, every time.

The direction, by Australian (and director of The Road) John Hillcoat was visually stunning, making the most of the breathtaking scenery around Reykjavik where the ep was filmed. This was easily the best looking ep of this run. And yet, I wondered whether that was entirely a good idea. Reykjavik had clearly been chosen not to be Reykjavik, but to be a slightly “off” near future / alternative UK – all the characters were British, as were the place names. But those stunning backdrops were unmistakably Iceland. Ironically, it might have convinced more as an alternative Britain had Hillcoat avoided the sweeping grandeur of those distinctive landscapes. 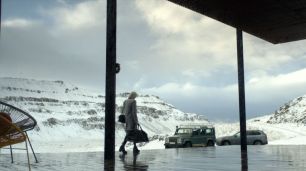 One of Brooker’s stated intentions for the show as to make a tech-inspired variant of classic anthology show Tales of the Unexpected, in which many (most?) episodes end with a (usually pretty obvious) twist. In that at least this ep lived up to the show’s USP. The revelation that Mia needn’t have murdered the baby at all because it was blind was quickly followed up by the Chekhov’s gun-style reveal that the unwanted guinea pig was a far more useful witness. A double twist – that’s pretty cool.

Crocodile was a bleak, nasty story, about some pretty nasty people, its chilly locations recalling all those Scandinavian misery fests where women in chunky jumpers look miserable while investigating murders. For all that (and even though it was a pretty good drama) as a Black Mirror ep it felt rather slight.