In Black Mirror’s first Netflix run, Charlie Brooker decided, as a serial contrarian, to write against type and present us with a story in which technological innovation was used to provide hope and optimism. The result was the genuinely uplifting, and critically acclaimed, San Junipero, which used its technological hook to present us with a genuinely moving love story between two people who without the tech would never have met. It was heartfelt and lovely – if you ever think Brooker is completely without hope for the future, this is the one to look at.

I don’t know whether Hang the DJ was an attempt to repeat that success, or whether Brooker thinks that a whole six episodes of inventive but relentless misery might be a bit much. Either way, the comparison is inevitable – this too is a sweetly likeable romance, with enough of Brooker’s trademark cynicism to keep it from being a Richard Curtis style nausea-fest.

This one took its time eking out the explanation of its tech-based premise, to great effect. It was established fairly quickly that we were in a world where people’s love lives were basically dictated by an all-powerful dating app; the rules of this world were revealed gradually as we went along as we learned that every time a relationship ended people were shunted into another. And that the oddly utopian (if sinister) community in which they lived was surrounded by a mysterious Wall, outside of which lurked… what?

This steady drip of reveals culminated in the obvious conclusion (as Joe Cole’s Frank had actually guessed earlier) that none of them were real; and that the whole thing was being run solely for the benefit of Frank and Amy. In that, it felt like a rather more comprehensible version of those later eps of The Prisoner. And once that resemblance hit me, the whole thing felt reminiscent of that classic 60s mind-screw. 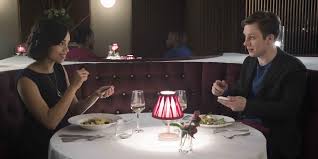 It did go at least one better (depending on your taste) by actually making sense at the end. So the whole thing was nothing more than a simulation, the last in a series of 1000 where 998 had the same result for Frank and Mia. That seemingly throwaway remark about the Coach app’s success rate as being 99.8% earlier in the ep made sense at that point – it had been cleverly seeded.

Along the way though, the ep had a lot of fun with the conventions of modern, app-based dating. Guess what? I don’t think Brooker likes it that much. It did make for some amusing moments including some strangely hilarious sex scenes (“Do you mind if I pretend you’re her?” / “If I can pretend you’re him.”). And it was a nice gesture to see that Amy at least had one romantic partner of her own gender.

In part, it worked so well because the two leads were very likeable and had genuine chemistry; though it slightly undercut the drama that you never had any doubt they’d end up together. Joe Cole, a nice looking bloke who usually seems to get typecast as thugs and psychos, was unexpectedly loveable as the all-too flawed Frank; Broadchurch’s Georgina Campbell a perfect match for him as Mia.

The ending, as we saw the real (or were they?) Frank and Mia meet to the Smiths’ tune from which the title was taken was nicely ambiguous. We saw each glance, glance away, hesitate – and move towards each other as the screen cut to the credits. So was there a happy ending for this Frank and Mia, or were they destined to be one of the ill-fated 0.2%? That we didn’t get a definitive answer was a good way to avoid the schmaltz that would have pushed the story into Richard Curtis territory.

As a more optimistic view of humanity’s relationship with tech, as well as a romance story, comparisons with San Junipero are fairly inevitable. I don’t think Hang the DJ quite reached that level, but if we’re going to have a “nice” Black Mirror once a season, I’ll have no problem if they’re all as enjoyable as this was.