“… some kinda shit in between!”

After last week’s unexpected blip of a genuinely good episode, this week The Walking Dead was back to “well, that was… ok I guess”. This was courtesy of a script by newcomer Eddie Guzelian that went back to the show’s well-tapped vein of war movies and Westerns, but I have to say the one genre I wasn’t really expecting to see was… comedy road movie? 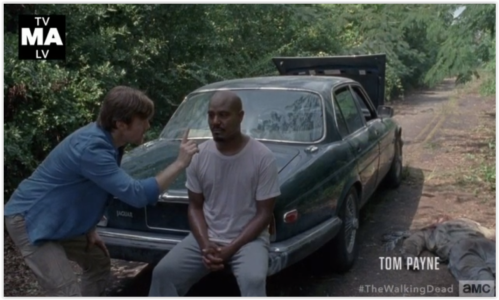 Because yes, that was exactly how the unlikely breakout of Father Gabriel and Dr… whatever his name is was played. OK, ok, I now recall it was Dr Carson, but until now he’s been given no character whatsoever. And now never will, which rather makes one wonder what the point was of including him so prominently.

Unless it was just as straight man to the eternally optimistic Gabriel, who in all fairness got the show’s most brutal of punchlines. Gabriel and Carson started out having the most OTT comical bad luck – not only had they chosen to escape the Sanctuary in the least reliable car imaginable (a 1970s Jaguar which broke down right on cue), Carson had bizarrely allowed the man he knew to be suffering from a debilitating infection to actually drive the thing. I know, hilarious, right?

All of this was only plausible within the genre framework of a comedy road trip – think De Niro and Charles Grodin in Midnight Run. I mean come on, no believable characters would be so dumb, surely? Then the sudden turnaround of their luck, which Gabriel naturally attributed to God (“I’m saying nothing”) climaxed in a sequence in which the near-blind Gabriel actually had the implausible good fortune to shoot a ravenous Walker right off his buddy’s chest without harming him.

I must admit, at this point I was in danger of throwing something at the TV, not least because the script seemed to be backing up Gabriel’s assertion that God Is The Co-Pilot. So hurrah that he was eventually so utterly disabused of that notion when Carson was pointlessly killed without ever gaining anything by way of an actual character. Boo for how they got there though – that was, I’m afraid, just silly.

Other plots were available, and thankfully they were less silly. With Alexandria burnt out, the Kingdom invaded, the Dump’s inhabitants all dead/undead and Oceanside doing its best impression of the USA c1940, the Hilltop is the only settlement left standing in the All Out War. So it was here that all the characters were drawn to in a journey that would plumb the depths of their characters, offering redemption and damnation.

Additionally, the Hilltop has found itself recast as the All Out War’s Stalag 112B, and the tensions with the prisoners of war (one of whom was surprisingly soulful and sexy) were to the foreground, in case you hadn’t got the war movie parallel from Daryl’s Doom Patrol. With shades of Ice Cold in Alex the latter group had to deal with their lack of faith in the traitor in their midst. Again in classic war movie style, two of them had particularly personal reasons to dislike the dubious Dwight – Tara, whose girlfriend he killed, and Daryl, whose bike he stole.

OK, the first of those was actually a serious plot point, and fair play – the ep didn’t shy way from confronting it. Tara has been itching to off Dwight for some eps now, regardless of how counter productive it might be; sadly, that seems to be the only defining aspect of her personality right now. Nonetheless, the script – and Michael Satrazemis’ direction – did manage to wring some real tension from their chase through the wood, and still left you uncertain as to which way Dwight would jump. And while it didn’t give her any more in the way of depth either, it was perfectly in keeping with the war movie style for the watching Rosita to remark that nobody could have stopped her in the same circumstances.

The death of Carl did manage to cast a pall over the ep (the brief moment of Enid crumbling into tears was nicely underplayed), and as some have suggested, I found myself wondering whether the worryingly intense Henry was basically going to take on his narrative function. Let’s face it, “which one of you killed my brother?” does not set the scene for a balanced individual (though it fits perfectly with the archetypes of both war movie and Western). In that context, Morgan’s deliberate lie – that Gavin did it, and Henry had already taken care of him – was an interesting development. Morgan might be regaining some perspective.  If so, it’s setting the scene for some really horrible things to happen when it turns out that Henry didn’t believe him…

The Western aspect of the ep might have seemed most obvious in Maggie’s sort of camp commandant / sheriff hybrid (seriously, she had her hand resting on her holstered gun pretty much the whole time), but for me it came from the most unlikely of characters – Eugene. Think about it – he’s playing a dangerous game, playing both sides against the middle and hoping neither realises. That’s basically the role played by Clint Eastwood in A Fistful of Dollars.

Clint may win in the end of that movie, but he suffers the mother of nasty beatings on the way. Eugene, who as a coward bent on his own self-preservation has been one of the most realistic characters in the show, seems an unlikely saviour; but I quite like the idea that even he can be a Big Damn Hero. It’s just a shame the show can’t do it in a way that isn’t quite so hackneyed. 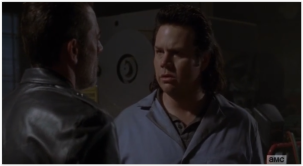 Actually this was almost a gore free week, despite a fairly heavy Walker presence. As ever, the mix of Walkers and water yielded some gruesomely squelchy effects as Daryl and co forded the swamp, Vietnam-style:

For the gore to have a maximum effect, you have to be emotionally invested in the people suffering it, as with the sad fate of the Scavengers last week. If it’s just any old Walker, it’s just spectacle. But Negan’s exploratory surgery with Lucille did at least offer that, as he pondered the next strategy in the All Out War – germ warfare… 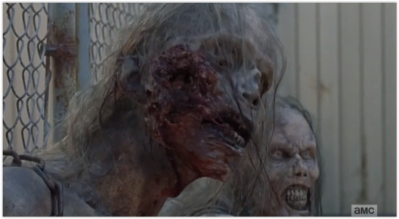 An entertaining enough ep, then, even if it trod a well-worn path for the show. Some of the character development was genuinely good – I liked the overdue confrontation between Tara and Dwight, and Morgan’s brief moment of redemption sets him on an interesting path. As an ep, it benefitted from not having to be a big event, like the mid-season opener; but it wasn’t as well-crafted as last week’s. Nonetheless, I wasn’t too disappointed, which is frequently the best you can say for the show these days…