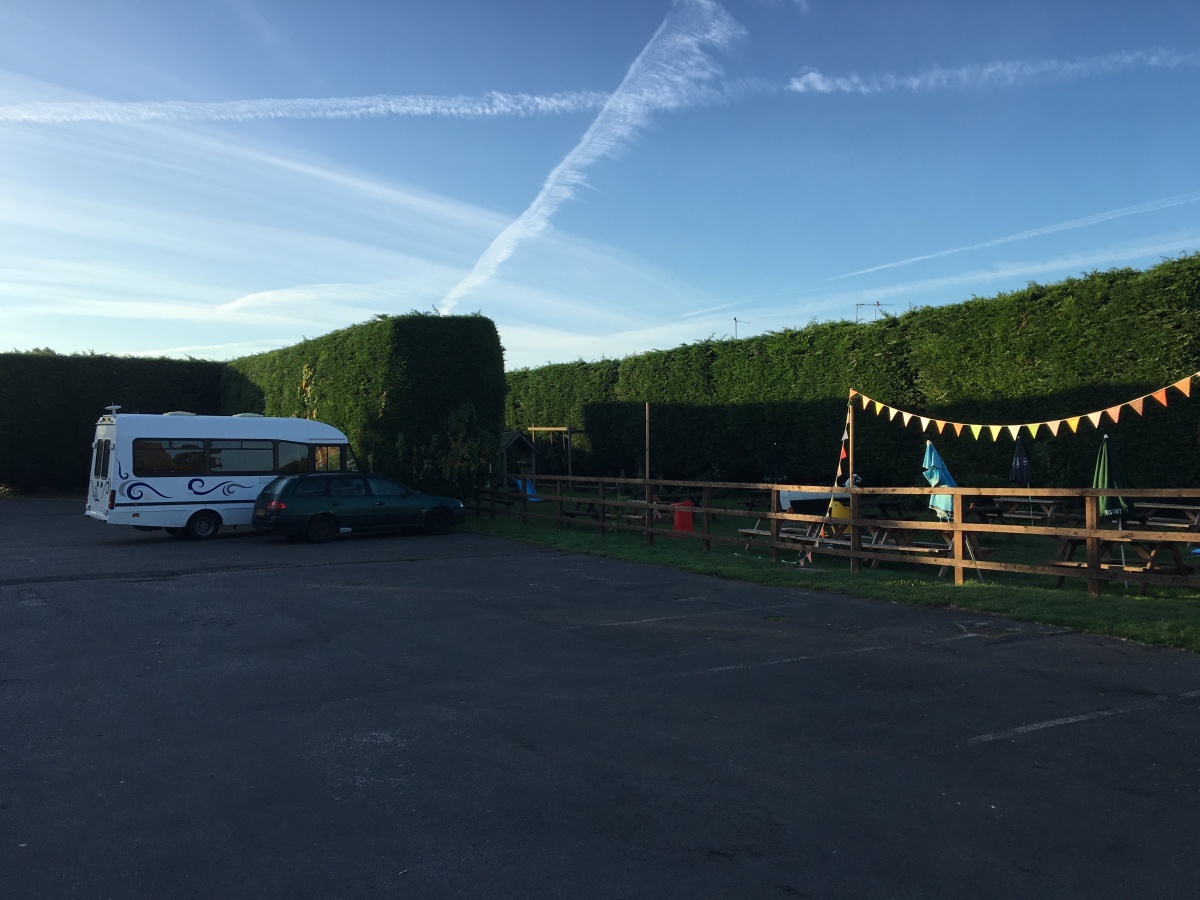 My first big trip in the van, and everything’s ready to go! Everything, that is, apart from me, as I once again wake up in the White Horse car park with a hangover. A quick glance out of the window reveals that Phil must have been too drunk to drive himself, as his car is parked next to me. What an enjoyable night.

Aiden’s still with me, and we trot off to the convenience store – in his case to get some food, in mine because the non-fridge hasn’t got any milk in it and I want a cup of tea. We head our separate ways as he goes to the bus stop to begin his journey to London, and I return to the van for a welcome brew.

I’d actually thought he needed a lift back to Stretham first, so there are still a few things I need to pick up back there. So I head back home before the start of the Grand Voyage, and discover the registration document for the van has turned up in the post from the DVLA. I’d been wanting to check, and yes, it turns out it is registered as a motorcaravan. Glad about that, it means it only needs a standard class 4 (car style) MOT, rather than the far stricter one it would need if it was still registered as a bus.

As I finish packing the van, I notice that one of the roller blinds hasn’t sprung back up as I drove. It turns out the return spring doesn’t work, so I try rolling it up by hand. Big mistake – the whole blind pops out of its socket and tumbles, unravelling, onto the sofa. 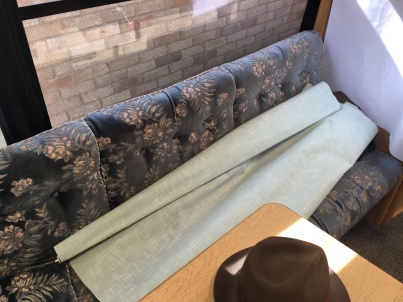 Cue much annoyed fumbling as I try to slot the roller back into place behind a panel which would be impossible to remove without dismantling all the cupboards above it first. It’s fiddly and annoying, but eventually I manage. However, the whole interior is so hot that by this time I’m sweating buckets, so I swap out my previously clean, now sweat-sodden shirt for a new, somewhat thinner one. At least I now know how to remove and replace the blinds, which is good as I want to replace the virtually transparent material with proper blackout cloth. 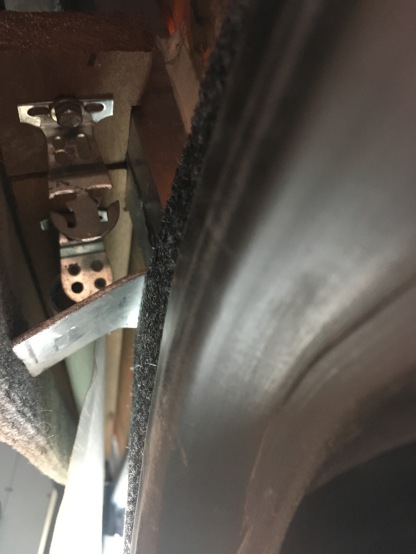 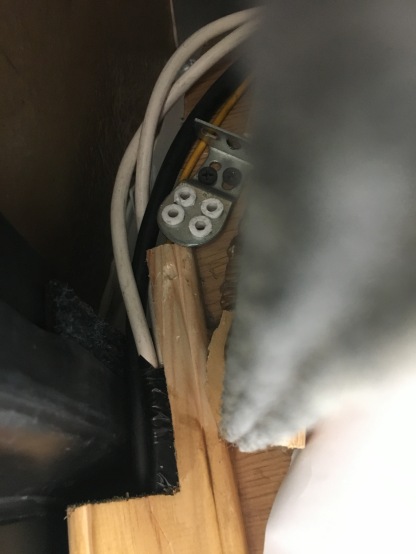 I need to fuel up, so I head back to Milton (yet again), and the Tesco fuel station, which turns out to be an adventure in itself. Only a couple of the pumps actually have any diesel, apparently a result of half the other nearby garages being closed for renovation. And the only two with the pipe on the right side for my tank are blocked by a family in a rented Audi A4 estate who aren’t actually filling it up but instead seem to be frantically searching the interior for… something. 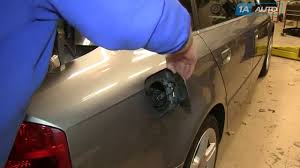 What it turns out they’re searching for is the fuel cap release, I discover after waiting for ten minutes with a steadily growing queue behind me. And they haven’t filled up and won’t move till they do. So I google “how to open 2014 Audi A4 fuel cap” and give them the answer in less than a minute. You just make sure the doors are unlocked, and press the flap, at which point it pops open.

There’s not much gratitude forthcoming, but at least they’ll be out of the way now, I think. But no – at this point, the pump’s operating system crashes and reboots, rendering it useless. I check the vacant pump in front, which is still working, and am eventually able to persuade them to at least move forward to that one so the now massive queue can move forward a bit and they can fuel up without waiting. By the time all that’s happened, the other pump has rebooted and I’m FINALLY able to fill the tank.

And off I go! The ultimate destination is Cornwall, which would be five and a half hours of driving. But I’m breaking the journey up with a trip to see my brother, who lives in a village just outside Swindon. That’s still two and a half hours behind the wheel of a rather agricultural bus, but I’m pleasantly surprise to not find it too uncomfortable. By comparison, it’s easier and comfier to drive than a classic Mini, though it’s like a tractor compared to my old Peugeot 306 convertible.

It’s slower too. Yes, it can get up to 70mph, but it takes an age of flat ground to do it. But the slightest hint of a hill will drag the speed down to more like 55 even on the mildest of gradients. Still, I’m used to this – I used to drive a 1960 Ford Popular that had a top speed of about 50 if you were lucky. I do feel some hints of guilt at the tailbacks following me on single carriageway roads, though.

To pass the time, I’ve loaded the iPhone with some Big Finish Doctor Who audio dramas, and I plunge back into Paul McGann’s Eighth Doctor and the Dark Eyes saga, featuring the return of Alex MacQueen’s brilliant version of the Master. However, the previous owner of the van obviously intended the cab stereo to be the main music system, and consequently the only speakers are actually mounted way in the back. This means they have to be turned up very, very loud to actually hear the stereo in the cab over the roar of the nearby engine. Some extra soundproofing under the bonnet might be a good idea if I don’t want to keep missing vital plot points about which alternate timeline the Doctor’s currently in.

It’s actually a painless enough trip though, and I actually arrive at my brother’s earlier than I’d thought I would. Later than Google Maps thought, mind – it obviously bases its ETA estimates on vehicles that can comfortably cruise at 70 mph all the time, and this is not that vehicle.

I’m also encouraged at the surprising ease with which I’m able to manoeuvre it up the narrow, twisty side street my brother lives on. This is a good sign for the narrow, twisty Cornish single lane roads I’m inevitably going to encounter the next day. I park up in the drive, and have a lovely evening chatting with my brother, his wife, and their guest Dave. Fortunately they don’t have to make up the second spare room for me – I just sleep in the van!