I wake up early, as usual – the influx of daylight through the skylights and the thin blinds always wakes me up not long after dawn. Fortunately I’m connected to my brother’s WiFi network inside the house, so I pass the time reading the Guardian and watching iPlayer until the house residents wake up.

They treat me to a nice continental breakfast of tea and pastries, and I avail myself of their guest bathroom to have a shower, so as not to use up my limited water supply. They have a lovely but unusual house, with one entire floor of guest quarters located underground so as not to upset the local planning committee. As I shower, I reflect that their guest bathroom is on its own larger than the entire interior space in my van. I’m doing minimalist living for sure.

The trip to Cornwall is going to be a further three and a half hours (adding time to Google’s ETA to take the van’s slowness into account). It’s mostly uneventful, but at one point I realise I forgot to turn the fridge onto battery power to cool while driving. So I pull into a nearby retail park, unfortunately without noticing the height restricting steel bar over the car park entrance. There’s a muffled thump somewhere atop the van, and when I stop I realise it’s knocked the flying saucer-like TV aerial loose, and it’s now hanging forlornly over the back. This isn’t a major problem as I have no plans to actually use the TV aerial, but it’s hanging half over the rear number plate, and that’s dodgy. Going to have to fix it in Cornwall, which will require a ladder to reach the roof.

There are far more hills than I’m used to from the flat fens on the way, and the van wavers between 45 and 70 mph depending on the gradient. Mostly big dual carriageways though, and smooth roads – I spend 108 miles on the M5, now listening to The River Song Diaries, which turn out to be rather fun.

When I get near my destination, though, Google Maps seems to have a sadistic turn. Rather than directing me on the available big roads, it thoughtfully directs me along an ever-narrowing route of twisty, hilly B-roads, some of which are overhung by trees so low I actually wonder if I’ll even fit underneath. The piece de resistance is a road barely wide enough to accommodate the van, which plunges down at an impossibly steep gradient, then up again with such ferocity that I actually stall the van even in second gear. This leads to one of the scariest hill starts I’ve ever done, as the slope is so steep the handbrake can’t hold the van, and I have to do some foot gymnastics to simultaneously hold clutch, accelerator and brake. That’s three pedals, and I only have two feet.

Eventually I get the thing running, and have to slip the clutch harder than I’ve ever done in any vehicle to get it ponderously to crawl up the remainder of the hill in first gear. After this, even the single lane track that follows seems like a motorway, and second gear seems like cruising speed. I resolve not to follow Google Maps’ directions so slavishly on the way back. I don’t care if there’s more traffic on the A39, it’s less terrifying. 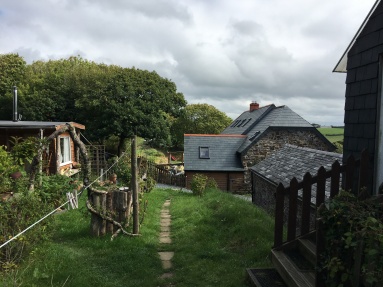 Still, I’ve been to Cornwall before, and that wasn’t entirely unexpected. It doesn’t take much longer to reach my destination – Trelay Farm, where my friend Tom currently lives in between foreign TEFL adventures. I’ve jokingly described Trelay as a “hippie commune” before, but there’s actually something to that. It’s a sustainable co-housing community of about 25 people, who all contribute to the running and maintenance of the place, and there’s always a new project going on to enlarge it and provide it with more facilities. Recently, they won a grant to install an array of solar panels to provide their electricity, but I’m not sure if they’ve actually been fitted yet.

Last time I was here, I stayed in one of the little wooden chalets they rent out to holidaymakers, but Tom has warned me these aren’t available this time. That’s not a problem of course, as I intend to sleep in the van. Fortunately Trelay also has  a field set aside for camping, and I park up here, following advice not to select anywhere “too boggy”. It turns out the campsite area also has a shower block and toilets, so again I don’t have to rely completely on my own facilities.

It’s great to see Tom again – he’s one of my closest friends, but due to his habit of world travelling and his location in Cornwall when in the UK, we don’t see each other that often. As ever, that leads to a pub trip with a few pints and a meal as we discuss the crossroads in life that we’re both at. Me in deciding whether or not to do vanlife full time, him in where to go to teach English next and how to raise money to do it. I’m not sure if either of us come to any decisions, but it’s a cathartic chat, and it’s always fun to be with him.

We spend the evening playing the card game known as Dobble with his mum Kathy in her little flat, a larger replacement for which is currently being constructed atop the original farmhouse. That explains the giant scaffolding and polythene erection I spotted driving in. Much beer and wine later, she retires to bed, and Tom and I retreat to the van where more beer, more Dobble, and more heart to heart chatting await, until well after 1am. It’s a good night.