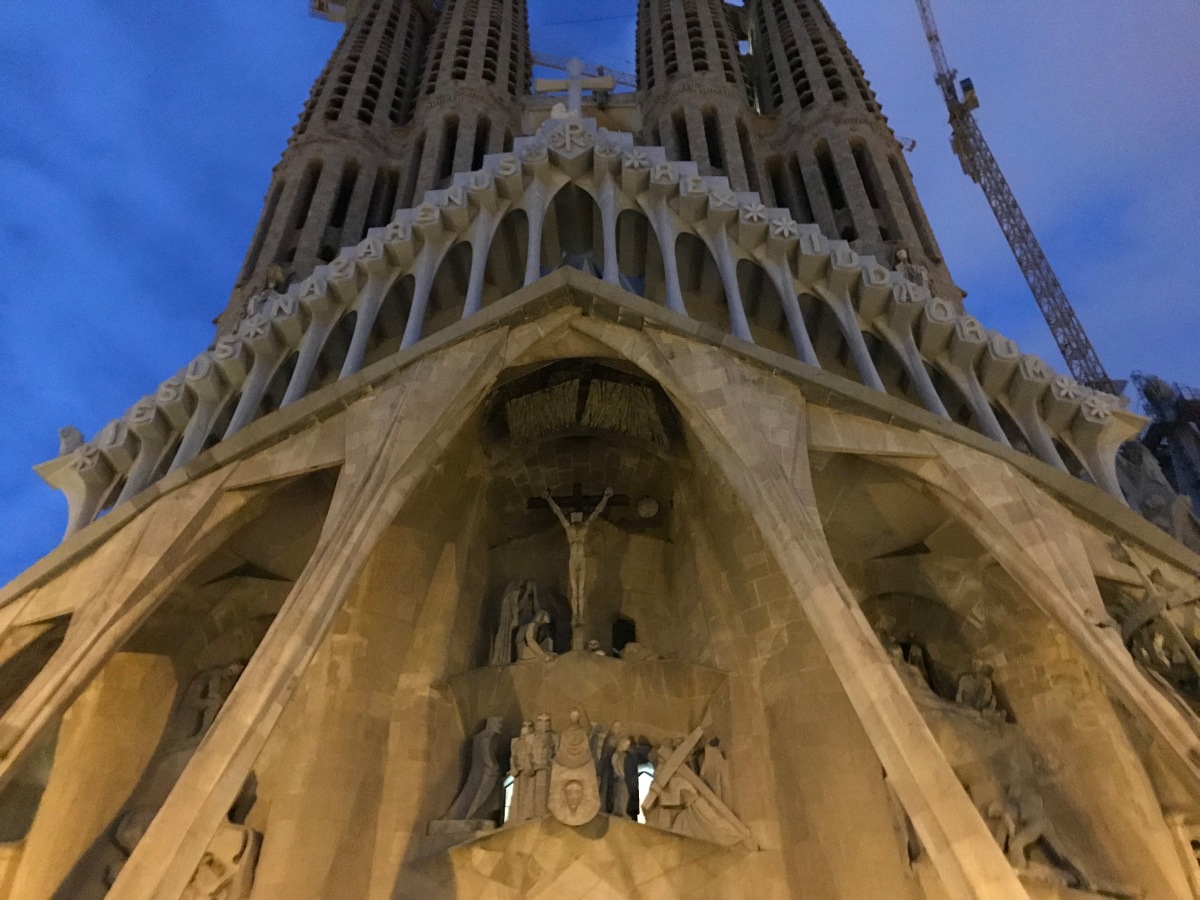 After my first decent night’s van sleep in Barcelona so far, I wake yet again to the sound of rain pattering off the fibreglass roof. Huh, I’ve come all the way to southern Spain, and I’ve brought the winter with me.

I spend the morning puttering about in the van, reading and listening to music. Tom doesn’t seem to be up yet as he’s not responding to messages, and by about 11:30 I decide to wander into town anyway, to somewhere near his place. I’ll get a coffee, do some writing, and see what happens.

As I start in on my cappuccino, he messages to tell me to come round – we’ve been invited to an afternoon do at his friend Daisy’s place, a birthday party for their friend Maria. Plus I can take advantage of his flat’s shower, being rather more effective than the van’s little closet.

As it turns out, this takes longer than we’d hoped since the bathroom is consistently occupied by a neverending stream of his flatmates. That’s ok though – we pass the time drinking tea and playing Dobble (*see earlier Cornwall-based posts).

Eventually we’re both showered, out, and on our way to Daisy’s. Tom’s concerned that he doesn’t have a birthday present for Maria, and we stop by a local grocer where he buys the BIGGEST bunch of grapes I’ve ever seen. Along with a banana. I like Tom’s concept of birthday presents.

Daisy and friends are a nice bunch, and have obviously already adopted the introverted but lovable Tom as one of their own. For a while, this makes me feel a bit excluded, like the lone outsider in a group of very close friends. I’ve been struggling with my self-confidence since my recent bout with depression. But I relax after a while, and start chatting. And we get on just fine – it’s a lovely afternoon, with pumpkin soup, birthday cakes, and funny stories. But still I’m a little uneasy.

Why? Well, this is the uncomfortable truth, dear reader.

I’m in love with Tom.

And he’s not in love with me. Rationally, I’ve always known that. We’ve been great friends for four years (and I really hope I don’t fuck that up), but until recently we were also friends… with benefits, as they say. But he’s moved on with his life, even as I’ve clung to an idealised version of him as the last good thing left from the wreckage of my old life. When he told me that he still wants to be friends, but without the ‘benefits’ part, it devastated me. I felt like Falstaff in Henry IV Pt2, when he’s rejected by his former friend Prince Hal, now King Henry V – “I know thee not, old man”. 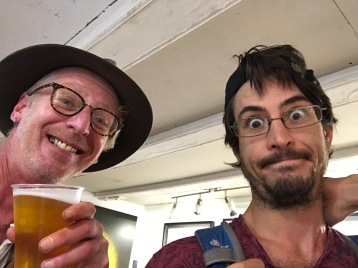 And or course I’m looking at this the wrong way round. I should be – and indeed am – thanking my lucky stars that he still wants to be friends. Because he’s a great friend, and more supportive through my recent tribulations than I had any right to expect. He’s always been there for me, and isn’t that worth more than some occasional sex?

Of course it is, but like the self-torturing idiot I am, I can’t leave the subject alone. He doesn’t deserve this, I know. I’m using him to fill a void left by the loss of my partner and my close friend. It’s too much of a burden for any one man to bear, and he does it with grace and understanding that I really don’t deserve.

But we’ve been dancing round the subject for days, me clumsily, him with obvious discomfort that, like a shit friend, I’ve ignored.  His non-committal answers are, very obviously, an attempt to protect my feelings. But I’m an idiot. Tonight,as we finally go to visit Gaudi’s famous La Sagrada Familia in all its floodlit glory, I force the issue and explain at some length how I feel.

He’s not surprised – he’s no fool after all. He gently asks me if I really want the answers to my questions. Addicted to picking my psychological scabs, I say yes. And he tells me he’s moved on, his self-confidence grown, he has a sex life of his own that I have no part in any more. He doesn’t think I’ve become unattractive, but he’s no longer attracted to me himself. He makes a few guesses as to why – I’ve become depressed, needy, neurotic, and want him too obsessively. But really, he doesn’t know why.

All this he tells me with a mixture of kindness and exasperation. I shouldn’t have forced the issue, I know, and I worry that I’m at great risk of losing a very good friend. It wouldn’t be the first time I’ve done this.

I realise how much I’ve obsessed over him, not healthily. Has this whole big adventure, its destination his new home, been about him all the time? Is my idea of following his example, travelling to become a teacher of English in other countries, founded in the fact that I not only want him, I want to BE him? Is my opinion of myself so low, and of him so high, that I think I’m worth nothing in comparison?

Possibly, maybe. But it doesn’t invalidate the idea, I’m sure of that – it’s become more than I ever imagined.

We talk, and putting my uncontrolled emotions aside for a whole, we both agree that, whatever the motive, it’s not a bad plan. I’m still trying to find some way to rebuild the wreckage of my life. Something new is needed. I have a few ideas; this is still the most practical of them. But I can’t just use it to follow him. If I’m to do this, I need to strike out on my own. If I want to do this in Barcelona, it CAN’T be because he’s here. I can’t use him as my emotional crutch any more.

It’s been a cathartic conversation, and Tom has told me some home truths I needed to hear. Whether I had the right to put him in that position is another question entirely, and it’s really my own good fortune that he’s a nice enough guy to still want to be friends afterwards. He would have had every right not to want to see me any more.

And I still can’t leave it alone. In my own defence, I’ve been through a really bad year. It’s not much of a defence for treating one of my remaining closest friends with so little respect, but that’s me all over I guess. We retreat to the nearby Irish pub (yes, another one), the Michael Collins (yes, another hero of the 1916 rising), and play a few more rounds of Dobble. And for that while, we’re just friends again. Nothing more complicated. And I still can’t sort my head out. 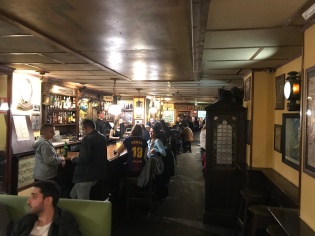 As it turns out, I end up sobbing all of this to him while he patiently holds me in his arms in front of Gaudi’s floodlit masterpiece. I. Do. Not. Fucking. Deserve. Him.

But I can’t keep doing this. And he has work tomorrow. I want another pint. We part, hugging. I can’t believe he still loves me enough to do that.

I return to the Michael Collins, and a morose Facebook conversation with my sister. Like an idiot, I don’t have many friends left who would understand the situation but aren’t mired right in the middle of it. After a while, I realise I can barely hold in the tears, and head back to the Metro, and Av Paral-lel, and a lonely climb up the Montjuic hill back to the van.

This, I think, is going to be the longest, darkest night of the soul I’ve ever had. I can’t sleep.

Which turns out to be just as well. About an hour later, I get a message from Tom, who I’d wondered if I’d ever hear from again. His “less than ideal” living situation has got worse. His druggy, rather unstable landlord has chucked out his flatmate, and physically assaulted him. He needs somewhere to stay. And I’m here for him.

How could I not be? I’m trying to sort my head out about him, but at the end of the day, he’s been a better friend than I deserve. And he deserves – more than deserves – the same from me. I’m genuinely worried about him, and don’t want to see him risking another night in that place. He’s going to need to pack all his belongings (not much, thankfully), and slog up the hill to Montjuic where the van is.

He gets there at 2:30 am, sweaty and looking traumatised. I give him a hug. I hope I’m starting to get reconciled to our new relationship, and it’s the genuine hug of a friend who’s concerned. We chat for a bit, and I hope I help him feel better. And yes, we do end up in bed together. Fully clothed. Sleeping. As friends.