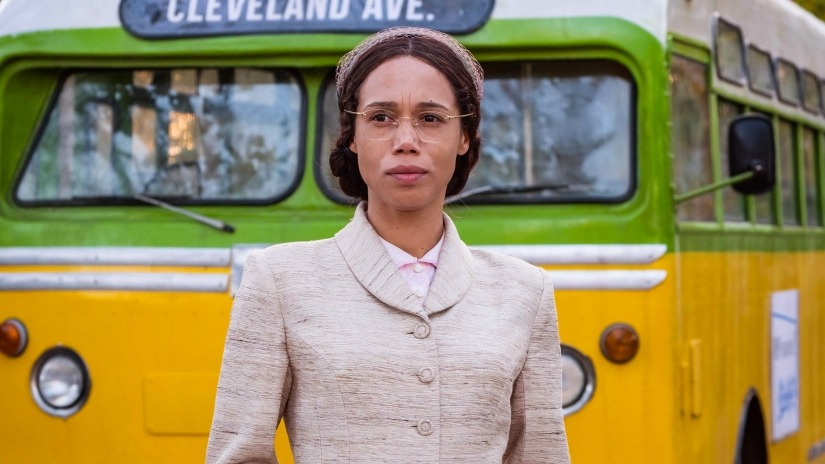 “Now we know what our task is. To keep history in order.”

Did I just watch an episode of Doctor Who or Quantum Leap? It’s not meant to be an unflattering comparison; despite the American show’s later, more saccharine notes, at its height it was capable of using a science fiction and historical background to tell immensely powerful historic dramas like this.

Quantum Leap in fact did a fair few episodes on the civil rights movement, some of which were outstanding drama. Which was why the setting here was so reminiscent, as was the plot – the Doctor and the gang trying to make sure history went the right way.

It’s often hard not to wince at the preachifying of the “very special episode” that covers an Important Issue, but the script here, by former Children’s Laureate Malorie Blackman, got the balance right. It wasn’t subtle, no; but then life under segregation couldn’t have been either. At the height of a Cold War against a totalitarian enemy, the American Deep South was enforcing racial segregation with techniques that wouldn’t have been at all unfamiliar to the KGB. The motel scene of the Doctor and Graham trying to stall the too-inquisitive Officer Mason caught that feel of paranoia, of social norms (such as they were) being enforced by fear with no room for dissent.

It was that atmosphere, and the (well-written) interplay between characters, that was the heart of the episode. Both the time-fixing plot and the paper thin (if pretty) villain were rather slim. But that often happens in episodes like these, that centre on character – think Vincent and the Doctor, another recent episode that foregrounded a historical figure and an Important Issue (mental health in that case).

Having a fairly slim plot to hang your script on allows the characters more time to breathe and develop, and that was the case here. Both regulars and guest characters were well-served, with Yaz finally seeming to get a sense of personality in her dialogue, which is well overdue. Ryan initially seemed to be played a bit too much for laughs (“wasn’t she the first black woman to drive a bus?”), but when he got that scene with Rosa Parks and Martin Luther King at the local NAACP meeting, Tosin Cole played the sense of starstruck wonder perfectly.

Obviously the casting of Rosa was the most pivotal part of the ep, and Vinette Robinson plays it right, with a sense of hard-won dignity and quiet courage. Robinson also, at least to this Englishman’s ear, pulls off a very convincing Alabama accent for a lady from Bradford.

I’ve heard in recent years that Rosa may have had her less pleasant sides, but this wasn’t the place for that portrayal (just as 1965’s The Crusade wasn’t likely to show King Richard I copping off with his favourite minstrel). Although this may be tackling an Important Issue, in many ways it’s a very traditional historical story that wouldn’t have been out of place in the Hartnell years (had the Hartnell years been a little more enlightened). What Rosa gives us is very much the “every schoolboy knows” version of history, in a slightly didactic fashion.

And there’s nothing at all wrong with that. In fact, it’s an indication of how much Doctor Who has moved on along with society that the heroic act of a seamstress in 1950s Alabama is every bit as important as the actions of an English king who’s been dead for eight centuries.

What has also moved on of course is the production values, especially with BBC America pitching in funding these days. So Montgomery, Alabama in 1955 was handsomely realised in every detail, in an obviously non-British, non-studio location (South Africa I believe). Little details like street signs, period vehicles, and even the advertising on the bus were all spot on.

The direction, by Mark Tonderai, was very much in the cinematic style this season has established, with plenty of visual flourishes like crane shots that would have been inconceivable in 1960s Who. Given the time period, more than once I found myself visually reminded of Back to the Future, and Robert Zemeckis is certainly a good director to aspire to.

I’m not at all surprised that Bradley Walsh continued to impress me this week with his portrayal of Graham. Obviously he can play comedy, so his introduction of himself as “Steve Jobs” to Officer Mason was funny and played well. But what struck me was how well he subtly conveyed barely hidden outrage in that scene playing pool with fanatically racist bus driver James Blake (Trevor White believably hateful as the episode’s real villain). Even while still flashing that so-British polite, friendly smile, Walsh conveyed his disgust perfectly with just a few small facial tics.

It helps that Graham is a well-written character, possibly more so than Ryan or Yaz. This is of course a white man who was in love with a black woman, who died recently; one of the things I’m liking about this season is that Grace’s death, and the grief it causes, hasn’t been just forgotten by the next episode. After all, Tegan seemed to get over having her aunt shrunk by the Master by the very next story.

Despite my criticisms of Chris Chibnall’s writing on the show over the years, I’ve been surprised and impressed at his attention to detail and realistic development of the actual characters. I don’t think we’ve seen an outstanding story yet, but it feels like the TARDIS crew are real people with former lives, backstories and personalities, who are already being changed by their time with the Doctor. And that’s better characterisation than, say, Vicki ever got. 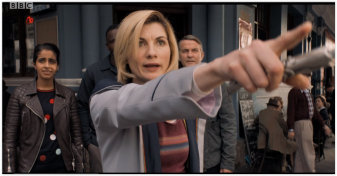 And I’m still liking Jodie as the Doctor, though I’m not sure she’s entirely settled as to how to play it yet. It seems to be a very similar portrayal to Matt Smith, with all that boundless energy and physicality as she randomly spouts what to most would seem nonsense (“good thing Elvis lent Frank that mobile phone against my specific instructions”). Then contrasted with, as Smith often did, still, quiet and earnest moments of moral outrage and anger – “I don’t recognise anyone of those descriptions”. Fair’s fair though, it took Peter Capaldi more than one season to figure out how he’d play the part. Influenced by predecessors or not, Jodie is very much the Doctor.

Despite a slim plot and a rather uncomplicated approach to the actual history, Rosa was a very powerful episode. That’s because, however life may have improved since the days of actual segregation, racism has not gone away, a point that was nicely underlined by having it as the motivation for a villain from far in the future. Particular kudos has to go to that short two handed scene between Ryan and Yaz in the alley, both detailing what they still go through as non-whites in the 21st century. And it’s perfectly in keeping with the show’s optimistic outlook that, despite all that, the scene ended with Yaz talking positively about the progress that has  been made (“and in 50 more years, who knows?”).

The show’s dealt with racism before of course – hardly surprising for a drama that celebrates difference and diversity as part of its central philosophy. But this was a direct approach to the subject that, even by 1989, was only being touched on by stories like Remembrance of the Daleks and Survival. It’s a hard one to do, but in celebrating this one moment of this great struggle in this way, I think Doctor Who got it right. While I don’t rate it as a “classic” Who story per se, I think it’s fair to say that it will be the first of Chibnall’s run that will really stick in viewers’ memories. As much as some of those Quantum Leap ones did for me.