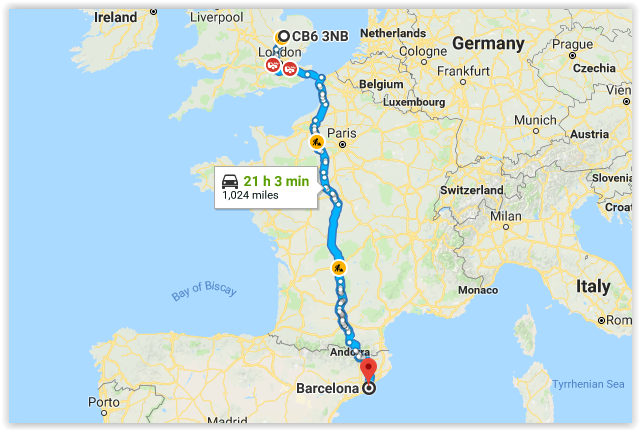 So, as mentioned in the last van-related post, I’ve been thinking of taking the plunge and doing a drive to mainland Europe. Well, thinking no more – it’s happening tomorrow!

This took a surprising amount of preparation. I already have RAC cover, but I had to call them up and add European breakdown cover just in case – for some bizarre reason in this day and age, you can’t do it online. I also had to call my insurer, who do actually cover me for driving in Europe, to tell them precisely when I’m going to be there.

Then there’s all the requirements for driving in Europe generally. You have to have a GB sticker (if you don’t have an EU licence plate, which I don’t). You need beam deflectors for your headlights, so they don’t shine in the usual leftward direction and dazzle oncoming traffic. You have to carry a warning triangle for breakdowns, along with a hi-vis jacket for every passenger. You have to carry a spare set of bulbs for the vehicle lights. If you wear glasses (I do), you have to make sure you have a spare pair with you. In France, it’s a legal requirement to carry two miniature breathalysers (there’s some doubt as to whether this is actually enforced, but better safe than sorry).

Fortunately, nearly all of this is available in the handy AA Euro Travel Kit, which I picked up from Halfords for the princely sum of £20. The one thing it doesn’t include is the breathalysers for France, but they sell those too, for £4 a pair – not too bad. I also picked up a 12v tyre inlfator and a can of Holts Tyreweld for punctures – no idea if that actually works, but worth a try just in case.

You also need to actually get to Europe. There were a couple of options – the ferry or the Eurotunnel. I chose the Eurotunnel; it’s about 50% more expensive, but it gets you there in comfort in 35 minutes, rather than a queasy wallow across the Channel in a slow boat for several hours. It’s surprisingly easy to book tickets – their online booking system is very easy to use. All told, it’s £199 – £106 to get to Calais, £93 to get back.

The plan is to have a lesiurely drive south through France and Spain, ultimately ending up in Barcelona, where my friend Tom (see earlier posts) is now teaching English. I’m not in any hurry to get there, which is fortunate. The route avoiding as many expensive toll roads as possible is 1024 miles, and Google maps estimates the journey time as 21 hours. My van being as slow as it is, of course, it’s probably more like 24 hours.

I want to end up in Barcelona no later than Friday, to catch up with Tom over the weekend, so that gives me five days to do the trip there. It’s plenty of time,, but I’d like to stop off and visit a few places on the way. Rouen is likely my first stop, followed by Orleans, Limoges and Toulouse (though I’m unlikely to have much time to spend in these places). Then across the Pyrennees mountains into Spain via Andorra, and then on to Barcelona.

I must admit, I’m a bit scared as well as excited. This is nearly two weeks of total self-sufficiency in unfamiliar surroundings. I’ve driven on the right hand side of the road before, in the USA, but never in a right hand drive vehicle – that’s going to be weird. Especially at roundabouts, which there are a lot of. I’ll have to get used to giving way to traffic from the left rather than the right.

And of course the languages are different. I know many Europeans speak good English, but I don’t want to rely on that. I have enough schoolboy French to get by (probably) in France, but my Spanish is limited to what I’ve picked up watching Robert Rodriguez movies, which isn’t much. I’m going to be reliant on Google a lot of the time (for navigation too), so I’m hoping the phone signal holds up when I need it to!

Then there’s those mountains. I’m not especially scared of heights, but a few years ago we did a drive around the island of Gran Canaria, and the narrow mountainside roads, with no safety barrier and a giant drop right next to you, were a tense experience. Particularly when impatient coach drivers blasted past at suicidal speeds, nearly knocking over all the roadside wreaths for accident victims scattered everywhere. The Pyrennees road looks, from what I can tell, not unlike that one.

Still, I’m hoping the excitement overcomes the trepidation. I can do this. I know I can. If all goes well I should have data access via my phone, so I’ll try to blog on the trip as frequently as I can. I’ll likely not be able to review (or even see) Doctor Who or The Walking Dead for the next couple of weekends, but I can do that when I get back. In the mean time, no spoilers please 🙂

So, keep your eyes peeled for more posts, hopefully starting tomorrow when I actually reach France and find somewhere to stay the night…