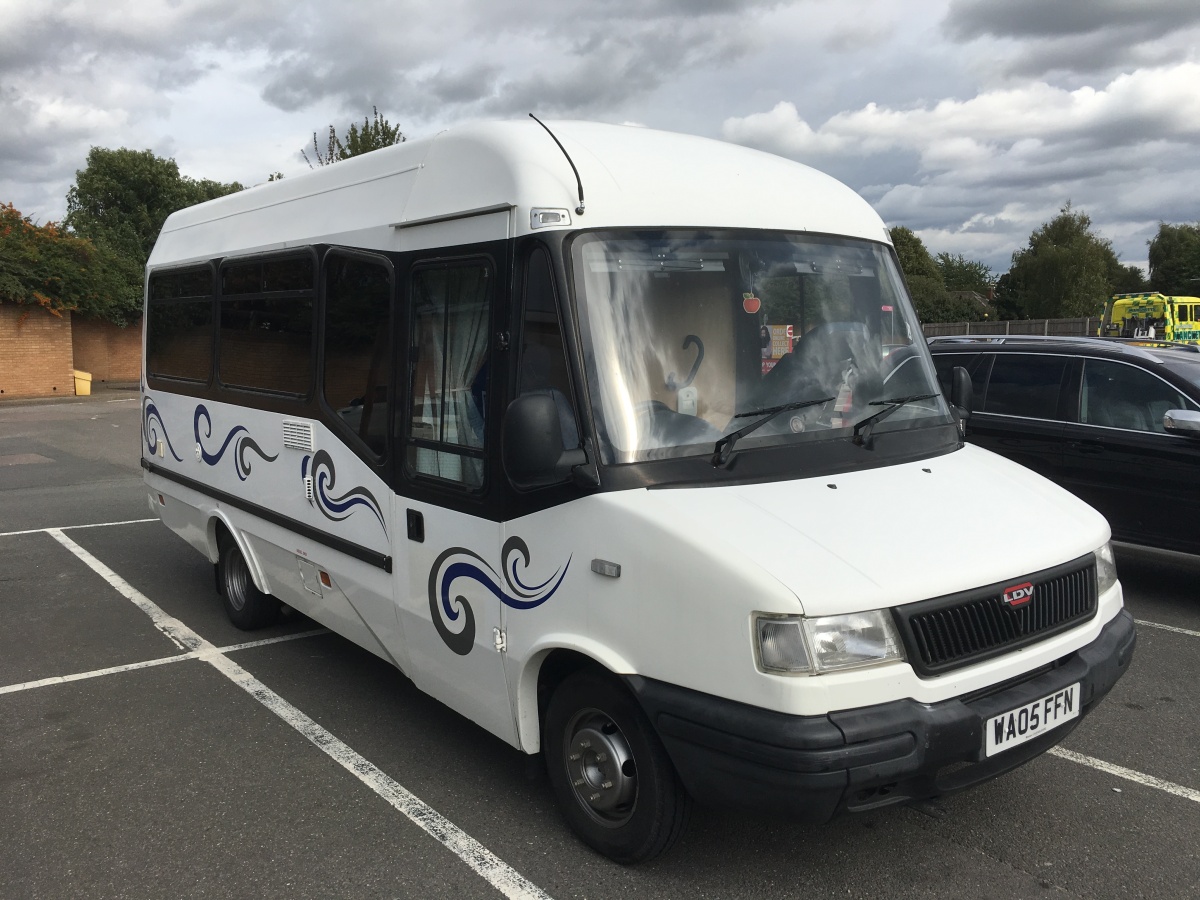 I wake up with a hangover.

I probably didn’t need that last can of Punk IPA (nor, if I’m honest, at least one of the preceding pints in the pub). Fortunately the bed is still comfy, so much so that I keep putting off the necessary trip to the hedge until my bladder is near to bursting. Then it’s back to bed; more music, read some comics on the iPad, and wait to feel better so I can drive back to Stretham in preparation for a full week in the van.

Feeling better is a relative thing, but by 10am my headache is… milder. I pile into the driver’s seat, and head off back to Stretham. Along the way, I’m slightly surprised to see someone waving at me from outside nearby pub the Waggon and Horses; this turns out to be Russ, a friend from Stretham who’s moved to Milton. He obviously recognised the van from the single photo I posted on Facebook – it must be distinctive!

Back in Stretham, I assess the success or failure of the previous night. Until I get a laptop sorted out, the projector is my only TV, and clearly I need something to project on more effectively than the whole of the van interior. My eyes light on my cherished framed cinema poster for the original Dawn of the Dead; could I somehow wedge it across the central passageway and project onto the back of it? I shove it in the van to check later.

I’ll also need enough food to last a week, and utensils to cook it with. Will the seemingly small bank of cupboards above the kitchen be big enough to fit enough stuff? As it turns out, yes – two pans, tow plates, two sets of cutlery and a bowl are the utensils, cunningly packed inside each other where possible.

For food, I bring two tins of Heinz Big Soup, two tins of Tesco beef curry, some packs of microwave rice (I have no microwave but you can heat them on the hob), a big pack of Alpen muesli and altogether too many Pot Noodles (three, in fact). And there’s still room in the cupboards for my toothmug, containing toothbrush and toothpaste, and a bar of soap! The towel is neatly hung from one of the many hooks conveniently spread around the interior. I only bring one – I figure I’ll mostly let the crockery dry on the draining board, but at a push it should be ok to use the same towel for drying dishes as for drying myself. After all, whichever thing it’s drying, dish or human,  will have just been cleaned…

Electronics go in the cupboards on the other side. Projector, speaker, iPad, iPad Mini, associated keyboards, chargers, and the great big 26800maH power bank I bought to keep everything charged without resorting to the leisure batteries. The thing took nearly 48 hours to actually charge itself, so should have enough juice for my purposes.

I’ll need some changes of clothes, obviously. I select five shirts, three pairs of trousers, five pairs of underwear and five pairs of socks. Along with the clean clothes I’ve already got on, that should be enough, I think. Surprisingly, it all fits into the cupboards under the sofa with plenty of room left over, so I shove a spare pair of Doc Martens in there too. That should do it.

But the most important thing left to sort out is the toilet. Given that it’s early afternoon by now, I head for the local pub, where I can be fairly sure of finding Gary, my friendly motorhome guru. Sure enough he turns up within minutes, and says he’ll be happy to help, so I bring the van to the pub. Means I get a chance to show it off too…

Everyone seems politely impressed (where I can hear them anyway), particularly Charlie, who’s happy that I can give her a lift home to Waterbeach along the way. Gary and his other half Carol then take me through how to get the toilet working – I’m glad I asked real people, as the instructions I found online were… sketchy.

So, there’s two doors on the outside of the bathroom wall, just behind the passenger seat. Upper one is for “pink liquid” apparently, which freshens the flush. I haven’t bought any of this. I’m reassured by Gary that it isn’t essential, and mainly makes the flush water (drawn from the main tank) smell nice.

However, the blue liquid, which breaks down the waste, is essential. It goes in the toilet “cassette”, an inventive compact gizmo which you withdraw through the lower door. You then turn a sort of ‘spout’ with a yellow lid, and pull out the top bit, which works as a measure. This gets filled with the blue liquid, which is then poured into the main tank. A couple of flushes (by means of a sophisticated handle/pump arrangement presumably based on a water pistol), then prime the tank with some water to dilute the fluid.

To drain the flush into the tank, you need to open the disconcertingly named “blade”. This is actually a little plastic shutter which swivels around the aperture in the bowl, cutting it off from the tank and therefore blocking any nasty niffs while the blue liquid does its stuff. I’m going to have to remember to open this before using the toilet, and close it after. I wonder how long it will take before I absently forget to do it because the need is urgent…

All toileted up, I head for Cambridge, dropping Charlie off in Waterbeach along the way. I have a place in mind to park up for the week, one of several streets off Mill Road, near Malta Road where my friend Layla lives. All have unrestricted free parking, but I don’t want to be inconsiderate, so I want a spot not too close to a drive, where my rather high vehicle won’t block anyone’s house window from the sunlight.

Luckily, I find such a spot almost immediately. In fact, I later found out there were several other places which would have been a few minutes nearer to work, but I didn’t want to take the risk and took the first one I found. Fingers crossed it causes no offence to any residents, but I have to be prepared to move on if asked, so I’ll continue scoping out other possibilities.

Good spot found, I trot a couple of streets down to Layla’s, and invite her to the pub. There’s an old place at the end of Malta Road called the Royal Standard, which used to be a very trad, spit-and-sawdust kind of place, but has recently been renovated as a sort of craft ale-worshipping Cambridge hipster bar, with lots of rather expensive Belgian beers. It’s nice enough though, so Layla and I have a couple of pints in the pleasantly mild outdoor area.

Layla’s a teacher, and tomorrow is her first day back at school after the summer hols. I have to think about my first walk from the van to work. So neither of us drink much – I have two pints, Layla a pint and a half, of a nice IPA called Pulping on Your Stereo with “hints of orange”, which costs less than the Belgian stuff. Then it’s off home for both of us. Home, in my case, being an LDV Convoy.

Settling in, I try my “back of the framed poster” approach to TV projection. It’s marginally successful; the frame wedges into the middle of the van at an odd angle, so the picture has to be kept small to fit on it, which is achieved by dint of moving the projector further down the table; and the backing paper is brown, so the colour’s a bit off. Still, it works, so I watch Mock the Week, which I had downloaded onto the projector’s internal memory from iPlayer while still at the house. With no laptop and no portable wifi as yet, the projector’s internal memory is all I can play from (I did try syncing some movies from Plex to my iPad, but it turned out I’d filled up the memory with downloaded comic books).

Annoyingly, a glitch (I assume it’s a glitch) in the Android iPlayer app the projector uses means that watching iPlayer doesn’t register as activity, so the thing goes into auto-shutdown every fifteen minutes when you’re watching it. I can persevere for now, though – when I get a laptop, I assume the HDMI connection won’t suffer from the same glitch. Still, I hope an update sorts that out, it’s such a great bit of kit otherwise.

Settling into bed, I discover something I hadn’t really thought about when parking at the side of a street. The camber of the road means that you’re parked on a slant, and my bed, which runs across the width of the van, therefore had a gentle downwards slope to it. Thankfully, my head was at the top of that – I suspect I might have found sleep harder with my feet higher than my head.