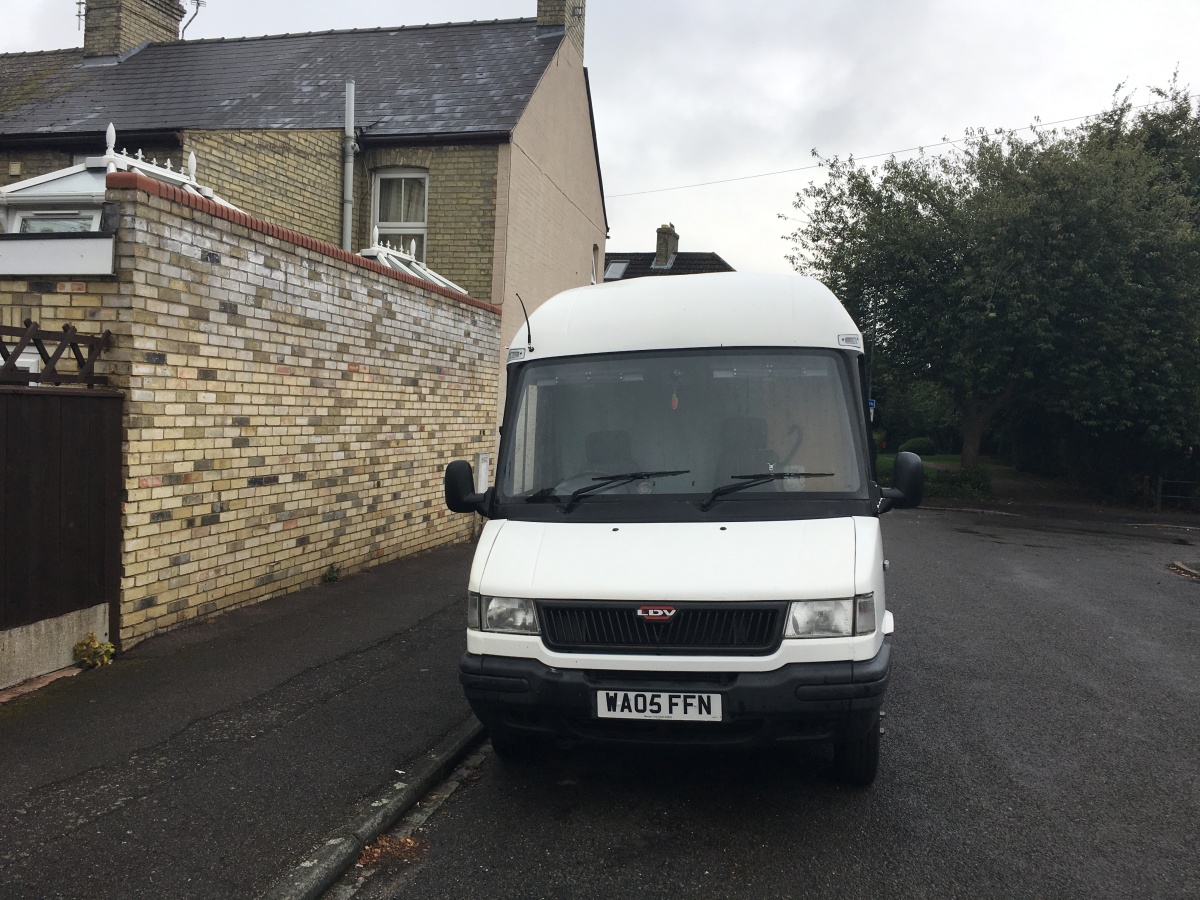 The first day walking to work from the van!

First though, time to use the toilet for the morning ablutions. Thankfully, I remember to open the blade before weeing into it, and close it after flushing. Seems fine, and should present no problems for the rest of the week.

I also have to make my first cup of tea in the van. Fortunately, a bit of reading had showed me how to work the cooker – you have to hold the gas knob in for ten seconds or so after lighting it, just like the fridge, as a safety measure. Turning on the water pump, I fill a pan from the tap (I haven’t yet found anywhere with a stove top kettle in stock), boil it (fairly quick), and tea is forthcoming. Nice. Then off to work…

I had expected to walk down Mill Road to get to the station, and from there to my work’s swanky new building. But a quick check of Googlemaps revealed a quicker, cleverer route through leafy suburban back streets that got me there in 25 minutes – less time than my usual drive from Stretham, and certainly less than the nearly 90 it often takes to get back there in the evening rush hour. Plus, no petrol or train fare to pay for – result! The exercise may even do me some good…

At work, an idea strikes me to improve the improvised projection screen. We have an A0 printer, which is used to make REALLY big printouts and runs from a roll of very wide, white paper. A bit of fiddling gets the roll uncoupled, and I cut off a nice big stretch of it, then ‘acquire’ some drawing pins from the stationery cupboard.

After walking back with this rolled under my arm, I pin it across the central passage of the van, tacking it to the kitchen cupboards on one side and the bathroom wall on the other. And it’s better than the back of the poster, but trying it in moderate light means that you can see the creases where it was rolled more than the actual picture.

Much better in twilight though, and excellent after dark. With the nights drawing in, it should be useable most of the time soon. 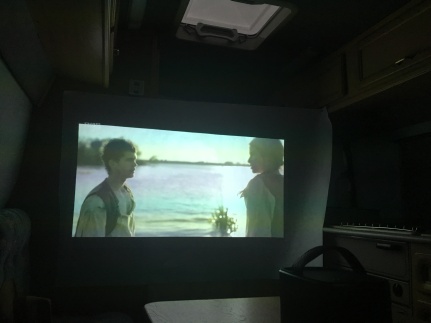 First attempt at cooking, so I go for something simple – a large can of Heinz Big Soup. These are actually really filling, especially in the larger cans, and the big chunks of meat and veg in them mean they’re more like a casserole than a soup. Of course, I have to account for the slight angle the van is sitting at, so the pan holds more soup at one side than the other, meaning plenty of stirring is required. It also has a nasty habit of slyly starting to slide off the hob towards the window, so attention is definitely required.

Not too onerous though, and I feel a sense of achievement at my first meal cooked (well, heated up) in my new home.

It’s too light yet for the projector to be much use, so I lie down, have a bit of a vape, and spend the next hour or so passing the time enjoyably with some comics on the iPad. After the light fades enough for the projector to be effective, I watch a couple of eps of a Spanish drama called La Peste (The Plague) which I’d previously downloaded from BBC iPlayer. With no mobile wifi as yet, I don’t want to eat up my 5GB monthly 4G data allowance, so downloads it is.

La Peste is pretty gripping – a drama set in late 16th century Seville, against the backdrop of a plague epidemic, with a sort of Sherlock Holmes feel – a previously convicted heretic agrees to act as detective for the Inquisition to solve a string of murders, in return for his heresy conviction being quashed before he’s burned at the stake. I recommend it, unless you’re one of those people who’s put off by subtitles.

Trouble is, it’s so gripping I burn through two eps and don’t have much left to watch. But I’d wanted to go for a couple of pints with Layla anyway, so she kindly agrees to let me leave the projector at hers connected to the wifi while we chat. By the time we get back, I’ve got the next couple of eps of La Peste and all the currently available eps of hot BBC drama The Bodyguard. Should keep me busy.

Again, we only have a couple of drinks (well, even fewer for Layla), so it’s off to bed for a nice early night at about 10:30. Just these few days of van living have drastically reduced my tendency towards excessive alcohol consumption, which can only be a good thing.

Comfy though the bed is, my sleep is fitful, with occasional periods of wakefulness. I think this may be down to the bright streetlighting outside the van, coupled with the skylights and the fairly thin rollerblinds over the windows. It always seems a bit too light in there for me to sleep heavily. I’m going to have to look into thicker blinds and some kind of shutters for the skylights, I think.