“They came together as an answer to defeat.”

The Walkers may be learning to talk, but it’ll be a while before they’re as talky as this episode was. Written by Vivian Tse and directed by former cast member Michael Cudlitz (Abraham), this was intended as a character piece; but with comparatively little plot advancement or Walker action, it seemed more like a post-apocalyptic soap opera than anything else.

END_OF_DOCUMENT_TOKEN_TO_BE_REPLACED

“I found myself. Some version of myself, a better self. Still, it always feels like it could just be swept away again. But that doesn’t mean it will, and it doesn’t mean I couldn’t find myself again if it does.”

It suddenly occurred to me, watching this episode, that this season of The Walking Dead is nearly at an end – only two more eps to go after this one. I really hadn’t noticed, as the increasingly draggy All Out War plot has shown very little sign of building momentum, just ambling along, mostly uninterestingly, with no apparent end in sight. If it was World War 2, it would be early 1943 – each side has had some significant gains and losses, but palpable victory for either doesn’t seem in sight yet. END_OF_DOCUMENT_TOKEN_TO_BE_REPLACED

After several weeks of uninspiring episodes full of sound and fury signifying tedium, The Walking Dead made an unexpected (at least partial) recovery this week, with the most satisfying ep of the season so far. The show’s usually at its best when striking a good balance between character work and action; recent episodes have failed at this because they’ve told us nothing new about the characters, and not presented us with any action the likes of which we haven’t seen a hundred times. END_OF_DOCUMENT_TOKEN_TO_BE_REPLACED

Just one more ep to go of this season, and for the second week in a row the denizens of The Walking Dead are acting pretty stupidly, with yet more inadvisable expeditions beyond Alexandria’s comforting walls on the eve of war. As some consolation, at least their motives this week made more sense than last week’s. Daryl was motivated by guilt and hotheaded rage, Carol by her conscience, and the rest because they cared about the idiots who’d already gone out there. END_OF_DOCUMENT_TOKEN_TO_BE_REPLACED

“How do you just live, when that’s the world?” 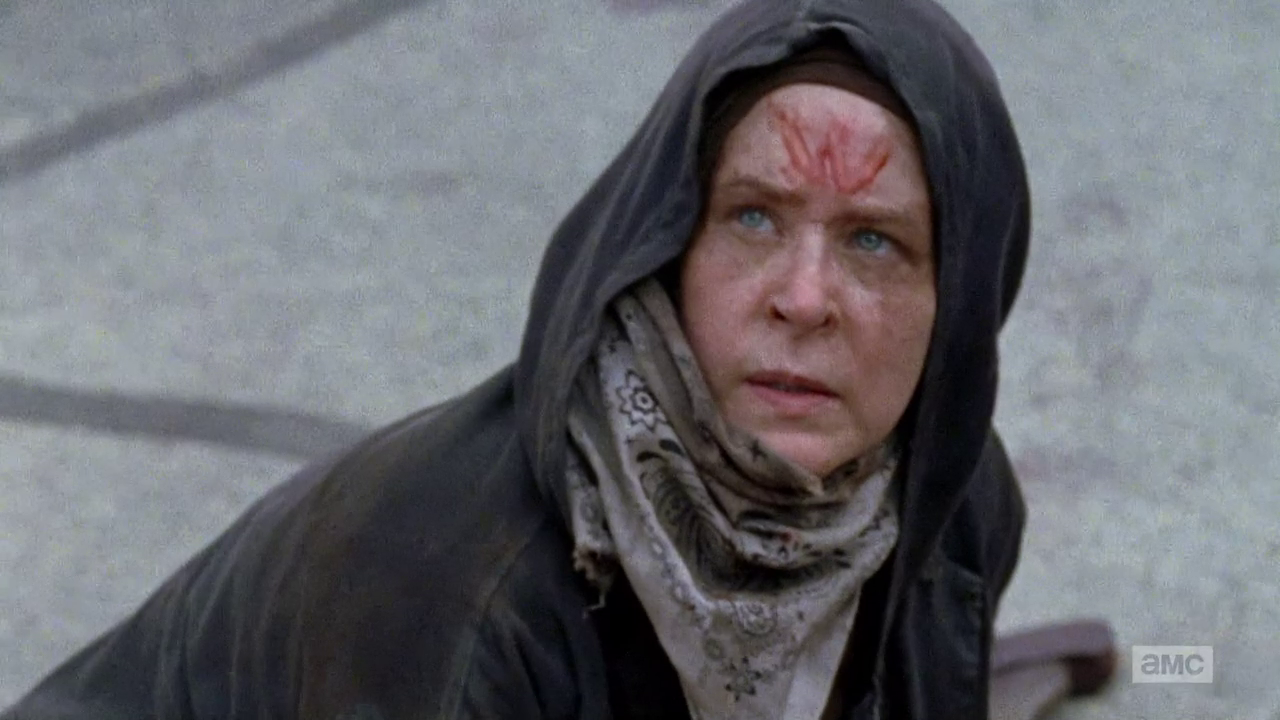 After last week’s lesson about how ill-prepared they were to deal with the dead, this week’s Walking Dead saw the pampered Alexandrians get slapped in the face by the real world again – only this time by the living. I wasn’t entirely surprised to find that the blaring truck horn distracting the Walker herd at the end of last week was caused by the Wolves – I’d been expecting them to turn up. But I’d thought the show might have given the Alexandrians a little breathing room between dealing with hundreds of Walkers and the marauding living. Not a bit of it – The Walking Dead isn’t a show to give its characters a break. END_OF_DOCUMENT_TOKEN_TO_BE_REPLACED

“You’re not who you were, and neither am I. I don’t know if I believe in God any more, or Heaven, but if I’m going to Hell, I’m making damn sure I hold it off as long as I can.”

This week’s The Walking Dead found us rejoining the plot thread involving the show’s two fan favourite characters with the rhyming names, Carol and Daryl; though the ep as a whole was properly devoted to her rather than him. And that’s a good thing. No disrespect to Beth or Abraham, who’ve been the focus of the last two eps, but Carol’s a fan favourite for a reason – her character arc has been probably the most powerful of the show, played with quiet dignity and intensity by Melissa McBride. Some extremely good writing this week from Matthew Negrete and Corey Reed gave her plenty of meat to chew on this week, and the result was another quietly devastating episode to rank with last season’s The Grove.

END_OF_DOCUMENT_TOKEN_TO_BE_REPLACED

“You’re either the butcher – or the cattle.”

Hallowe’en being nearly upon us, ‘tis the time of year for a new season of AMC’s The Walking Dead. The last season was frustratingly uneven, with a first half that seemed to pack in all the plot and action and a second half that can best be characterised as aimless wandering around the countryside and sometimes encountering zombies. The first half was thrilling, the second half thoughtful; ideally you want a season (like the one before that) which balances both more evenly.

END_OF_DOCUMENT_TOKEN_TO_BE_REPLACED

“Sometimes we have to kill them. I know that. But sometimes we don’t.”

Has The Walking Dead gone too far? It’s always been a show that’s gone to some very dark places, but last night’s ep was probably the darkest of all; so unremittingly grim and bleak in its worldview, and showing us possibly the nastiest conceivable consequences of the post-apocalypse world. It was not easy viewing.

END_OF_DOCUMENT_TOKEN_TO_BE_REPLACED

Hello again, faithful readers (all several of you)! As usual this time of year, my reviews have been delayed by a sojourn to sunny Los Angeles, and the Gallifrey One Doctor Who convention. Consequently, I’ve missed covering two eps of The Walking Dead since it returned from its mid-season break, so I figured I’d do them both in one bumper post – with this week’s to follow tomorrow – jetlag permitting!

END_OF_DOCUMENT_TOKEN_TO_BE_REPLACED

“We all change. We all don’t get to be the same way we started.”

A more somber than usual episode of The Walking Dead this week, but not because of the usual bleak apocalyptic scenario. This week’s script, by new comer Matthew Negrete, was a more intimate affair than usual, focusing on the show’s characters; delving deeper into the ones we know, and establishing depth for the new characters too.